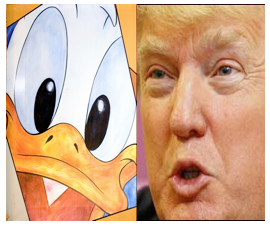 Not very long ago, I wrote a CityWatch piece on the movie "Tomorrowland", which decried the snarky, critical negativity of the last few decades that took over the former optimism of what Disney's Tomorrowland was all about. Unfortunately, the movie was misunderstood and attacked with that same negativity...a negativity that scorns what Walt Disney and his Disneyland/Disneyworld was all about.

Unfortunately, that same cynical approach of looking at the world through a glass half-empty is not worthy of the optimism that Presidents John F. Kennedy and Ronald Reagan once projected.  And which FDR, Truman, Eisenhower, Shirley Temple, Jimmy Stewart and Walt Disney once projected.

And which the iconic series "Star Trek" of Gene Roddenberry was all about.

Those political and cultural leaders embodied and projected optimism and visionary ideas, while the cynicism and enjoyment of dragging the world down that has supplanted their collective optimistic vision is more akin to a rebellious, embittered teenager than a courageous adult who knows the challenges but inspires us all to move ahead, anyhow.

However, it is with no ill intent to the makers of the movie "Tomorrowland" that the funders of the movie--Disney itself--is itself in large part to blame.  Walt Disney was a Republican, but rather than the cariacature of a tight-fisted Republican his modus operandi was to spend whatever it took to make sure his Disneyland and Disneyworld were what American families would want.

Walt Disney let his brother be the one who would tap him on the shoulder when Disney was approaching bankruptcy, and only then would Walt let his spending slow down.  Walt and his family wanted Disneyland to be affordable for middle-class families, and for Disneyland workers to be treated and paid with respect for their loyalty and hard work.

Now Disney is dominated by Democratic leadership and donations.  The Tomorrowland of today at Disneyland is more retro-1950's than any true Tomorrowland of 2015 (in large part because current Disney leadership refuses to spend money to upgrade and expand its amusement parks), and is certainly NOT what Walt Disney would push for:

1) Right now, BOTH political parties are at war with themselves for a grassroots approach that eschews the wealthy elites of Wall Street and the world, yet the domination of the Investor over the Worker at Disney (and everywhere else) is an issue that threatens our nation and way of life--particularly because of how this domination threatens the middle class.

American investors, by and large, invest in mutual funds and don't own stock directly. Those who do own stock directly (and that includes the aforementioned mutual funds) operate in a profit-only driven manner and have little to no interest or heart for the workers that make Disney and other organizations profitable and thrive.

And in so doing, the overwhelming priority of the Investor over the Worker threatens to drag down the future of many (if not most) American corporations, and are making the average American's life miserable.

This occurrence is despite the reality that the overwhelming majority of most investors (particularly middle class investors) have NO interest in destroying worker rights and priorities...because what comes around goes around, and without a thriving Main Street, Wall Street must inevitably collapse as well.

2) Enter "The Donald" who is now behaving more like Donald Duck than Trump the successful businessman.  Yes, his Donald Duck-like bluster and hard-to-understand rhetoric attracts the ire of many frustrated Americans (of both parties) who recognize that both the American middle class culture and upward mobility of native-born/legal immigrant workers are under attack.

Yet Rupert Murdoch and other conservatives are decrying Trump as someone who is misstating the facts and throwing heat instead of light at the issue. Mexican and other immigrants have much lower crime rates than native-born Americans.

Former Texas Governor Rick Perry and other GOP candidates have been particularly critical of Trump.

Certainly, the lack of illegal immigrant oversight, and the "sanctuary city" approach to dealing with lawbreaking and felonies performed by illegal immigrants is a big problem--as recently pointed out by my fellow CityWatch contributor Paul Hatfield.

And the horrific plan to fire and outsource loyal Disney workers with Indian immigrants is one that Walt Disney and his Republican/pro-worker ideals would never have tolerated.

This at a time when the "conservative, religious and moral" Walton Family of today has created years of resentment and working poor because of the way it underpays its workers.  It's no secret that "conservative" and "liberal" large employers have pulled the floor out from under their workers, despite their "pro-worker" or "pro-family" affiliation that is publicly associated with one political party or another.

3) We now have a Democratic/Republican Redux where the party's leadership has left its constituents out in the cold, leaving them leaderless and looking for icons of principal to restore optimism.

Yes, there are the rah-rah Democrats, and the booyah Republicans, but by and large the Democratic Party has abandoned its base to the fury of many, and the Republican Party has trashed and quashed multiple attempts to reform itself (the Tea Party is only the latest reform attempt).

Too many Democrats have incestuous ties to megawealthy Wall Street donors, and too many Republicans have scorned the rights and needs of hard-working American workers and families.  Too many from both parties have prioritized the needs of law-breaking employers and illegal immigrants over law-abiding employers and families, and have done so in a manner that promotes self-interest over kindness and caring.

Walt Disney has long since passed on, and Donald Trump will almost certainly be rejected by both GOP and other voters once his own flip-flop past becomes more well-known to Americans, but one truism still remains:

Until we restore a sense of decency, kindness, and optimism to our society, the ability of either political party to restore a sense of fairness and opportunity in our country is non-existent, and is a crisis that must be both confronted and reformed.

(Ken Alpern is a Westside Village Zone Director and Board member of the Mar Vista Community Council (MVCC), previously co-chaired its Planning and Outreach Committees, and currently is Co-Chair of its MVCC Transportation/Infrastructure Committee. He is co-chair of the CD11Transportation Advisory Committee and chairs the nonprofit Transit Coalition, and can be reached at  Alpern@MarVista.org   He also does regular commentary on the Mark Isler Radio Show on AM 870, and co-chairs the grassroots Friends of the Green Line at www.fogl.us. The views expressed in this article are solely those of Mr. Alpern.)