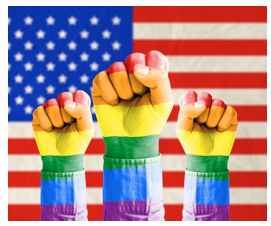 LGBT ACTIVISM … WHAT’S NEXT-The world cheered as U.S. Women’s soccer star Abby Wambach gave her spouse, Sarah Huffman, a “groundbreaking kiss” celebrating the team’s World Cup victory over the weekend. It was a fitting epilogue to a historic Pride month, as the Supreme Court acknowledged marriage as a legal right for same-sex couples across the nation and the White House replied with a rainbow light-show.

But June was also the month when Jennicet Gutierrez was booed when she interrupted President Barack Obama to address the plight of transgender immigrants locked in detention centers.

Meanwhile, groups of activists led by queer people of color interrupted pride parades in Chicago and Boston to focus attention on the most marginalized members of the LGBT community.

In the midst of the historic victory for marriage equality, the question now facing the LGBT movement is not what wall to knock down next, but whether the community will stick together in this new post-marriage phase of the ongoing fight for full lived equality.

Those are tough new issues that connect to our country’s economic and racial disparities, and they can’t be romanticized with a rainbow filter on Facebook.

The rainbow colors of the flags that wave at Pride parades are meant to celebrate the diversity of a community that includes people who identify as lesbian, gay, bisexual, transgender, queer, and—all the rest. That list is longer than some Americans will admit.

But this year, Pride Month started with the leak of a damning report about the lack of diversity at the Human Rights Campaign, one of the movement’s most powerful organizations. The airing of HRC’s dirty laundry focused attention on the “white men’s club” environment inside of the organization but also echoed longstanding concerns among some activists about the overwhelming whiteness and maleness of the paid leadership of LGBT organizations overall.

The focus on gay marriage for the past decade of LGBT organizing reflects the political dominance of what journalist J. Bryan Lowder calls a “certain class of queer—wealthier white gay men in particular.”

Now that the feel-good issue of marriage has been won, some of us are wondering whether straight allies and the so-called “A-gays”—the movement’s donor class and power brokers—will still cast their lot with queer folks who face the threat of homelessness, violence, and discrimination. Those are tough issues that connect to our country’s economic and racial disparities, and they can’t be romanticized with a rainbow filter on Facebook.

Already, the long-feared post-marriage exodus of moneyed gays has threatened to close one organization. At the end of June, Equality Maryland posted a statement about the difficult financial times they have endured since 2012, when Maryland became the first state to extend marriage rights to same-sex couples by popular vote. The organization reported that “funding from individuals and major donor sources dropped significantly after securing marriage equality.”

Then there’s Freedom to Marry, the national campaign founded in 2003 for marriage equality, which announced that, after having won the battle for marriage, it’ll close its doors later this year. In an editorial that ran on the day of the Court’s ruling, the campaign’s founder, Evan Wolfson, pointed to non-discrimination protections as “what’s next in the fight for gay equality.”

This pivot to non-discrimination has been in the works for years. And organizations have been preparing for this crossroads point by strengthening relationships with traditional civil rights groups, diversifying the base of activists, and working to expand awareness that a gay person can get “married on Sunday, but fired on Monday.”

But that slogan presumes that the LGBT people at risk of being fired have been passing for straight—a privilege that many transgender people (not to mention butch lesbians and effeminate gay men) don’t enjoy. As trans and queer activists of color increasingly demand visibility in ways that offend the sensibilities of “respectable” gay white men, the LGBT movement is having to come to grips with “the full nature of its challenges and the genuine diversity of its constituents.”

Grassroots activists know that passing the Employment Nondiscrimination Act won’t be the end of the struggle for equality any more than the recent Supreme Court decision was. The LGBT movement needs organizations on the ground that serve, organize, and advocate for elements of the LGBT community that have been made less visible in the campaign to prove gay people’s respectability and worthiness of marriage.

But the question facing the movement is whether those organizations will get the support they need to continue their work now that marriage is done.

(Sean Thomas-Breitfeld is co-director of the Building Movement Project, which has worked since 2013 to support the future of the LGBT movement. He is a fellow with The OpEd Project's Greenhouse at the Center for Global Policy Solutions. Thomas-Breitfeld writes for the excellent Pacific Standard Magazine … where this piece was first posted.)