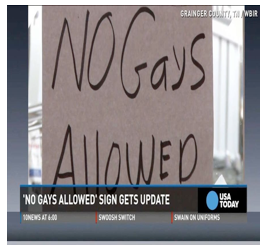 GUEST WORDS-Last week, a Tennessee retailer made headlines when he took the whole we-won't-bake-cakes-for-gay-weddings thing to the next level. In response to last week's Supreme Court marriage ruling, Jeff Amyx, owner of Amyx Hardware, taped a "No Gays Allowed" sign to his storefront window. Amyx, who is also a Baptist minister, explained to WATE 6 News that he realized gay people are not afraid to stand up for themselves so he hung the sign to "let the homosexual people know that there are Christian people that are willing to take a stand." He said he wasn't worried about business suffering and had no intentions of taking the sign down.

But the very next day, he backpedaled, replacing the original sign with this watered-down version: "We reserve the right to refuse service to anyone who would violate our rights of freedom of speech and freedom of religion." Amyx said he'd been encouraged by friends to "make it a little nicer because I'm a very blunt person."

I object to this change in signage. It obscures the message, which now sounds like it applies only to communist dictators. As a strong supporter of freedom of speech and freedom of religion, I never would have thought that sign applied to me and would have walked right on in to buy myself a hammer and a nail -- only to be swiftly ejected when my flannel shirt and Birkenstocks set off the no-gays detector. (All hypothetical. Contrary to the stereotype of the toolbox-toting lesbian, hardware stores give me hives and I make it my business to avoid them, regardless of the religious proclivities and lifestyles of their proprietors.)

Frankly, I've had it with the narcissistic assumption that gay folks are dying to get into any straight club that doesn't want them. So let me be clear about a few things: I do not want to order a wedding cake from a bakery owned by a guy who thinks I'm going to hell. I have no desire to purchase bouquets from a florist who pickets Pride parades. I wouldn't serve pizza at a wedding if the owner paid me and offered to serenade my guests with an acappella version of "Born This Way."

And finally, the suggestion that I would be insane enough to want to force a homophobic clergyperson to preside over my most sacred day is beyond insulting. I'm a lesbian who was raised Orthodox Jewish and even I am not that self-hating. 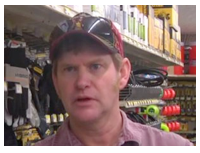 So I say to Amyx (photo right) and others of his ilk, be blunt. If your message is "No Gays Allowed," then put it out there, loud and proud. Let me know you don't want me in your store, and I'll steer clear. And please, hang similar signage if you dream of excluding Jews, African-Americans or any other minority group, because that will likewise inform my decisions as a consumer.

The real problem I have is with all those underground haters. The ones who don't have a sign out front, yet silently seethe about my "lifestyle," who happily take my money and then give it to the National Organization for Marriage or the Family Research Council or some other group that will use it to try to strip me of my civil rights.

If you don't support my freedom to marry, have the guts to come out about it. Exercise your constitutional right to free speech, and I'll support that. Then I'll exercise my capitalist right to shop from your competitor--and to proudly put my money where my allies are.

(C.J. Prince is Executive Director of North Jersey Pride. He blogs at Huffington Post … where this piece was first posted.)