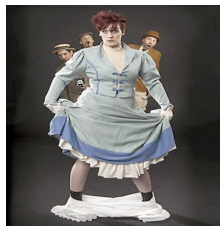 GELFAND’S WORLD-Guilt is not a new topic in drama, nor is sexual comedy. Vaclav Havel is known to Americans as that unlikely combination, a playwright who became the president of Czechoslovakia. For the next couple of weekends, Havel's Vanek trilogy is on display in San Pedro, [http://www.sanpedrorep.org/] alternating with Steve Martin's The Underpants.

The Underpants is a must-see, as it showcases talented comedic acting carried off at an exhausting pace along with some imaginative staging. The current production finds the comic version of a feminist message through its portrayal of lovesick men, a bourgeois husband who is the personification of the patriarchal attitude, and a young actress who delivers a tour de force performance as the wife.

The Underpants was adapted by Steve Martin from a 1910 German comedy. This production is what the critics like to call kinetic. It's physical comedy raised to the limit, by parts zany, seductive, and absurdist in its own right. More about a remarkable performance of the Steve Martin farce below.

The one-acts by Havel are the opposite. They are somewhat wordy meditations on the human condition as experienced in a totalitarian society. They were constructed as hard satires during the period when Czechoslovakia was a Soviet puppet state. Yet they are full of meaning in this post-Soviet era, not the least for us residents of a wealthy democracy.

The Havel plays deal with people full of guilt. They suffer inwardly because they have collaborated with a dictatorship. They want absolution, but won't go so far as to join the rebels. Havel's character and alter-ego Ferdinand Vanek is himself a rebel and a freedom fighter. The other characters respect him for what he is, even as they resent him for being better than they can ever be.

The three plays forming the trilogy are Audience, The Unveiling, and Protest. They were written as semi-autobiographical sketches in which Havel, through his character Vanek, lives his post-prison life and encounters former friends and in one case, his boss.

In The Audience, Vanek is forced to meet with his boss, the foreman at the brewery where Vanek has managed to find some low paying work. In The Unveiling, Vanek visits a married couple he used to know, as they parade their newly acquired acquisitions and feigned happiness before him. In The Protest, he meets with a former colleague who calls on him to develop a political protest to free an unjustly imprisoned musician.

These people in Vanek's life all have a problem. You might say they all have the same problem. They have sold out to a repressive regime in order to gain material goods or just to achieve a little bit of physical security in an always dangerous and overpowering state.

In The Audience, theater company directors Chris Lang and Aaron Ganz play the boss and Vanek, respectively. Lang is the foreman in a brewery. Vanek, fresh out of prison, is forced to meet with his foreman and to endure a drunken monolog that is part social satire, part political message, and part theater of the absurd. The construction of this piece involves a repetitive sequence of interrogations by the foreman involving superficially safe questions such as, "Have you had your tea break yet?" and "We're friends, aren't we?" "Why aren't you drinking?"

But it becomes obvious that this is all a subterfuge in which the foreman has been instructed to spy on Vanek, and Vanek is being asked to become an informer.

The dramatic tension begins to reveal itself. We learn that Vanek is a man of principle who endured prison rather than give in to the regime, and now refuses to inform. The brewery foreman slowly unravels, revealing to the audience that he hates what he himself has become, and is forced to carry on the way he does because he lacks Vanek's courage and independence of spirit.

Not everyone can be a hero, or will be a hero. It's the age-old story. The majority go along to get along, whatever the regime.

Chris Lang portrays the foreman as somebody who is trying to act the bully in order to carry out his orders, but lacks that inner nastiness that would give him some chance of success. Aaron Ganz depicts Vanek as calm and conciliatory almost to excess, using only a shy smile to communicate his unease with the demands that are being put on him.

This somewhat passive characterization is an artistic choice, as we have seen Ganz project a more fiery and activist persona in other productions. Critics of other productions of the trilogy sometimes refer to Vanek as being stoical.

Vanek, as the playwrite Havel depicts him, is willing to martyr himself in the pursuit of liberty, but without allowing himself to become a blood soaked parody. He is, above all, civilized. You might think of him as mannered. The Audience ends as it begins, in absurdist style without resolution or relief.

The second one-act is called The Unveiling. It involves Vanek visiting the newly redecorated apartment of a married couple he used to know. They have gone whole hog into materialistic excess, collecting statues, furniture, and phonograph records, which seem to be a big deal in an impoverished communist country. The couple badger Vanek about his own life, trying to talk him into becoming like them.

The couple, Vera and Michael, are played by Sarah Rodriguez and A.J. Sclafani. As Michael, Sclafani excels at a kind of physicality informed by his studies in Shakespearian comic characters. He manages to make his character pretentious and precious while staying just this side of becoming downright irritating. That leads to the central point of The Unveiling. Michael acts out his materialistic success in a desperate attempt to veil his inner despair.

Sarah Rodriguez, as the wife Vera, is remarkably convincing for the young, newly minted actress that she is. There must be something good going on at the University of Nevada Reno, where she studied.

This, the middle of the three plays, is the most densely staged, using elements of drawing room comedy, absurdist theater, and just plain comic acting. It too uses repetitive elements, but where the brewery foreman is pathetically angry, in The Unveiling we have a Vera and Michael who are pathetically scared.

The final one-act in this trilogy is called The Protest. Once again, Havel presents a former friend of Vanek who complains bitterly of how oppressive the governmental regime has become, wants Vanek to help in a political protest, but can't bring herself to actually join the protest.

The play centers around a long monolog (delivered by Dorrie Braun as Stanek) as she argues all the pros and cons of signing the protest petition, and ultimately reveals to us that she simply lacks the courage to put her life and comfort on the line. Braun enlivens the part by repeatedly picking up a pen to sign the petition, and just as rapidly sets it down in order to deliver another speech full of sophistry and avoidance.

I have to say that these plays put demands on the audience. They are not musicals or light comedy, but absurdist tragedies. To their credit, they avoid melodrama and stick with believable characters that we see on what aren't their best days.

Back to The Underpants. Think of a recently married young couple in Germany in the year 1910. The husband is a government clerk who is, for lack of a better term, clerkish in his social attitudes. Rather than detail the plot, I'll just borrow from the Charleston Stage: "Just as the King of Prussia passes by, Louise, a Dusseldorf housewife, reaches up to wave and discovers to her horror that her underpants have fallen to her ankles. Soon Louise's madcap mishap is the talk of the town and a full fledged farce ensues."

Or, to explain more fully, Louise has been observed by others (might the king himself have seen?) and some of them have become instantly obsessed with her. They show up at her apartment under the guise of wanting to rent a room. Hilarity ensues.

A.J. Scalafani is one of the suitors, getting laughs out of the fact that he can't seem to control the physical effects of even a glance at Louise. Paris Langle plays the other suitor Cohen. Steve Martin's script makes much of the fact that this being 1910 bourgeois Europe, Cohen has to camoflage his being Jewish. "Cohen with a K," he describes himself.

Some of the best laughs of the night occur as Cohen accidentally reveals Jewish traits. Langle makes much use of her ability to contort herself into conflicted postures as she parodies a hypochondriac who is double jointed in too many places.

Sarah Rodriguez plays the comic role of yet a third suitor who sneaks into the family home through the window and makes outlandish faces and startling noises, much to the audience's delight. It must have been a fun part to play.

Perhaps the big surprise was Georgi McCauley as Louise. McCauley is another of the very young actresses (Ithaca College grad) who populate the company. As Louise, she is called upon to be the target of multiple suitors while also being wife to a husband who is something of a dud.

Each time one of the suitors makes an untimely pass at her, she shows just the right amount of fleeting distress, followed by a return to her hausfrau reserve. She doesn't seem to have much insight that she is the victim of a patriarchal society, but when her nosy neighbor (played by Dorrie Braun) tries to egg her on into having an affair with one of the suitors, Louise begins to fantasize about doing something for herself for a change. Her character arc, from timid wife to prospective adulteress (at which she fails) to somewhat liberated woman, is the meaningful core of the play.

As I have mentioned here previously, the TE San Pedro Rep company has graciously allowed me to observe, as they develop as a company and as individual performers. They have been part of a renaissance down here in the harbor area that also includes the Little Fish theatre company.

I also chanced to visit what is basically a training camp for young actors and actresses that is right around the corner from TESPR and Little Fish. It is called The Troupe, and it puts on its own performances. It was interesting to hear young voices as they did their own version of the musical version of The Secret Garden. It will be interesting to see how they develop into mature performers.