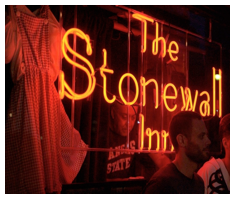 GAY LIB-On the night of June 27, 1969, police raided the Stonewall Inn, a seedy mob-controlled gay bar on Christopher Street in New York City. It was one of thousands of such raids that routinely took place in American cities and towns. But the response was anything but routine. For the first time ever, patrons fought back, setting off three days of rioting and proving the spark that ignited the modern gay rights movement. Inspired by the movements of the 60s, the moment of revolt turned into a wave of organizing.

From the days of the early Gay Liberation Front formed right after the Stonewall Riots and the offshoot Gay Activist Alliance, the “movement” has never been one movement but always a multiplicity of organizations, groups, strategies and actions. The spotlight has usually been on more privileged LGBTQI people, those with more resources, and their agendas have set most of the political priorities for queer people in the decades since. Thus it’s especially important and appropriate to stop and remember that the people who helped start it all that night in Greenwich Village were among the most marginalized members of our community: drag queens, prostitutes, homeless youth.

As we await the Supreme Court’s ruling on marriage equality, it’s important to reaffirm the urgent needs of all LGBTQI people and communities. In addition to legal recognition of our relationships, we need civil rights protection in employment and housing. We need to address the crises our youth face – bullying and homelessness, and all the mental health and substance abuse risks that come with them. Queer and especially trans people face rising hate violence, and the lethal assault on trans women of color is staggering. We also need to look beyond our own borders: the rising tide of queer rights in the U.S. has a counterpart, which is the growing exportation of homophobic agendas by U.S. conservatives to other areas of the world.

The Center for Constitutional Rights will celebrate LGBTQ Pride and march in the annual Pride March this Sunday.  We will be joined by our partners from Sexual Minorities Uganda. CCR is suing anti-gay extremist Scott Lively, one of the key figures behind the persecution of LGBTQI Ugandans, on behalf of SMUG, and we are working with LGBTQI organizations and allies in multiple countries where LGBTQI people are under attack as a result of interference by U.S.-based extremists.

Our historic case against the NYPD for its unconstitutional and racially discriminatory stop-and-frisk program also affects the rights of LGBTQI New Yorkers. While most people know that the NYPD illegally targets Black and Brown people, many don’t realize that they also target transgender and gender non-conforming people, especially people of color, and LGBTQI communities more broadly.

On Sunday, we’ll be handing out information about these two cases to the millions of people who come out to watch the march. It’s a fitting tribute to the poor and marginalized queers who fought back at the Stonewall 46 years ago. After all, it’s the anniversary of that night that the Pride March commemorates.

(Dorothee Benz is the Communications Director of the Center for Constitutional Rights. This piece was posted most recently at Common Dreams)