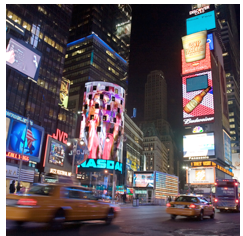 BILLBOARD WATCH-A court order shut down almost all digital billboards in Los Angeles two years ago, but a plan put forward by city officials could render that order moot and result in an untold number of the brightly-lit signs with their rapidly changing messages springing up on commercial streets throughout the city.

As proposed by the city’s Chief Legislative Analyst and the Director of Planning, billboard companies would be allowed to apply for conditional use permits for new digital billboards in exchange for removing existing conventional signs at a ratio of four to one, calculated by the square footage of sign face. The proposal was made in a report last week to the City Council’s Planning and Land Use Management (PLUM) committee.

The four to one takedown requirement might sound like a serious sacrifice for major LA billboard companies like Clear Channel, Outfront Media, and Lamar Advertising, but the industry’s own estimates of revenue from a digital billboard have ranged from six to 12 times that of a conventional billboard.

If approved by the City Council, the proposal could also raise legal questions about the city’s off-site sign ban. That 2002 ordinance prohibits new billboards or any modifications to existing ones, and was at the heart of the 2013 order by a Superior Court judge to “pull the plug” on 99 billboards illegally converted to digital by Clear Channel and CBS Outdoor (now Outfront Media) between 2007 and 2009.

In 2009, the City Planning Commission approved a revised city-wide sign ordinance that retained the off-site sign ban and the sign district exception, but in response to legal concerns it severely limited the areas of the city where sign districts could be located, and made the criteria for establishing a sign district more stringent.  That revised ordinance has been the subject of more than a dozen public hearings, but has yet to reach the City Council.

According to the June 18 report signed by Sharon Tso, chief legislative analyst, and Michael LoGrande, director of planning, billboard companies seeking a conditional use permit for digital billboards would be required to provide community benefits such as streetscape improvements, public art programs, and public service and emergency messaging, among others.

There would also be restrictions on digital billboards, such as a cap on numbers, spacing between signs, brightness limitations, and rate of message change.

A conditional use permit for digital billboards would be subject to public hearing before the City Planning Commission, an area planning commission, or a zoning administrator.

(Dennis Hathaway is the president of the Ban Billboard Blight coalition.  He can be reached at: Dennis@banbillboardblight.orgThis email address is being protected from spambots. You need JavaScript enabled to view it. )