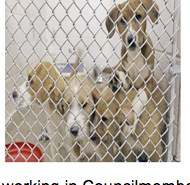 VOICES-(Re CityWatch article “LA Zoning Administrator Exceeded His Authority.”)  Yes, folks, according to Ms. Daugherty I am the root of all evil and to that all I can say is "consider the source." But it's already time to set the record straight on this issue and certain things alleged in this screed.

Daugherty attributes an e-mail on this topic to me which she cites as being from October 2013, months after I left the mayor's office and ceased to be involved in the matter, and months after Rich Llewellyn was no longer working in Councilmember Koretz's office. That's one clear error this article contains. Perhaps it is a typo, or perhaps it’s just sloppiness, but either way it’s incorrect.

A fundamental misconception is her ongoing assertion that being able to keep a few animals overnight in a pet shop in a commercial zone is somehow a major threat to public health and safety. I sincerely doubt that, but congratulations to Ms. Daugherty for finding a lawyer who convinced a judge that it is, thus keeping in place a very business- and animal-unfriendly regulation of questionable import.

This is about a public policy proposal that was intended to supplement a larger pending proposal regarding puppy mills that was going through a public vetting process. And it happens to be consistent with the reality in Glendale, Culver City and a number of other localities either close or immediately adjacent to the city of Los Angeles.

I suspect even Ms. Daugherty would acknowledge that these municipalities are not exactly examples of hell on earth just because a pet shop doesn't need to get a Conditional Use Permit to keep the dogs, cats, rabbits and what-have-you on the premises overnight in a commercial zone. But the people she’s trying to flummox at nearly every turn happen to work for LA, not for those cities, so we’d have to ask her if here's any other reason she didn’t include other cities in her lawsuit.

Daugherty doesn't mention that such pet shops, no matter where they are located, still need to get permits from the LA Animal Services Department even if they don't have to get Conditional Use Permits from the Planning Department. So conditions relating to sanitation, noise and whatever other horrors she imagines will be the result of having animals sleeping next door to, to offer just a couple of examples, a gas station or a retail shop (but not next to the same businesses located in an M-zone, where no CUP for kennels has ever been required in LA to the best of my knowledge) can be imposed and enforced via those permits.

Anybody who's ever struggled to get the City to enforce permit conditions imposed by City Planning will know that CUP conditions do not necessarily represent a "silver bullet" of superior oversight compared to those imposed by Animal Services. That’s no knock on the hard-working staffs of City Planning or Building and Safety who enforce CUPs, nor on Animal Services. They all do what they can with limited resources.

Shortly after I first broached this topic, Daugherty laughably implied on the record in a public setting that I was participating in a criminal conspiracy. Only my status as a public employee at the time prevented that very false allegation from being potentially actionable. (I wonder what she would have called it if SHE had been the one bringing the matter to the City's attention. A "public service," perhaps?) But she has since downsized the allegation to mere "sleaze," so I guess I should be thankful for small favors.

And the nonprofit entity that brought the matter to the City’s attention, and with whom Daugherty alleged I was conspiring, is now running a successful pet adoption center - with kennels - on a commercial corner in Culver City very close to the L.A. city boundary, happily paying taxes to that city instead of L.A. (and, as Ms. Daugherty might describe it, very possibly destroying everyone’s quality of life anywhere near that location). So the reality is, had Daugherty not succeeded in getting the Zoning Administrator's opinion thrown out by a judge, my "co-conspirators" would have been the only entity NOT to have benefited from it.

I’m sure that Ms. Daugherty and her very small cadre of allies will be relieved to know that my recent consulting stints in two City Councilmembers’ offices have involved very little connection to animal issues. However, I still occasionally talk to people about matters relating to animals, including responding to constituent or public inquiries, because of my long history with the City and familiarity with those issues.

Frankly, I’ll take that 25-year-plus history (and history of accomplishments) on L.A. animal - and a variety of other - issues over hers and theirs any day. And it appears I’m not alone. After all, I do keep getting invited back.