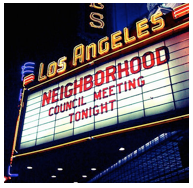 NEIGHBORHOODS LA-The Los Angeles Neighborhood Council Budget Advocates (NCBAs) started studying the City's finances immediately after they were elected, last August.  In these last eight months, the NCBAs interviewed, evaluated over 30 of the City’s Departments and made over 200 recommendations for improvements.  The fact that they found so much to recommend sounds like the City is in deep trouble but this article will intentionally accentuate the positive.

The Mayor's Budget Proposal was made public on April 20th.

CF#15-0389 which acknowledged the NCs dissatisfaction with how they are included in policy discussions and proposed that the Presiding Officers of the City Council, its committees, City commissions and boards “…exercise discretion in determining the duration of speakers’ comments…” and to “…allow official representatives of NCs or NC Alliances sufficient time to present their official views.

1.  The DONE and BONC submit a report on (their) priority recommendations, including such
concerns as NCs accepting gifts or donations, reinstatement of NC checking accounts and
the needs for more DONE staff.

2.  The CAO and CLA review (and develop) a policy where unspent NC funds may (again) be
allowed to rollover into the next fiscal year ... and NOT be reverted to the General Fund.

All three of these CFs are being studies by NC boards and Stakeholders all over the City.  They will be on the agenda of the Education and Neighborhoods Committee, Tuesday, May 5, 2015 and a big turn out of concerned NC Stakeholders is expected.

On April 28, 2015, the City Council's Budget & Finance Committee began reviewing the Mayor's Budget Proposal, department by department.  For the first time, NCBAs were present and testified
at all of their sessions.  The NCBAs were surprised and gratified to hear Rick Cole (the Mayor’s spokesperson), all five members of the B&F committee and essentially every department head speak of their efforts to inform and engage the NCs.  The committee members and GMs all pointed to their visits to NC board meetings.  It appears that the opinions and contributions of the NCs, the NCBAs and the NC Stakeholders are beginning to be recognized by all of these government officials.

Just before the B&F deliberations began, the B&F chair, Paul Krekorian introduced CF #15-0257 recognizing the NCBAs' WHITE PAPER ("A New Vision of Los Angeles ...as a... World-Class City) and describing NCBAs' work "...as an integral part of the city's budget process..."  The committee all received copies of the WHITE PAPER and the departmental recommendations and, on April 27th, they were published with CF #15-0600 (the Mayor’s Budget Proposal Council File).

CF #15-0257 goes on to instruct the CAO  to review all of the NCBAs' recommendations and to provide feedback, just as the CAO responds to other "report back" requests from the B&F committee.

No matter the outcome … the words heard sounded better than what we have ever heard, before.

(Daniel Wiseman is a long-time Neighborhood activist and an occasional contributor to CityWatch.  He has served as an NC Budget Advocate.  The views expressed here are his own.)