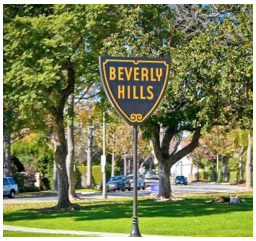 WATER WORRIES-With headlines like “Big water users like Beverly Hills, Newport hit hardest by Brown order,” Beverly Hills is being portrayed in the media, including the LA Times, as a water hog in our drought-stricken state. Beyond such headlines, this impression is only strengthened by such false information as that Beverly Hills has “no water restrictions.”

The reality is that we have in place conservation measures which are similar to those in effect in Los Angeles – whose water conservation efforts the Times praised in the very same article.  We have tiered pricing; we don’t allow hand washing of cars; we limit watering of lawns to two days per week.

But the name of our city is “Beverly Hills,” and it’s sometimes hard to go beyond the stereotype.  Despite the fact that some 60% of our residents are renters, we are indeed home to some large estates with a lot of grass and greenery.  There is a reason that Beverly Hills is known as “the Garden City.”  The beauty of our city is also most certainly one of the reasons we are able to attract tourists from around the world, who also help inject revenue into the larger Southern California economy.

But we don’t live in a bubble and in addition to the conservation measures we already have in place, we are working on a Water Master Plan which will emphasize conservation and sustainability.  We’re looking to find ways to recycle gray water and to use shallow ground water.  We’d like to continue our regional work to find ways to recycle storm water.  And, of course, we want to continue our conservation and efficiency efforts, which include encouraging the replacement of water guzzlers with drought-resistant plants (there is now much discussion of replacing lawns with Astroturf.  Personally, I believe that live, natural, drought-resistant ground coverings are by far the best option.  In general, I oppose the replacement of turf with fake grass; I also oppose the replacement of trees with fake trees).

We recognize that “we’re all in this together,” as we’ve so often heard from Sacramento.  But with the governor’s mandate for urban areas to cut back on water usage by 25%, one can really understand why LA Times columnist George Skelton asks, “Why do farmers get a free pass from Brown?”  Good question, especially considering that agricultural use accounts for 80% of the state’s overall water usage.

According to the governor, it would seem some of us are more in it together than others.

While I recognize that agriculture is an important part of our state’s fiscal well-being, the 80% water usage it accounts for corresponds to a mere 2% of the state’s overall economy.  Let’s not forget that urban areas are also important contributors to the state’s economy, and water is important to their success and livability.  However, if the governor is so concerned about urban water use, then he should take pro-active steps to rein in future development, as well.  Even with significantly reduced per capita water usage, even as we continue to develop further hydrological efficiencies, increased development will quite naturally result in an overall rise in demand for this limited resource in our parched state.

Instead of solely focusing on urban areas, the governor should be looking at an overall water conservation strategy which attempts to create a better balance, which adheres to the principles of fairness, and which will ensure that we actually are all in this together.

For starters, like the City of Beverly Hills has already done as the first city in the state, the governor should ban fracking in all of California.  Fracking represents not only a colossal waste of water, but the high pressure pumping of water and chemicals into the ground can provide no benefits whatsoever either to our environment or to our aquifers.

We in Beverly Hills are more than prepared to come together with the rest of the region and the entire state to do our part to create sustainable long-term solutions to the challenges that our climate presents us with.  After all, our city is built upon the site of the old Rancho Rodeo de las Aguas, the ranch of the “coming together of the waters.”

But if we are all in this together, then let’s really all be in it together.

(John Mirisch is the Vice Mayor of the City of Beverly Hills and an occasional contributor to CityWatch.)