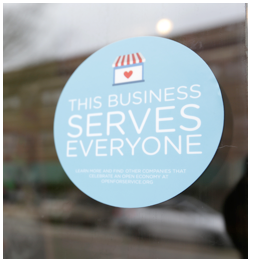 SPORTS POLITICS-As the world now knows, Indiana has become synonymous with the kinds of backward looking bigotry best remaindered in history’s trashcan. The state’s Governor Mike Pence has signed legislation under the guise of “religious freedom” that gives businesses the right to not serve someone if they believe them to be part of the LGBT community.

The looseness of this law is frightening. Could a pharmacist refuse someone their HIV medication if they assumed they must have gotten the virus through gay relations? Could the owner of a restaurant, with a wink to his buddies, deny service to anyone with brown or black skin and just say, “You look gay to me”?

And what happens to a gay couple that sits at—gee, I don’t know—a lunch counter and is denied service? Will they be dragged away?

At present there is an HIV outbreak in Southern Indiana so severe that Governor Pence has allowed needle exchanges to slow the spread of the disease. One hopes that the pharmacists and hospitals in that part of the state have a greater sense of humanity than the Indiana statehouse.

This law is outrageous. It also raises immediate questions for one of the biggest operations in the state: the NCAA. The Final Four, the NCAA’s most lucrative shining moment, is being staged in Indianapolis next weekend, just miles from their $80 million headquarters. (Immediately after the legislation’s passage, a petition online to get the NCAA to move.) Already, NCAA President Mark Emmert has issued a strongly worded statement against the legislation.

“The NCAA national office and our members are deeply committed to providing an inclusive environment for all our events,” the statement read. “We are especially concerned about how this legislation could affect our student-athletes and employees. We will work diligently to assure student-athletes competing in, and visitors attending, next week’s Men’s Final Four in Indianapolis are not impacted negatively by this bill. Moving forward, we intend to closely examine the implications of this bill and how it might affect future events as well as our workforce.”

This has received fulsome praise from many in the sports world, including Yahoo Sports columnist Dan Wetzel in an article called “NCAA’s response to Indiana’s ‘Religious Freedom’ law is perfect.”

Wetzel wrote, “It’s a good and bold threat by Emmert. This is the NCAA leading for a change.” I agree with Wetzel that Emmert has correctly raised the stakes for Roger Goodell, Adam Silver and every sports commissioner that does business in Indiana to be heard. But I can’t agree that it’s perfect. Not even close.

If Emmert really wanted to make a statement, he’d move next week’s Final Four out of Indianapolis.

Emmert could announce that they were moving the basketball semifinals and finals to Cincinnati, less than 100 miles from the locale, so anyone who had their plane tickets or driving plans set wouldn’t be egregiously inconvenienced.

Play it at the University of Cincinnati—hell, play it at a Cincy YMCA—but just get it out of the clutches of Mike Pence.

The economic cost to Indiana would be severe; hurting the hotel services industry as well as hundreds of low-wage workers. That’s deeply regrettable, but it also wouldn’t be the fault of the NCAA. It would be at the feet of lawmakers for passing such a discriminatory law.

In other words, Charles Barkley, who has been wrong about so much in recent months, is absolutely dead-on when he said, “Discrimination in any form is unacceptable to me. As long as anti-gay legislation exists in any state, I strongly believe big events such as the Final Four and Super Bowl should not be held in those states’ cities.”

The only block to this happening by next weekend is that the NCAA gets over 90 percent of its annual operating budget from the Final Four and would lose millions of dollars. But Mark Emmert, even with his multimillion-dollar salary, always likes to talk about the NCAA’s “mission” as a nonprofit is to be a force for education.

It’s why he says players can’t be sullied with payment, even as their jerseys are sold and the games are plastered with more commercials than a Daytona 500 race car. Here is a time to actually show it.

Here is a time to say that despite the branding, the swooshes and the ads everywhere, money is really not the most important part of college athletics. Here is a time, for once, to not be a symbol of incompetence, hypocrisy or exploitation but something that truly matters.

If Emmert really believes, as implied in his statement, that this legislation actually makes Indiana unsafe for student-athletes and employees, then he has a responsibility to move the Final Four.

For Emmert to make such a move would be a show of actual principle and courage from an organization that has for too long lacked either.

(Dave Zirin is the author of Welcome to the Terrordome: the Pain Politics and Promise of Sports (Haymarket) and the newly published A People's History of Sports in the United States (The New Press) and his writing has appeared in the Los Angeles Times, Sports Illustrated.com, New York Newsday and The Progressive. He is the host of XM Radio's Edge of Sports Radio. This piece was posted first at edgeofsports.com)