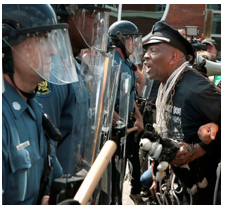 SPECIAL REPORT TO CITYWATCH-On Sunday, St. Louis Prosecuting Attorney Robert McCullough announced the arrest of Jeffrey Williams. Williams is charged with 2 counts of assault in the first degree, firing a weapon from a vehicle, a class D felony, and three counts of armed criminal action after he admitted to the shootings. Police found the weapon he used to shoot two police officers- one in the face, the other in the shoulder. Williams is being held in lieu of $300,000 cash bond.  Neither officer was employed by the City of Ferguson.

McCullough said the investigation was ongoing and attributed the public’s participation for leading authorities to Williams.

Holder dispelled the false notion of  “Hands Up- Don’t Shoot,” on March 11 when he said  “This morning, the Justice Department announced the conclusion of our investigation and released a comprehensive, 87-page report documenting our findings and conclusions that the facts do not support the filing of criminal charges against Officer Darren Wilson in this case.  Michael Brown’s death, though a tragedy, did not involve prosecutable conduct on the part of Officer Wilson.”

Yet, even before the St. Louis County Grand Jury could conclude an investigation, the “Reverend” Al Sharpton, Holders friend, along with the “Reverend” Jesse Jackson and several outside organizations were inciting tensions in Ferguson with racially charged words towards Wilson. Michael Brown’s stepfather, Louis Head, made national news with his “Let’s burn this bitch down” call to action the night several businesses were intentionally torched and destroyed.

In November, McCullough’s Grand Jury came to the same conclusion as Holder but Sharpton continued his hateful rhetoric denouncing the grand jury for “discrediting” Michael Brown and conducting a “flawed” investigation.

Officer Darren Wilson, a decorated six-year police officer became “headline news” and was tried, convicted and “hung” by media outlets and politicians across the country. The New York Times published his home address, putting another city miles away from Ferguson on high alert. Wilson was forced to resign from his job and move from his home. His family will always have to “look over their shoulders” as they attempt to rebuild their lives.

While the second DOJ report damned Ferguson police supervisors and leadership for racial disparities in arrests, bigotry and profit driven law enforcement, a New York Times article showed the City of Ferguson as having the lowest incidence of racial disparity within St. Louis County.

Before the dust settled, 2 police officers resigned and the Court Clerk fired over racist emails. Since the report was made public, the City’s Municipal Judge, the Chief of Police and the City Manager have all resigned. These are the people who run the operations in Ferguson.

The DOJ has threatened lawsuits and other actions, including the dismantling of the Police Dept. if Ferguson did not end its discriminatory practices.

Barely a day after Holder announced the DOJ findings of both reports, Michael Brown’s family announced the filing of a “wrongful death” lawsuit against Wilson and the Ferguson Police Dept.

Anthony D. Gray, attorney for the Brown Family had this to say, "We feel and we've always felt from the very beginning that Officer Darren Wilson did not have to shoot and kill Mike Brown in broad daylight in the manner that he did. There were other options available to him and that he chose deadly force as his option, and we plan to demonstrate in a court of law to reasonable minded people that the choice to use to use deadly force was unreasonable.”

Most people, including the St. Louis County Prosecutor and the DOJ believe that Wilson was justifiable in using deadly force to protect himself so it is confusing how Brown’s death could have been “wrongful,” given that Brown charged the officer after trying to take the his gun away.

Gray, whose high visibility in Ferguson has masked his own alleged racial disparities in the neighboring City of Pine Lawn. Local CBS affiliate, KMOV reported January 30 that “before becoming Pine Lawn's equivalent of a police chief, Gray was the city prosecutor, a critical role in the town’s approach to collecting massive amounts of money through its municipal court.  He has now resumed his role as the town’s prosecutor. In 2013 and 2014, Pine Lawn collected $3.5 million in court fines and fees, which accounted for almost half the city's general revenue.”

Gray is just one of many who are quick to assign blame that is newsworthy rather than aid in a process to end racial unrest in all communities.

Ferguson Mayor James Knowles said he has made many efforts to attract more minority police officers but that Ferguson cannot compete with salaries and opportunities offered by larger departments in the area.

Knowles expressed surprise at much of the DOJ report, as he and the City Council are part-time officials who rely on staff to carry out day-to-day operations within the City and do not monitor everything on a daily basis.

On Friday, five residents signed an affidavit at City Hall petitioning a recall of the Mayor. The release said that residents delivered letters to the mayor and city council decrying “We cannot describe how disgusted we are with you!” Organizers must collect signatures of 15% of those who voted in the 2014 mayoral election within 60 days in order to force a “special election.” The concept of how Third Class cities, like Ferguson, operate escapes most people and the unwitting “figure head” is often the target of angst and reprisal.

Most municipalities in St. Louis County elect City Council members who make little more than $500 per month and who have “0” experience in dealing with the kind of rioting that has plagued Ferguson for months.

While news reports are quick to point out that the mayor and city council are white, they fail to point out the lack of minority candidates filing for office in previous years and the lack of voters who actually turn out to vote.

Organizations from other areas with varying agendas continue to protest in Ferguson making it nearly impossible to begin rebuilding a real community. Residents and business owners are wary because they feel that the continuing chaos hinders reforms within their City.

Four black candidates have challenged white incumbents in Ferguson for city council seats. If more than the usual 11% of residents go to the polls in April, there can be a “real first step” for distrusting residents in the City to begin a unified healing process of the problems that began over two decades ago.

(Katharine Russ is an investigative reporter and a regular contributor to CityWatch. Katharine Russ can be reached at [email protected].