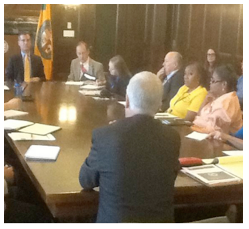 VOICES-Over the last 10 years, I have seen and been part of a number of important Neighborhood Council (NC) events:

On Monday, March 2, 2015, I was present when the NCBAs met with Mayor Garcetti to present their current White Paper to him and discuss their concerns for the financial state, practices and future of our City.  What makes this event comparable to the ones above is that, for the first time, we have a mayor who convincingly displays his interest in hearing the NCBAs and working with them as he prepares his Budget Proposal.

The meeting began with a detailed review of the City’s financial condition and the Mayor’s visions by Rick Cole (Deputy Mayor for Budget & Innovation).  He said that:

The Mayor’s priorities are:

(The Mayor has decreased the number of Deputy Mayors from 12-15 to just these four areas.)

Mayor Eric Garcetti heard the NCBAs as they introduced themselves … but he knew most of them already.

He opened by presenting his knowledge and positions on many issues:

He told us that, as a City Council Member, he greatly enjoyed regular discussions with the previous mayors where he could voice his concerns about the Budget and other issues.  Mayor Garcetti continues that activity with the current City Council Members.  He was pleased to learn that this years’ NCBAs have already met with the all 15 City Council Members, too, and he offered to share his experiences with us.

The Mayor and NCBAs then turned to the items in the White Paper.  This year the NCBAs focus parallels the Mayor’s priorities and includes:

The interchange which followed included many specific concerns voiced by the NCBAs and heard by the Mayor.

The challenges are huge but this Mayor talks about it openly and frequently.  He and our new City Controller are making it possible for all of us to be much better informed stakeholders with the greater access to data and greater access to our government officials as well.  That includes the Mayor’s weekly radio programs, his visits to City employees and neighborhoods and his blog.  That includes the Controllers’ data website which displays almost overwhelming amounts but certainly much more complete data about the Citys’ finances than we ever had before.

In street talk, Eric Garcetti, as Mayor, did a good job of “…talking the talk…”  He has already created more transparency in government than any previous City mayor.  The ability to do that is a sign of our new social media and the increasingly-electronic age.  He, more than any previous mayor, seems willing to work with the NCBAs to “walk the walk…”   This years’ NCBAs have expressed their wish to work with the Mayor and City Council for the modernization and success of our City.

That job is just begun for this years’ Budget Proposal.

(Daniel Wiseman is a long-time Neighborhood activist and an occasional contributor to CityWatch.  He has served as an NC Budget Advocate.  The views expressed here are his own.)