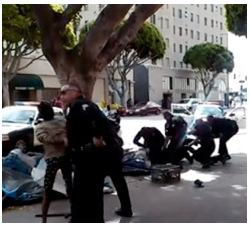 ● Harsher penalties for individuals who sell scheduled narcotics within 500 feet of a drug or alcohol rehabilitation center (shelters, centers and hotels designed for rehabilitation). Narcotics sales are no longer considered a serious crime under the new realignment laws (AB109).

The penalty for these suggested enhancements must be enforced.  We are seeking a mandatory minimum of six months in jail for said individuals (actual jail time).  Currently the criminals we arrest, are not in custody long enough to protect the recovery community from their activity. We are also requesting mandatory stay away orders for these offenders from the Skid Row recovery zones.

Selling narcotics near a recovery program must be amended to be a serious crime.  If we look at the rap sheets of many of the individuals we have repeatedly arrested over the years, it is clear that we as a Department have not failed the community.

It is our justice system that is failing them in its refusal to take a realistic look at the challenges the people of Skid Row.

We also must ensure that the courts more closely scrutinizes the defendants in sales cases, as it relates to referring them to drug programs in the Skid Row area.  It simply gives them an excuse to remain in the Skid Row area and continue in their crimes under the guise of recovery.

● We need a bolstered and more proactive Bureau Streets Services.  The overwhelming concentration of bulk items in Skid Row is a clear contributor to the health issues and diminished level of safety to the Skid Row community. The scarce response of BSS, only helps to give the criminal element a stronger foothold in the area. A focused and consistent response is necessary to improve the quality of life, and reduce hiding places for the criminal element.

● Focus on decentralization of services to the homeless.  The current state of skid row being the Mecca for all things homeless County-wide has failed the recovery community.  Skid Row, in its current state, is not conducive to recovery for the majority of those truly seeking to obtain and sustain sobriety, due to the overwhelming temptation to fail due to the high concentration of criminality.

More homeless shelters and low income supportive housing services in other areas of the city will remove some of the burden from the Skid Row area and provide a safer, less congested location to recover in for those who remain, as well as for those who would utilize the services away from Skid Row.

● Restoration of the outreach component of the Safer Cities Initiative.  We need assigned service providers within Central Station to be able to provide alternatives to jail for many of our arrestees whose addictions, or mental illness drive them to engage in certain non-serious crimes.

This component should not be run by the Department, but as more of a partnership between the officers who arrest these individuals, and the service providers to connect non-serious offenders with mental illness to services on the front end of the arrest process.

As it relates to serious violent offenses, these advocates should be allowed to make recommendations to the District Attorney to seek long term confinement and assistance to the serious violent offenders who suffer from mental illness.  These would be attached to the police reports of the arresting officers for the DA to review.

The Public Defender’s Office should also be brought into the fold to ensure the entire criminal justice process is involved in the rehabilitation of violent mentally ill offenders.  With these cases, we are not seeking for the District Attorney’s to make deals with the Public Defender for the purpose of a quick disposition of the cases.  We are seeking sentencing with involuntary care in mind for these cases.