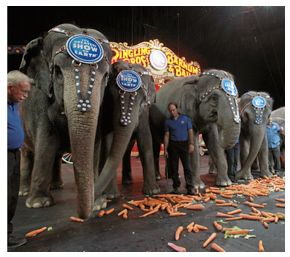 ANIMAL RIGHTS POLITICS-The Ringling Bros. and Barnum & Bailey Circus announced Thursday that it will phase out the use of elephants in its circuses. Why? Because it knew that if it didn't do the "right" thing, it would be the end of its business.

"There's been somewhat of a mood shift among our consumers. A lot of people aren't comfortable with us touring with our elephants," the company told the AP. Well, that's an understatement. Around the world, people are saying no to wild animals in circuses, and city after city is passing anti-bullhook ordinances as a way of keeping elephant circus acts out.

The people have spoken — and good for Ringling Bros. for listening. It's a great first step in the right direction. I'm sure at some point in the future, Ringling Bros. will no longer have other exotic animals in its circuses either.

In a sentence: Ringling Bros. will survive because it listened to the consumer.

The Ringling Bros. announcement must be a huge wake-up call for SeaWorld. Business as usual for SeaWorld will lead to a bankrupt company. What we have here are two companies dealing with almost identical issues in completely opposite ways.

The SeaWorld brand is broken. Wall Street, advertisers, consumers — they have all turned their backs on the business. SeaWorld management has become an example of how not to run a company. With today's announcement, Ringling Bros. has proven that it's thinking about the future.

SeaWorld, on the other hand, is stuck in the past, clinging to an antiquated, cruel business model.

All it took for Ringling Bros. to make the right move was listening to the consumer, common sense and knowing right from wrong. Your move, SeaWorld.

(Kenneth Lerer is a Managing Partner at Lerer Ventures, which incubated and is an investor in The Dodo. We encourage all readers of The Dodo to comment on articles.  This commentary was posted most recently at huffingtonpost.com)