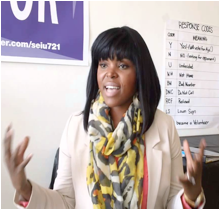 TURNING COMPTON AROUND-When Time Magazine profiled Compton, California Mayor Aja Brown in July of 2014, parallels were drawn between the recent economic renaissance of Brooklyn and the potential for Compton -- yes, the one you know from hip hop music fame -- to follow a similar path.

But, noting that "gentrification" can bring its own challenges, the magazine cautioned that "...mayors from around the country want their cities to be more like Brooklyn -- but they also don't."

In some circles, that cautionary ambition has come to be known as "Beyond Brooklyn" -- loosely defined as a municipal alchemy involving social and financial capital, leadership and educational reform. But with an eye not only toward "new," but also toward existing residents.

Born in 1982 and raised by a single mother in Altadena, an unincorporated community just north of Pasadena in Los Angeles County, she has become a center of Compton politics and has been mayor since 2013. Her immediate challenges included the state's recession-fueled budget decision to close a high-profile facility, Kenyon Courthouse, that had a strong role among Compton's younger population.

Amid dire predictions of violence in the streets, the mayor acknowledged the negative impact but suggested it will be lessened because the city offered other programs of support.

"We must invest in our youth to turn our city around," she said, adding that more than 30,000 residents under the age of 18 live in Compton, a city of about 100,000, and "... making certain they have safe parks to play in, after school programs to boost exposure and activities to expand opportunity are all at the top of my priority list."

Mayor Brown also explained that she believes early access to education and role models can greatly affect the course of a young person's destiny. While California's budget judicial cuts have certainly exacerbated this issue, the mayor is optimistic that Proposition 47 will minimize the negative impact of decreased judicial appropriations.

It is projected to assist over 10,000 people and offers many the second chances that the mayor supports.

"Far too often, we write off members of our community that many times make difficult choices to provide for their families. Prop 47 gives those members a second chance at redemption and diverts funding to where it is needed most; in our communities and not in our prisons."

The city's participation in programs such as "My Brother's Keeper" hopes to cement the mayor's reputation as an advocate for youth development. Ever since taking office in 2013 the mayor has made youth mentoring programs a cornerstone of her administration.

According to Brown, the program is tasked with "helping young people read beyond expectations of grade level, improves access to jobs, and reduces violence in the community."

The mayor remains cautious when it comes to taking a position on charter schools, a big issue in Southern California, but she has a valid argument for her position. While they have proven to be a model for success in many cities, Brown points out that there have been "both successes and failures" within her community. While many see charter schools as paramount to achieving any type meaningful school reform, the mayor has a different criterion for measuring school reform success: high school graduation rates, literacy rates, and youth employment are more tangible signs of progress.

"Measuring student success merely through standardized test scores does not provide a realistic indication of that student's propensity to be successful outside of the classroom," said Brown. "We have to be creative in exposing our students to applicable trades, alternative employment opportunities and entrepreneurship at an early age to be sure our graduating seniors have a plan and the skills needed to support themselves and their families."

The mayor took a lighthearted turn when we discussed the historical and cultural icon Maxie Filer, a.k.a. "Mr. Compton" and one of the community's civic icons.

Filer was a longtime advocate of the civil rights movement and is famously known for passing the bar 25 years after graduating from law school. According to Brown "Filer was a pillar of activism, integrity, and vision" and an example of how far determination and perseverance alone can get one in life.

Vision, perseverance and activism? Aja Brown is already being referred to as the "Obama of Compton," but maybe she's leading Compton into the kind of "Beyond Brooklyn" city that will put her on the national stage.