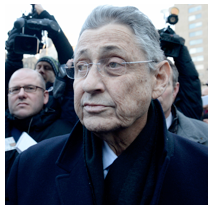 From the Speaker Silver scandal, welcome the term "bribery pawns" into our lexicon family, because it's abundantly clear that cancer victims at the center of all this were kept in the dark.

While anyone following Speaker Silver's case can connect the dots as they see fit, Bloomberg's Businessweek correctly noted that "... the New York case will play out in a larger context of dark allegations. Only two days before Silver's arrest, a series of private federal racketeering lawsuits against four other plaintiffs' law firms were made public in North Carolina."

Those lawsuits were a related reference to the case of gasket maker Garlock Sealing Technologies, where a judge last year ruled that past settlements were "infected by the manipulation of exposure evidence by plaintiffs and their lawyers." An NPR story said the case "sheds light on the murky world of asbestos litigation."

From the victims' point of view, the connections between Garlock and the Silver case are clear. Most importantly, nobody is alleging they did anything wrong and victims actually largely incidental to the process. At least in North Carolina, it seems victims might be pulled into the scandal for doing what their lawyers told them to do.

I've called the North Carolina victims "perjury pawns" in the past, and it is discouraging to see that the New York scheme also seems to have kept victims uninformed, certainly not knowing that their cases were being "referred" to generate millions in potentially illegal payments. Both cases make an argument for new laws that protect victims who wade into this litigation with little legal experience.

The New York allegations are that Speaker Silver, employed by the personal-injury law firm Weitz & Luxenberg P.C. was paid more than $3 million for referrals of people suffering from mesothelioma, a deadly form of lung cancer caused by asbestos exposure. The Wall Street Journal's Ashby Jones notes that "... those patients were referred by a New York doctor to whom prosecutors say Mr. Silver steered $500,000 in state funds for a research center, according to the 35-page criminal complaint."

We can surmise that many families would have been surprised to discover that the expenses, which they pay from any settlements they receive, including paying a doctor $1,750 per hour, plus another $7,500 per day when testimony required overnight travel.

Jones' story also notes that "... mesothelioma cases have been on the wane for some time, as the use of asbestos fibers has decreased. Between 1992 and 2009, the incidence of mesothelioma in the U.S. fell 22%, from 1.23 cases per 100,000 to 0.96, according to the National Cancer Institute. About 3,000 new cases of mesothelioma arise each year. But the cases are still in high demand by plaintiffs' firms, partly because the cancer is so closely related to asbestos exposure, and because damages for a single victim can often run into eight figures."

One of the most troubling dot-connecting reports is from The New York Post which, in its traditional understated style, reports that "... Sheldon Silver has perverted the courts as well as the Capitol. His law firm, Weitz & Luxenberg, gets its asbestos cases -- and paydays -- moved more quickly than those of other attorneys, and reaps a fortune from favorable rulings by friendly judges, charge lawyers and tort-reform advocates."

"Last year," reports the Post, "at Weitz & Luxenberg's request, Heitler reversed a 20-year rule barring punitive damages in asbestos cases, paving the way for much bigger jury awards and putting pressure on defendants to settle. Another judge, Joan Madden, consolidated unrelated asbestos cases. Joining up to seven plaintiffs has resulted in huge increases in NYCAL jury verdicts -- from an average of $7 million to $24 million per plaintiff between 2010 and 2014, data collected by Bates White Economic Consulting show."

These reports are shaking up the usually insular world of asbestos litigation. News organizations are suddenly interested, and this is bound to get uglier.

What already seems clear is that transparency is a key to all this. If victims are being referred by a physician via some attorney they never speak with, and from there to yet another firm, they should know what's going on. If that process removed millions of dollars from victim compensation, then the families paying those fees should know.

Asbestos victims have suffered enough. They do not deserve to become pawns, even with billions of dollars at stake for plaintiff firms and their political allies.