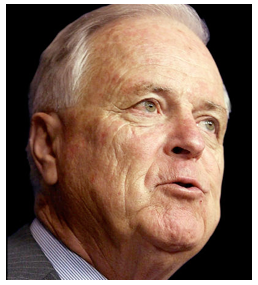 DAILY NEWS-As an investor, former Mayor Richard Riordan said he’d put money on Mayor Eric Garcetti going far in politics. When it comes to the the immediate future, though, he’s not so sure.

“I think Mayor Garcetti is brilliant,” Riordan said in an interview on “The Hot Seat with Max Schwartz” podcast on Neon Tommy, the news outlet of USC’s Annenberg School for Communication and Journalism. “He is very articulate, and I think he will go on to bigger things like senator or maybe president someday. But I don’t think he has been a good mayor — I think he has a lot to learn.”

Riordan, who is out promoting his autobiography “The Mayor,” said Garcetti has “surrounded himself with ... weak people and doesn’t get things done. I’m betting on him in the long run, but he’s weak in the short run.”

The former mayor also had some less than kind words for the City Council, saying it has allowed gentrification to occur throughout the city without considering the impact on housing for the working poor.

“I like each of the council members one on one, and some are brilliant,” Riordan said. “But the City Council is controlled by the unions that make it hard to get things done.

“No matter where they stand, it’s difficult for them to go against the unions and what they want.”

As Mayor Garcetti continues his trip through Asia, he has proven himself nimble at communicating via social media.

Aides traveling with him were able to forward photos and messages to Los Angeles-based staff members, and they posted the items. Where there’s a will...

NEIGHBORHOOD COUNCILS-LA’s elected officials have had a love-hate relationship with the neighborhood council system ever since it was formed, with many officials believing they know best what is needed in their districts.

While some of these critics publicly praise the involvement of residents on the councils, they’d prefer to see them working on issues such as community cleanups and steering clear of actual policy discussions.

One result has been a dramatic reduction in staffing allocated to the Department of Neighborhood Empowerment.

The City Council is considering a plan to bring in 50 temporary workers beyond the 150 now authorized, as they don’t have to go through Civil Service procedures to be hired.

The mayor’s office already has plans for those jobs, but several City Council members want to hold on to some of the positions.

DONE officials argue it needs the additional staff to oversee the 95 neighborhood councils and do its advance work for the mayor, City Council and myriad departments.

(Rick Orlov covers City Hall for the dailynews.com. where this column first appeared. His Tipoff column appears Mondays. For a daily political fix, go to the Sausage Factory at insidesocal.com/politics. You can contact him at  rick.orlov@dailynews.com ) –cw