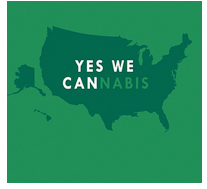 ELECTION POSTSCRIPT-Want to know the real winner of the 2014 mid-term elections? Weed!

The nation’s capital will soon have fun-filled “flower” fests in its lovely parks. Gardens will be green with the grasshopper with no legs. Kitchens will be filled the seductive smell of “space brownies.”

Indeed, all this ganja giddiness may just create some goodwill among that incoming Republican majority up on Capitol Hill. Bring the party up to the Senate Swamp! It shouldn’t be hard to lure the new majority outside for a little afternoon blunt blazing.

Once the new Republican majority takes a few healthy hits of good old-fashioned pot, my guess is they will grasp the harshness of denying nutrition assistance to the one in five children who are hungry in the United States.

When those uptight dudes indulge in a little Sweet Lucy, I’m certain they’ll see that they’ve been downright cruel denying a raise to millions of our country’s working families struggling to make ends meet on a minimum wage that’s far too low.

A high GOP just might become introspective enough to realize that Americans are fed up with corrupt Wall Street banks, tax loopholes for greedy corporations, and a shredded safety net for our neighbors in need. Pot just could be the remedy that the country has been waiting for.

It’s really possible that when weed wins, the country wins. A stoned governing majority may be just the ticket the 2014 electorate was bargaining for. And, if not — well, come on down to the District of Columbia and get high with the rest of us.

We’ll keep fighting — even harder — to keep the gains we’ve won and to continue the inevitable march forward. And now, it will feel a bit easier.

(Among other things, Karen Dolan is the Institute for Policy Studies’ deadline poet. This perspective was provided CityWatch by OtherWords.org)