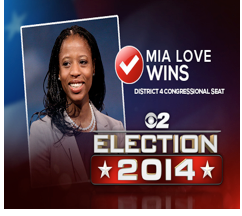 SOULVINE UNCHAINED --- Despite the fact that last week’s election was a bummer for the Democrats throughout the country, the outcome did provide some important and monumental results of which the best is the fact that California remains a blue state. Lead by Jerry Brown’s historic victory to a fourth term as governor, Democrats won all the races for constitutional offices, thus securing control of the state of California. So, it is in the best interests of California’s powerless Republicans to move to Utah.

But wait. Utah made history last week: It elected Mia Love, a black female Mormon, to Congress, making her the first black female Republican member of Congress. This is ironic in view of the fact that, across the nation, black people voted last week in numbers and percentages unseen since the “good ole days.” An Emory University study released today states: “The Republican party still struggles to connect with black voters, but it was the white voters who were predicted to vote for Democrats but didn’t that gave Republicans the extra push they needed to dominate the midterm elections.”

And here, locally, I got my Supervisor Sheila Kuehl; my congressman, Brad Sherman; my assemblyman, Matt Dabenah; and my state senator, the wonderful Bob Hertzberg. I’m a happy voter.

I don’t even want to talk about Los Angeles County’s Assembly Districts 62 and 64, other than to provide this statement from losing candidate Prophet Walker, who was the victim of the worst campaign smearing in history: “I ran because I believe every young person deserves the opportunity for redemption.

“I want everyone in Sacramento to hear that message, and more importantly, I want every young person to believe that. So while I’m disappointed by the results of the election, I am proud to have delivered that message and I will continue to do so no matter what I do next. I am very grateful to those who had the courage to stand with me. I will now begin the process of helping our community heal as well as my family.”

I have one more thing to say: Walker is a fine young man with a very bright future and all he has to do is keep doing what he’s doing and he will prevail. As to the residents of ADs 62 and 64: Don’t come crying to me when things go awry in their communities. The first thing I’m going to ask you is, “who did you vote for?”

SPEAKING OF GOING AWRY ---  The residents near Compton’s Magic Johnson Park are in a huge uproar over their supervisor, Mark Ridley Thomas’ plans to create an equestrian center for horses in their neighborhood.

The residents are mad as hell and are fighting the county and Ridley-Thomas over this issue. The residents (none of whom own horses) say they don’t want other people boarding and riding horses near their homes. They say the park doesn’t need an equestrian center for horses, but rather a swimming pool for their children. This is a big fight and it’s going to get nasty.

Go wherever you have to and pick up a copy of the Nov. 10 Compton Herald and read Jarrette Fellows’ front page story on this big mess.

Also in this week’s Compton Herald is my story on the sentencing of former Sen. Rod Wright and the outrageous attacks on him by Judge Kathleen Kennedy. Get it and read it and you won’t believe your eyes.

This woman made me so mad that when I went to the polls, I voted “no” to every judge on the ballot. Not only did Judge Kennedy attack Wright, she attacked all politicians!!

(Betty Pleasant, a longtime LA observer, columnist and urban voice, writes Soulvine and is a contributor to CityWatch.)