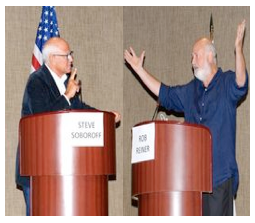 REVIEW: THE ROB REINER-STEVE SOBOROFF SHOW-It was the NIMBYs vs. the Devstos and Denzos on Sunday night in Malibu. A battle for the ages, defining the soul of California's most famous beachfront town. (For the acronymically challenged, NIMBY stands for "not in my backyard," while Devsto is short for "developer stooge" and Denzo for "density zombie").

Malibu may be some 20 miles from Beverly Hills, but it was with more than a bit of interest with which I watched Sunday's debate on Malibu's Measure R, the slow-growth initiative on next week's ballot.

Yes, there are some Beverly Hills connections, including through the representatives of the pro- and anti- measure R sides, Rob Reiner and Steve Soboroff, respectively. Rob Reiner is a Norman, a graduate of Beverly Hills High School, and his incomparable father, Carl, still lives in Beverly Hills.

Steve Soboroff's mother used to own the venerable linen store, Shaxted, on Camden Dr. And there are more than a few Beverly Hills residents who are lucky enough to have second homes in Malibu, including my parents. While I myself am Beverly Hills born and bred, and still active in the BH community, I did spend a year living in Malibu growing up. But that was so long ago that Malibu hadn't even been incorporated as a city.

Now Malibu's residents have a chance to decide for themselves, and the irony of Sunday's debate was that neither Soboroff nor Reiner can vote in the election, since both are residents of Los Angeles. Both have ties to Malibu, with Reiner having had a second house in Malibu for decades, and Soboroff owning property in Malibu on which he wants to develop a complex which would be anchored by a Whole Foods.

While the debate itself got heated at times, with Reiner making no attempt to hide his passion and Soboroff casting barbs back, the contrasting messages could be encapsulated as follows:

Reiner: A "Yes" vote on Measure R allows Malibu residents to decide on the kind of growth they want.
Soboroff: Measure R would do the right thing in the wrong way.

Actually, that would mean that Soboroff, who in addition to being a former Vice Chairman of the Dodgers in the McCourt days, was also the developer of Playa Vista, agrees that development in Malibu should be limited to reflect the needs and desires of the residents of Malibu. Not always the point of view one might come to expect from a developer in this day and age.

Soboroff's argument was that the current process, in which a developer is subject to the scrutiny of the city staff, planning commission and, ultimately, City Council, currently safeguards against overdevelopment. This is the "screening process" Soboroff mentioned during the debate.

At one point, Soboroff, who repeatedly criticized Reiner for having spent $400k on political advisors and consultants in connection with the Measure R campaign, suggested that Reiner shouldn't attempt to circumvent the process. His phrasing didn't mince words; he told Reiner not to "bully your way around it." He then went on to suggest that Reiner should run for office.

As a former mayoral candidate, Soboroff himself has run for office in LA, but Reiner, of course, can't run for office in Malibu, unless he changes his residency. Yet Soboroff's message was subtly suggesting that the System works and that we should "trust our elected officials."

More than five years ago, I actually took similar advice to what Soboroff was dispensing this past Sunday and did run for office in my hometown of Beverly Hills. After having spent years living abroad, I was alarmed to see the bad decisions and overdevelopment that was causing the very special charm of my town to be eroded in a very distressing fashion. I saw that the System was indeed working -- if you were a developer. But the System was failing the residents, for whom community character still meant something.

Five years down the line, while I hope that I and my colleagues have made a difference and am proud that we adopted a General Plan which intends to preserve our unique community character and the delicate mix which defines our city, I am also chastened by the fact that we simply do not have a level playing field when it comes to residents and developers -- not in Beverly Hills, not in Malibu, not in any city in the region.

But even outside of LA itself, which is notorious for being a latter-day "pay to play" version of Chinatown, it is almost impossible for normal residents in other cities to protect their communities when faced with the resources of developers intent upon maximizing profits -- community character or quality of life be damned.

It's simple. Just like with Citizens United, just like Meja Beckman told us over 15 years ago, it's all 'bout the money.

Perhaps the greatest irony of the Measure R debate was Soboroff's attempt to paint himself as a "man of the people." He kept throwing up the amount of money Reiner had raised while trying to contrast "classes and masses." In Soboroff's world, the developers represented the "masses" while the residents took the role of the "classes."

Though portraying developers as "the little guy" might seem to be an inverse stereotype, Soboroff said at the debate that he doesn't like stereotypes. Unfortunately, he inaccurately tried to create the impression that the stereotyping of developers is just as objectionable as ethnic stereotypes, something that may be a neat debating trick, but as a notion is patently ridiculous. From my own experience at City Hall, I'd say that developers seem to be a lot like cholesterol: there's the good kind and the bad kind. Like with cholesterol, though, the bad kind seems prevalent, sometimes despite our best efforts.

Let's face it: the truth is that for developers who have a vested financial interest in maximizing their profits, bigger is almost inevitably and always better. What do most developers want? "More," as Eddie G. Robinson famously said in "Key Largo." And often such developers are prepared to spend fistfuls of dough on expensive land use lawyers and high powered lobbyists to get what they want.

Trying to get "more" (or asking initially for exorbitant density so they can "bargain" themselves down to a slightly less impactful level) is a common MO for developers, and who can blame them? They are just doing what developers most often do. It really is up to the System and our elected officials to put the interests of the Public first and to protect us against bogus arguments of projects not "penciling out" and to ensure adequate public benefits for projects which are not "by right." 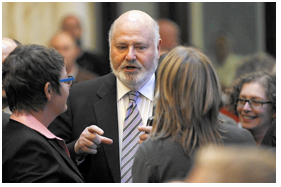 It starts with staff, and once staff gets behind a project, my experience has been that it is almost always impossible to derail a bad project. Suggestions for improvements are met with a "can't do" attitude or the standard phrase, "the project wouldn't pencil out." With this kind of full court press, it is all too easy for well-meaning council members to be co-opted or simply to give in. So while the admonition "run for office" might in theory be good advice, in practice it is difficult if not impossible to ensure that the residents' rights are being protected. You shouldn't have to, of course, but very often in practice you really can't fight City Hall. It's a bit like the House in Vegas.

Normal residents, who are involved in their own lives and businesses, can almost never compete with the moneyed interests who work within and sometimes use the System so touted by Soboroff as working. In general, the System is working to jack up FAR, to make projects as big and impactful as possible, and thereby to maximize profits. The public benefits, which staff, commissioners, and council are all supposed to insist upon are in many cases dubious or non-existent. The impacts, however, are often forever.

Another one of Soboroff's "arguments" against Measure R was a thinly veiled form of blackmail. Essentially, he said, if Measure R passes, he will sue the city of Malibu and bleed it dry, so that essential public services might be impacted. Often, oversize projects overstate the public benefits -- generally inflated tax revenue projections -- while they understate the impacts, often increased traffic. 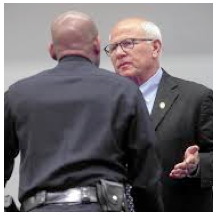 Soboroff's threat of litigation flips this on its head, with the implicit assumption that his property rights trump those of the homeowners in Malibu. It's one of those nonsensical arguments that ignores the legitimacy of zoning as a way to regulate the intricacies of living in a community together. Want to build whatever you want on your property in the middle of the desert? Fine. But your right to move your fist ends at my nose. That, essentially, is what zoning is about.

Finally, Soboroff raised the specter that the Malibu urgent care facility, as well as the movie theater, would be jeopardized by Measure R. Reiner pointed out that movie theaters and healthcare facilities would be exempted by the Measure, but Soboroff suggested that they would only have a place in any development if the developer were a "tooth fairy," i.e. if the developer subsidized these less profitable land uses. He suggested that since the passage of Measure R would "necessitate" developers' spending money on litigation, they would therefore not be able to subsidize these less lucrative uses.

The idea of a "tooth fairy" seems a bit absurd in the context of land development. Saturated fat cholesterol developers are not the tooth fairy and you would almost really have to believe in the tooth fairy to think they were. If they are going to provide public benefits, normally this would be the result of a development agreement with the city. And for that to happen, you ultimately need a city council which truly and without hesitation is willing to put residents first. In this day and age, that is a true rarity. Sadly. Unfortunately.

Measure R in Malibu attempts to change the equation and the narrative of how projects get approved. Instead of just convincing a group of sometimes jaded insiders about the merits of an application, developers of massive projects would need to make their case directly to the people whose neighborhoods would be impacted. This principle is a good one, because currently developers, with skilled lobbying and great connections at City Hall, often can completely bypass and ignore community members whose quality of life would be affected.

In fact, developers often try to write off these residents by decrying them as NIMBYs, so Rob Reiner's embracing of the term in the debate - taking it back from negativity, as it were - was refreshing. And for all the negativity with which the term is used by Denzos and Devstos, think about it for a minute...

When it comes to the NIMBYs vs. the Devstos and Denzos, Measure R could in some respects level the playing field. It's not about classes vs. masses. It really is about developer profits vs. quality of life. Measure R would give quality of life a fighting chance against the moneyed interests. In today's Southland, where the interests of the residents almost always seem to take a backseat to those of politically connected developers, that would be a very rare thing, indeed.

(John Mirisch serves on the City Council of Beverly Hills. As mayor, he created the Sunshine Task Force to work toward a more open, transparent and participatory local government. John Mirisch is an occasional contributor to CityWatch.)