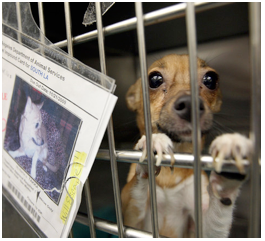 VOICES-LA Animal Services’ Animal Welfare Trust Fund (AWTF) was created to "enhance the quality of life" for its 4-legged residents by funding "animal supplies, medical equipment and improvements to our shelters" while they wait for one of two outcomes: adoption or death.  If you donated some of its current $1.7 million total, you expect the city to honor its purpose, since those things - especially food, medicine and comfort supplies - are often in short supply.

But this week, LAAS will again attempt to raid $543,847 from the fund for things that should instead come from the department's budget or through targeted donations. Little on the list would bring direct comfort or healing to our shelter animals, as the fund's stated purpose requires.

For example, LAAS wants to buy not one, but six, Segways for the purpose of trolling around your neighborhood to issue citations.  This $62,568 tab includes $49,044 for the cool rides; a $4,578 trailer in which to haul them; and $8,946 for vehicle wraps to "market" the department.  This money should instead be used to buy more than 4,200 doses of flea medicine; and that's if it is purchased at the retail price. Animals with fleas and tics look awful, feel awful, are less likely to be adopted.  It should be applied to every animal the moment they arrive.

Then there are the all-terrain toys, er, vehicles that LAAS wants to buy.  They used to have them, but virtually never used them.  Now they want four John Deere Gators, trailers for them, and a Mighty Mover at more than $116,000, and at a time when the excuse for not responding to cruelty cases is that they don't have enough money to put more officers in the field.

The shopping list (see list below) includes a $132,482 closed circuit security system; a $65,000 dispatch console and $17,325 for Bluetooth lapel microphones, all of which should be purchased through normal budgetary channels.

Or, they could load up on durable $75 Kuranda beds, more dog & cat food, surgeries and other veterinary care that the shelters cannot provide.

The list does include a few items that genuinely are needed to care for, comfort and heal the animals, including an automatic water bowl refill system for $12,764; a horse sling for $4,971 and another for other large animals for $1,727; and $1,666 worth of bowls.  There is even talk of piping in soothing music to soothe the animals in its frenetic environment for $7,290.

But the chasm in what is needed by LAAS, versus what is wanted, pertains to its heroic Small Animal Rescue Team (SMART), its specially trained Animal Control Officers whose work is well-documented in splashy videos.  But while safety gear and equipment should always be provided to them, when was the last time you saw anyone rescue a horse, dog or even a cat on a Segway, let alone six of them? According to one former Commissioner, if Animal Control Officers need Segways to get from place to place, they should either go on disability or retire.

If LAAS wants to raid the trust fund for equipment, it should be equipment that brings immediate and direct comfort to the animals. For example, its creaking and balmy fleet of animal transport trucks.  They don't have air conditioning, and several animals recently died in them due to lack of air conditioning. The vehicles also need GPS, which would be useful in responding to cruelty complaints....if only there were enough officers on staff to do that.

All of these goodies and must-haves could be paid for if only LAAS got off its duff on dog licensing revenue and enforcement of our spay/neuter laws.  In its most recently reported year, LAAS sold just 120,000 dog licenses among the 4 million person population it serves.  That means a paltry 12% of the City Hall-estimated 1 million dogs who live in the city are licensed.  By comparison, the County shelter sold more than 280,000 dog licenses in the same time period, even though it serves an area with just 3.5 million people.

The difference would bring in a minimum of $3.2 million each year, and probably a lot more than that.

Fortunately, this time, the normally rubber-stamping LAAS Commission put the brakes on the spending free-for-all.  A wealthy donor offered to pay for one of the all-terrain vehicles, but not a fleet of them, and a report was requested from the department which services the un-air conditioned trucks.

But with 3 of the 5 Commissioners having no prior humane experience, they struggle to recognize these ruses and have historically been pressured to look the other way on unfair and illogical expenditures and policies.

It is just a matter of time before these funds evaporate for other unintended purposes sold to them as acceptable, instead of re-allocating the funds to the foster program, the Special Treatment and Recovery (STAR) program and the Spay/Neuter Trust Fund, if the city insists that the funds are simply too abundant.

Controller Ron Galperin, should audit LA Animal Services from top to bottom to find out why this money is piled high but not spent when there are desperate shortages of food, medicine and surgery.  Mayor Garcetti should publicly support such an investigation into this mess, and far deeper into the department's other dubious maneuvers.

Shelter animals everywhere are voiceless victims. There is no need to pickpocket funds intended to give them a less miserable existence while their fates blow in the breeze.

(Daniel Guss, MBA, is a writer and humane advocate who lives in Sherman Oaks.)