LA WATCHDOG-Two weeks ago at an orchestrated press conference with the reflecting pool at our Department of Water and Power as a backdrop, Mayor Eric Garcetti, flanked by members of environmental community and City department heads, called on Angelenos to voluntarily reduce our use of drinking water by 20% by January 1, 2017.  This would involve watering our lawns only two days a week; replacing our lawns with native landscaping; installing low flow toilets, showerheads, and appliances; and covering our pools.

In addition to these conservation efforts, Garcetti also directed all City departments to be “water wise” by reducing their use of fresh drinking water, including Recreation and Parks, General Services, Public Works, Building and Safety, and the Bureau of Sanitation.  For example, within 90 days, Recreation and Parks, DWP, and Sanitation have been ordered to present a plan where 85% of the water used to irrigate public golf courses will be recycled.

The Mayor also wants to reduce the amount of drinking water that DWP purchases from the Metropolitan Water District by 50% by 2024, a very ambitious goal as we are now purchasing 80% of our fresh water from MWD because of the low snow pack in the Eastern Sierras and the over the top dust mitigation regulations for Owens Lake.

Garcetti is also calling for the creation of an integrated water strategy that increases our local supply of water.  This will involve increased conservation, green infrastructure, remediation of our contaminated aquifers, the replenishment of our groundwater supplies with recycled water, the direct use of recycled water (“toilet to tap”), and enhanced stormwater capture and reuse.

Unfortunately, the Mayor has not disclosed the cost and impact of these very ambitions and expensive programs.  Nor has he asked for any input from the Neighborhood Councils, homeowner associations, Ratepayers, the Ratepayers Advocate, or the taxpayers.

Rather, Garcetti is forming a Mayoral Water Cabinet consisting of nine insiders, all of whom are beholden in one way or another to the Mayor and his policies.  This cabinet will oversee the City’s water policies, including conservation, DWP water rates, the integrated water strategy, and stormwater capture and reuse.

But who is going to pay for this “water diet” and the related “water wise” programs that are being dictated by Garcetti with the enthusiastic support of the City Council? 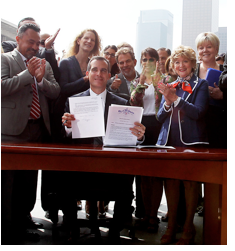 There is little doubt that the cost of the conservation plan to use recycled water (transported via “purple pipe”) to irrigate the City’s golf courses will be dumped on DWP and its Ratepayers, not Recreation and Parks, the operator of the courses.  Interestingly, there is no way that a similar deal would be available to any private country club.

The DWP will also be asking for a significant, multiyear rate increase in our water rates.  This will include a new rate restructuring plan which will disproportionately increase the burden on homeowners, especially those in the Valley, all in the name of conservation.

It also appears that DWP Ratepayers will have to foot the multibillion dollar bill for the remediation of the San Gabriel Valley aquifers, the replenishment of our groundwater supplies with recycled water, and the toilet to tap program, even though other City departments will benefit.

Over the next twenty years, the City is also looking to dump the $10 billion cost of recycling stormwater onto the Ratepayers by requiring DWP to purchase water derived from this program at prices that may approach or even exceed the prohibitive cost of desalinated water.  This will increase rates to astronomical levels.

Before Big Brother proceeds with the plan to create a Water Wise City, Mayor Garcetti, the City Council, and the Department of Water and Power need to have an open and transparent discussion with the Ratepayers and the voters about the financial impact of this phenomenally expensive integrated water program on our rates and taxes.

Otherwise, the voters’ lack of trust, confidence, and respect for City Hall will dip to new lows, jeopardizing any new taxes and related programs that require the approval of the voters.