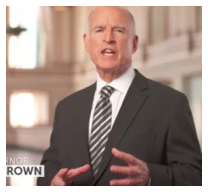 POLITICS-It appears that voter exhaustion and apathy is at an all-time high, and voter turnout is at an all-time low.  It's anyone's guess as to how the leadership will result from upcoming Sacramento election battles (with the noted exception of the governor's race, which favors Brown in a big way).

Yet the Golden State has several propositions that are critical for the state's future (which makes each vote just as critical).

This $7.545 billion bond measure is a proposition that is decades overdue, and would create more groundwater storage, watershed protection, reservoir creation and drinking water/ecosystem protection.  I've no doubt many reading this would prefer to swap the high-speed rail bonds for this, but that's not our reality at this time--despite gubernatorial challenger's Kashkari's articulation of this idea.

The perfect is the enemy of the good.  The Democratic Party was too vehemently anti-reservoir for too long, and the Republican Party did not articulate their own infrastructure plan for water.  This has BIPARTISAN legislative support and should be supported by voters who are unable to get over their addiction to clean and available drinking water (that's all of us, folks!).

This measure creates a rainy day fund that will be built into our budget, with half the revenues to repay state debts and the other half to be paid for emergencies or budget deficits.  Can Sacramento politicians be trusted with our money?  Decidedly not--but this is the first step to force the Legislature to recognize that past mistakes, and future disasters, must be paid for.

This measure places too much power, for too complicated an issue (health insurance rates), in one person's hands.  If top-down governmental health care is your idea of happiness, then this is great...but would you always be happy knowing that either a conservative or liberal were running the ship of health care all by him/herself?

There are many ways we can lower the costs of health care, and we've yet to confront them as a state--but this is all the wrong way to do it.  Dumping the vital need to make health care affordable on one person would be California's way of appointing a health-care dictator...and that is something we don't need.  This is too vital and demanding a subject to shirk our societal obligation.

Jacking up (perhaps quadrupling) the pain/suffering cap for medical malpractice lawsuits is great for lawyers and horrible for those of us watching our premiums explode in cost--again, we need to find ways to keep health care affordable.  When medical malpractice rates go up, that cost gets passed on to the rest of us.

If doctors and other health care providers prove incapable of doing their job, they should have their licenses revoked.  Yet the data shows that--tragically--most legitimate medical practice events do NOT lead to lawsuits, and the majority of lawsuits are for questionable incidents that usually are NOT due to medical malpractice.

Keeping the ability to sue and punish doctors and other health care providers is good--trying to reward bad behavior by lawyers and those presuming that doctors (who do NOT directly pay the money, but rather their insurance carriers and affiliated health plans) is not good at all.  I'm a doctor, and couldn't care less if I was drug or alcohol-tested...but this proposed rise of the pain/suffering cap is too darned high--and will HURT consumers.

If you reeeeeeally want to hold on to the narrative that the police want to imprison nonviolent drug offenders for life, that's your business--but it's not true.  The police increasingly are aware of which offenses are the right priorities needed to keep our neighborhoods safe, but they OPPOSE this measure, and so should you.

The ability to switch felonies to misdemeanors and to cut the right people slack already exists, and the Sacramento leadership (as well as county/city leadership) are under mandates to keep jails and prisons from overcrowding.  This involves making tough decisions, but blanket sweeps of "get out of jail free" for those who are staying there based on the intent of the Three Strikes Law is the wrong way to do it.

The laws for getting nonviolent offenders out of hardened prison environments have already been passed by the voters, and for good reason--yet our neighborhoods are already seeing more local crimes, with even violent crimes slowly on the uptick.  Let's not get carried away and discover an explosion of new offenses--the Three Strikes Law, like it or not, DID help California's once-explosive crime rates.  Let's not undo that.

I admit to being torn on Proposition 48 and County Measure P at this time, but after reviewing the aforementioned propositions it's fairly obvious what Californians (or at least those who still care enough to vote) should do at the ballot box:

(Ken Alpern is a Westside Village Zone Director and Board member of the Mar Vista Community Council (MVCC), previously co-chaired its Planning and Outreach Committees, and currently is Co-Chair of its MVCC Transportation/Infrastructure Committee. He is co-chair of the CD11Transportation Advisory Committee and chairs the nonprofit Transit Coalition, and can be reached at Alpern@MarVista.org. He also does regular commentary on the MarkIsler Radio Show on AM 870, and co-chairs the grassroots Friends of the Green Line at www.fogl.us. The views expressed in this article are solely those of Mr. Alpern.)