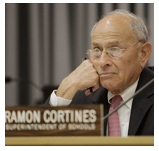 PROS AND CONS: The LA School Board struck a deal last week with Superintendant John Deasy. He has stepped down after months of missteps and acrimony.The LAUSD Board has struck yet another deal … this one with former superintendant Ramon Cortines … and he has agreed to return in a temporary capacity. All of that is being finalized as you read this. There are varying views on the wisdom of this rehiring of Mr. Cortines. What follows are at least two sides of the debate.

Ray Cortines, the Once and Future

Probably no one has flunked retirement worse than Ray Cortines.  At 82, he’s signed on to steer the Los Angeles Unified School District for the third time.

Twice before he served as an interim superintendent, and he held the post for three years immediately before John Deasy’s tenure.

The answers are straightforward: peacemaking and getting things done.

The school board and the education policy elites (maybe) are tired of toxic warfare.  Cortines has a reputation of someone who can have a constructive relationship with the teachers and administrative unions without being a doormat.  He both charmed and bludgeoned the school board, threatening to resign if they misbehaved.  (Unlike most superintendents, he had a 30-day contract, which he would periodically threaten to not renew.)

And then there is the craft and politics of getting things done.  Most politicians, and most journalists, ignore the politics of implementation.  To them, reforming schools is about getting the right law passed or achieving a favorable court decision.  But as past school reform efforts in Los Angeles illustrate, the heavy lifting starts after decisions are made, not before.

Holding the school board together, implementing an agreement with the union when some teachers balk, attracting administrative leadership: all this is part of the political kitbag of seasoned superintendents.  Cortines is one of them.

When he was preparing to retire the last time, I reflected a bit on what L.A. schools need.  Some of what I said then bears repeating:

Los Angeles needs a professional superintendent with a vision larger than his or her ego. In education reform circles, career superintendents are not in fashion right now. The media and education policy writers swoon before self-styled entrepreneurs and education czars who talk big, ignore history and count success according to how many teachers and principals they fired rather than whether students did better.  LAUSD needs someone with a belief that building an effective organization is more important than swinging a big stick or buying a fix-it program from a vendor.  It needs someone with deep craft skills, and it needs someone who understands that information technology is rapidly changing how students interact with and acquire knowledge.

But most of all, LAUSD needs someone who understands what city they’re in.  The politics of Los Angeles is not that of New York or Chicago.  Our political world is that of changing and fragile coalitions.  Chicago and New York are built on the remnants of long standing political machines and around mayors with strong powers….

Throughout his tenure, Cortines has kept a relatively low profile.  Unlike Michelle Rhee, the Washington, DC, superintendent and current [former] media darling, Cortines has not posed for a cover picture in Time.  And unlike charter school founder Steve Barr he has not been the subject of a New Yorker profile.  Like most career professionals, Cortines understood that school superintendents are much like sailboat skippers, who use the prevailing winds to take them where they want to go. The lesson for a successor is that superintendents seldom have the power to create the wind, and they never want to be the wind.

Although different in many ways, Cortines and Deasy share an appetite for work at a relentless pace.  He’s called a staff meeting on Monday, at 7:30 AM.

A word to the wise: best not be late.

(Charles Taylor Kerchner conducts the “On California” blog at EdWeek.org. He is an emeritus professor at Claremont Graduate University. This analysis was posted earlier at laschoolreport.com)

Deasy to Cortines … Frying Pan Into the Fire for LAUSD 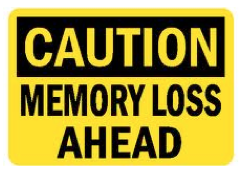 Given this latest soap episode at LAUSD, one might reasonably start to wonder if there is such a medical condition as Collective Alzheimer's Disease (CAD?), the worsening symptoms of which seem to have afflicted the LAUSD Board for a long time now. Case in point, the LAUSD Board seems to have forgotten Ramon Cortines' own recent rather colorful departure under fire from LAUSD and an equally morally challenging past to match John Deasy's present.

How soon the Board forgets Cortines' sexual harassment charges, that were brought against him in 2012 by fellow Cortines hired LAUSD employee Scott Graham for sexual battery, assault, and intentional infliction of emotional distress. These charges were dismissed on a legal technicality and not by an adjudication on its merits.

And even though Cortines was given a pass by LAUSD Board Member Monica Garcia on conflict of interest charges for having taken $150,000 a year for several years from Scholastics Inc. at the same time Cortines was LAUSD superintendent and contemporaneous with a $16 million a year contract Scholastic had with LAUSD, LAUSD's memory deprived board didn't seem capable of factoring this in before making him Deasy's interim replacement.

Only in the long failed insular culture of LAUSD, that steadfastly refuses to go outside its own incestuous administrative short list comfort zone of "qualified" public education insiders, would a Ray Cortines even be considered. When all is said and done, Cortines or any other candidate for superintendent must guarantee entrenched power at LAUSD that they will leave the district as dysfunctional as it was when they were hired. And sadly, that is a job qualification pretty much written in stone for holding any administrative position at LAUSD.

Clearly and inexplicably, state and federal public officials have tenaciously refuse to hold LAUSD administrators accountable to the same standards that exist in the outside world and, more specifically, in the privileged world of private schools. LAUSD administration has never been held accountable to anything even remotely resembling good business practices in this $6 billion a year plus endeavor and any who have tried to do this have been blocked by LAUSD political juice.

There is a certain irony to the fact that what Deasy and Cortines and their predecessors have done at LAUSD would have gotten them immediately fired at a prestigious private school. And as any targeted teacher at LAUSD can tell you, that which gets you charged and removed from your teaching livelihood at LAUSD would get you lauded as a great teacher at a private or parochial school, where those with money and the social capital necessary to change LAUSD have escaped- much to our collective loss. Could that be what the Brown vs. Education court meant 60 years ago when they said, "Separate but equal...is inherently unequal."

In determining who will even be considered for the superintendent's job, the seal of approval must also come from privatizers and charter school supporters Eli Broad, Bill Gates, and the Waltons, which is far more important than whether a candidate has ever had any success in finally turning around what at this point can only be  described as a purposefully failed and segregated public education system at LAUSD and around the country.

"Those who do not learn from their history are doomed to repeat it," according to George Santayana. An LAUSD that remains close to 90% Latino and African American is more and more resembling similarly polarized Greek, Rome, French, and Russian societies of the not too distant past that led to those societies decline and fall. As a history teacher, it saddens me that this lesson seems to be lost on the LAUSD Board and the puppet masters who these politically ambitious people take their orders from.

In the final analysis, John Deasy has done his job of moving an ever increasing number of LAUSD schools into charters in fulfillment of the privatization agenda, while carrying on a purge against costly high seniority teachers, through Reductions in Forces (RIFs), displacements, and housing and ultimately dismissing them on false charges. There is no doubt that he has exceed the expectations of his handlers at the Broad Academy, where he was trained. But in the process of doing this, he has become too visible, so now it is time for him to take one for the team and move on. One should always keep in mind that Deasy was never his own man. Rather, he was put into office by those seeking the privatization and monitizing of the $1 trillion a year public education cash cow

And who knows, given the short memory of the LAUSD Board and the general public, we should not be surprised if, like Cortines, who has already done two stints at LAUSD, we find Deasy's smiling face at some point in the future before the Board to yet again be considered for the position of LAUSD superintendent.

(Leonard Isenberg is a Los Angeles observer and a contributor to CityWatch. He’s a second generation teacher at LAUSD and blogs at perdaily.com. Leonard can be reached at Lenny@perdaily.com)