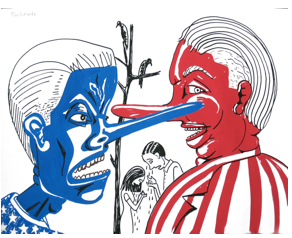 The Truth about Propaganda- The mere mention of the word propaganda evokes thoughts of totalitarian governments and third world countries.  Wikipedia says “propaganda is information that is not impartial and used primarily to influence an audience or further an agenda.  Propaganda can be used as a form of ideological or commercial warfare.”

Advertising is the commercial form of propaganda that seeks to encourage behavior that is profitable for the advertiser.  We have become used to all the brands of a product telling you how much better their product is than the competitive brand without actually explaining the difference between the products.  We listen and react, often without thinking about what was actually said.

No form of advertising contains greater distortions than political ads.   We assume that one of the two sides is lying about the other in politics.  This is the nature of politics.  In commercial ventures there is some protection against blatantly false advertising.  The competitive market will provide some protection against wildly false statements by challenging these claims in their advertising.  In commercial advertising the government will step in to control blatant lies told in advertising.  The advertising of prescription drugs requires a disclosure of potential negative side effects. The use of propaganda in the advertising of prescription drugs was deemed too dangerous for the general public.

In political advertising, the courts have held that politicians may not be limited in the distortions and lies that they can tell.  It is the First Amendment right for politicians to tell lies.  There are only two major political parties and this has been the same since the nation was created.  Commercial competition, in most areas, continues to expand but the political system in the U.S. is still two major competitors.  They both find it beneficial to their goals to continues to deceive the public with scare tactics.

The news media is now the machine allowing government to say anything that they please without much concern for accuracy or truth.  Government press releases of information are treated as gospel by media today.  The government also controls most electronic media and will allow access only to those aligned with one of the major political parties.  Encouraging flu shots without discussion of the potential negative effects is in fact propaganda.  Blind repetition of government assertions of a specific point about the intent of a foreign government, without verification or challenge, is far more dangerous.  Allowing the government to frighten its citizens in order to gain support for war has led to dire consequences.

We often hear of the mistreatment of citizens by their governments in foreign countries.  We rarely hear the fact that the United States incarcerates a higher percentage of its population than any other country in the world.  Instead we hear from politicians about the need to incarcerate more citizens for more time.  The cost of this incarceration madness is born by the taxpayer at the expense of education and medical care.  Is it any wonder we are falling behind all other developed nations in these areas?

Almost every government uses propaganda in order to get their citizens to support the actions taken by the leadership of that government.  It is a natural part of government.  The ability to criticize this behavior is part if what make this a great nation.  The news organizations that used to hold such a critical eye on government have abdicated their responsibility for higher profits and bigger salaries for their executives.

It would be unrealistic to think that any government will stop using propaganda.  In a free society, it is the responsibility of the informed citizen to critically evaluate the statements of government, business and politicians.  Do not blame someone else for the lazy citizen who refuses to make the effort to find both sides of the story.  The inconvenience of having to search for additional information is the price that must be paid to protect the freedoms that we hold.

(Clinton Galloway  is the author of the fascinating book “Anatomy of a Hustle: Cable Comes to South Central LA”.    This is another installment in an ongoing CityWatch series on power, influence and corruption in government … Corruption Watch. Galloway is a CityWatch contributor and can be  reached here. Mr. Galloway’s views are his own.)