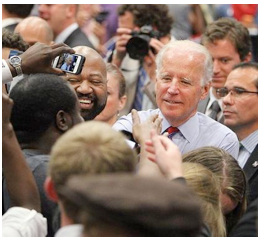 URBAN PERSPECTIVE-Vice President Joe Biden got the tongues furiously wagging again after a recent meeting with black ministers in South Carolina. First he called himself the virtually lone “white boy” in a black Wilmington, Delaware neighborhood. Then he lambasted the tea party as “crazy.”

The reference to himself as the “white boy” was more amusing than anything else. Since Biden obviously took great relish in making the point to a mostly black gathering that he’s one of them too and by extension so is the Democratic Party.

But it was his typecast of the tea party as a bunch of loons that was far more eye catching. He got it right and wrong about it. It’s easy to sneer at, and even poke fun, at a party that since it burst on the scene in the aftermath of President Obama’s first presidential election win some of its members have come off as a cross between a KKK Klavern and a PT Barnum clown circus act. After their first flush of growth, the party’s slide in getting candidates elected and gaining more popular support has been relentlessly downhill.

Polls repeatedly show that a majority of Americans look on the tea party with everything from disgust to indifference. Gallup poll numbers show that less than one in four Americans now back the party. But looks can be deceiving, and that’s never truer than in politics, and this is where Biden got it wrong about the tea party.

The best guess is that of the two hundred plus House Republicans less than half of them are their because of tea party support or are directly affiliated with the tea party.

Yet this minority within the GOP controlled House has continually held the House and Congress hostage on everything from spending on all domestic programs to its dozens of obstructionist and showboat votes repealing the Affordable Care Act.

Meanwhile, the Senate is regarded as the one sure firewall between the tea party influenced GOP controlled House getting its way on legislation and its initiatives.

GOP senate leaders have been careful to keep the tea party at arm’s length and the various official GOP campaign committees have loudly made it clear that in the 2014 and the 2016 elections they will only bankroll GOP candidates who are electable.

This means candidates who are sans the tea party stigma and odor. They have been as good as their word and now crow that the current crop of GOP contenders in the key Senate races have a better than fair shot at winning precisely because they are seen as sensible and electable.

This is much less it that than it appears. The supposedly moderate GOP Senators have toed the tea party line in opposing tougher gun control provisions and immigration reform. And they have hammered away on spending cuts on everything from Head Start to food nutrition programs, and have torpedoed key Obama administration judicial and staff appointments.

At every step, they have cast a wary but congenial eye on the tea party. There’s no mystery why. The 2014 midterm elections shape up to be a cliffhanger in the key battleground states between the GOP and Democrats, especially incumbent Democratic senators. The incessant media talk of a GOP Tsunami in those states is just that talk.

The Democrats are rolling the dice hard in the key match-ups in those states and are spending the bank on their candidates.  That makes the tea party even more vital to the GOP, shrunken numbers are not. It can make enough noise and in some districts turn out sufficient numbers to make a difference in close contests. That’s even more vital in swing districts with Democratic congresspersons who are on shaky ground with conservative voters.

The various polls that show the declining tea party fortunes have also noted that the tea party’s backer’s vehemence toward the Democratic Party is unrelenting. This presents yet another dilemma and opportunity for the GOP.

With nowhere else for tea party adherents to go other than the GOP, this could open the gates wide again for more challenges from tea party backed candidates to GOP incumbents in 2014 and beyond.

This perpetually puts GOP congresspersons in the disastrous position of having to continually look over their shoulders to see if there is a tea party candidate waiting in the wings to challenge if they do not tow the tea party line. They have turned this to their advantage by simply coopting much of tea party line on the issues without calling it that.

“White boy” Biden did not misspeak or engage in campaign ballyhoo to please black Democrats in South Carolina or anywhere else for that matter when he round housed the tea party. The tea party’s media turned anti-Obama antics have brought them richly deserved public ridicule. But beyond the ridicule they’re still very much a force to be reckoned with and the hostage taking success they’ve had and continue to have with the GOP is ample proof of that.

(Earl Ofari Hutchinson is President of the Los Angeles Urban Policy Roundtable and an occasional contributor to CityWatch.)