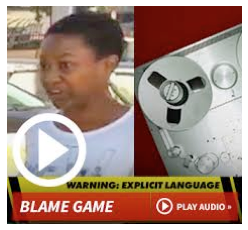 THE COP OUT-There was a very powerful scene in the movie Django Unchained where Calvin Candie, the brutal owner of the Candieland Plantation, used a "hot box" as punishment for rebellious and unrepentant slaves. Django Unchained actress, Daniel Watts has made a false claim against LAPD officers and has exacerbated the lie by refusing to apologize. I think it’s time to put Watts, in the "hot box".

Ms. Watts has been screaming about injustices suffered at the hands of Los Angeles Police Department officers for nearly three weeks now. Specifically, that she was racially profiled. Enough.

We first heard from Ms. Watts, through her face book rant and most recently again the same false claims were made in her LA Times Op-Ed, Sunday September 28. As a retired LAPD sergeant, I know firsthand how far-reaching false allegations of police misconduct can extend.

Daniele Watts knowingly made a false accusation, of racial profiling, against the  LAPD officers during their investigation of a radio call reporting a lewd act. This incident was precipitated by Ms. Watts' decision to "make out" in a car; on a public street; in full view of unsuspecting occupants in a nearby office building. Most responsible adults understand that for every choice – there is a consequence; race had nothing to do with Ms. Watts’ consequence.

It is reasonable for a citizen looking out of an office window, and after viewing what appears to be a sex act in broad daylight to notify the police. It is reasonable for that citizen to assume that a couple having what appeared to be a sexual encounter on a busy thoroughfare just might also be in the midst of a business transaction. And so then, it is therefore, reasonable and legal for police officers called to the scene of a "lewd act in progress", which is a crime, to have a conversation with the couple who happen to match the description provided by eye witnesses.  Daniele Watts was not stopped because "she is black and he is white."

Ms. Watts has spoken of her perceived unfairness as a result of the police stop.  However, let me tell you what is REALLY unfair. It is unfair to be a police officer accused of serious police misconduct when you have committed none. It is unfair to have an accusation of racial profiling a citizen place you, as a police officer, smack dab in the middle of a disciplinary process. It is unfair to quite possibly, for the rest of your career, find that you must now try to explain that you were just doing your job.

That is what awaits the LAPD officers falsely accused by Daniele Watts.

Currently, these officers are facing just such a disciplinary process on the LAPD.  For most, you have no idea what a capricious and arbitrary system the LAPD’s internal disciplinary process looks like, sounds like, and feels like. This is that disciplinary system that labels you are a racist; a liar; a - you fill in the blank and then you are made to wear that jacket for the rest of your career.

Daniele Watts has done possible irreversible damage to these officers who were just doing their job; responding to a radio call and attempting to conduct a legitimate investigation. If Ms. Watts wanted to "make out" with her male companion, perhaps they should have procured a room rather than subject a captured audience to their noon-time dalliance.

Ms. Watts’ assertion is problematic on a number of fronts. Being racially profiled by a police officer causes hurt, anger and deep-seated mistrust; making this charge should be measured and certain. Frivolous claims are injurious to real, honest to goodness, victims. An unrepentant and self-appointed victim, who seems to take pleasure in yelling fire every time she is in a building, seems grounds for the "hot box".

Going forward, even if the allegation of police misconduct is unfounded against those LAPD officers, they may find themselves needing to explain this charge that will forever more remain a part of their personnel package. Potentially, every time one of these officers attempts to promote within the LAPD, the racial profile incident could be raised and an explanation requested. This could affect the officers’ upward mobility as well as their finances.

The Los Angeles Police Department’s two-tiered system of discipline and the kangaroo court, more commonly referred to as a Board of Rights can be unforgiving, subjective and relentless in the pursuit of a guilty finding if an officer does not have his cart attached to the right horse (a la LAPD officer

Shaun Hillman). Police officers are forced to sit through this administrative hearing almost bound and gagged while others speak of your character, as though you were not even in the room. That is unfair Ms. Watts.

Ms. Watts said she "believed" she had done nothing wrong. She said that it was "obvious nothing illegal was going on." Well, the 9-1-1 caller did not find this fact so obvious. The officers, in the course of their duty, had a legal right to ask you to identify yourself during their investigation of a lewd conduct complaint; your vociferous refusal provide your ID has led us to this point.

So, Ms. Watts, if you don’t want to stay in the "hot box" or find yourself "drug through the bramble bush" (as a Candiland slave) - next time a police officer detains you for questioning, because you choose to "make out" in public; and are mistaken for something you claim not to be (a prostitute) - just show your ID.

(Cheryl Dorsey is a retired LAPD sergeant, speaker, author, and much sought after police expert on important issues making national headlines. She writes and provides commentary on police culture and surviving police encounters. She blogs at http://bit.ly/1lBL8pt and can be reached at cheryldorsey1980@gmail.com. This report was also posted on The Hutchinson News Report.)