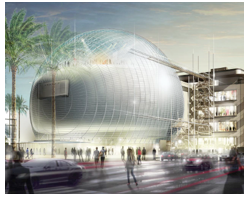 VOICES-The Draft Environmental Impact Report [DEIR] for the proposed Academy Museum at the former May Co. site was released August 28th. The document consists of nine volumes totaling nearly 7,000 pages. Public comments on the DEIR are due on October 14, 2014. The Miracle Mile Residential Association is in the midst of preparing its comments. Due to the size and complexity of the DEIR it would be premature for the MMRA to detail its official response at this time. Our comments will be shared in full in the October 15th MMRA newsletter.

The MMRA’s many points of concern for the project include:

No new on-site parking. The Academy maintains that there is adequate existing parking at LACMA’s Spaulding/Wilshire surface lot and their underground Pritzker garage to accommodate visitors to both the proposed Academy Museum and LACMA. Last year LACMA attracted 1.2 million visitors; the Academy Museum officially predicts that it will attract 860,000 visitors per year – although some experts not affiliated with the museum predict that number will be closer to 1 million.  (Read the rest here.)