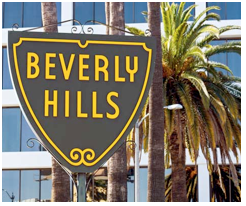 TRUTHDIG-The city with the most famous ZIP code in the world has spent years and millions of dollars trying to block a public subway expansion through its gilded gates, but its reasoning has slipped into the absurd.

Various public officials and even the local newspaper are claiming that the Islamic State—yes, that Islamic State—might not be able to resist such a target.

The plan has been to run an extension of LA’s purple line subway through the city and underneath its high school (Angelina Jolie’s alma mater), but the effort has been delayed year after year by a city that has cited numerous concerns.

This isn’t the first time a posh precinct has gasped at the notion of plebians hurtling on trains in and around its borders. There’s a reason the Bay Area’s BART service doesn’t run to Marin County, Calif.

If and when Los Angeles County is able to squelch the uproar from the 90210, the purple line will run from downtown Los Angeles to Culver City, and on to the beach from there. In a town increasingly menaced by traffic, one would think all would welcome the relief to congestion.

But there are those nasty terrorists to consider. As LAist put it: “Think of the children! The rich children!”

(Posted by Peter Z. Scheer at Truthdig.com where this perspective was first posted.)