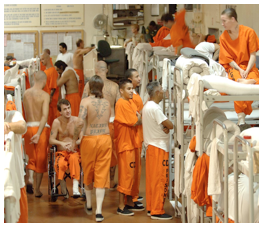 JUST SAYIN’-I have written a number of articles this year on prison-related issues.  This particular column, however, is devoted to a very crucial proposition that will help ameliorate some of the ills in the system.  Those abuses are in need of our immediate attention and, thus, our support for this initiative.

Proposition 47 (otherwise known as the Safe Neighborhoods and Schools Act of 2014), has received wide and broad support throughout the State.  PICO (People Improving Communities through Organizing), the national non-profit organization based in Sacramento but with branches throughout the state (including Los Angeles), is a major supporter.  It is the umbrella for over 400 religious, educational, and neighborhood institutions representing over 450,000 families.

In addition, there are countless others which are giving their strong support and endorsements.  Some of those include the following:  law enforcement, teachers, rehabilitation experts, business and faith-based leaders, civil rights organizations, along with a great many of our lawmakers and political organizations.

Why so much support?  In part, this is response to the suffering, distress, and frustration among inmates (many of whom recently went on a hunger strike to draw attention to their very genuine and often-heart-breaking conditions)--fights break out, people commit suicide (in greater numbers than we know about), severe depression is diagnosed all too frequently.  If redress is not employed soon, this volatile situation will erupt--making accommodations ever more difficult.

The U. S. Supreme Court stepped in in 2011, seeing the matter as violating “the Constitutional ban on cruel and unusual punishment.”  Thus, it demanded that the perverse overcrowding issues be rectified immediately (but ultimate deadlines have been postponed as a result of Gov. Brown’s repeated pleadings yet, at the same time, changes are being made, though at a somewhat snail-like pace).

What has already happened is the prison populations in many California State prisons have been shifted to County jails—a process called realignment (a “fix” that only adds to the population burden locally).  Many for-profit private prisons have been built, often employing guards who are ill-prepared to handle inmate issues.

San Francisco District Attorney George Gascon has recognized the magnitude of these problems and others that contribute to them.  Hence, he sponsored the Proposition 47 initiative.  If passed, this new law will take effect on November 5, 2014, and will apply in the following ways:

The proposition would cover such crimes as thefts of less than $950 in value (including          writing bad checks), receiving stolen property equal to that value, and possessing and consuming banned drugs meant for personal use only (such as marijuana, which is now legal for medicinal purposes).

It is also a women’s issue because 40% of the women found in our jail system now were      sent there for relatively minor crimes, like stealing diapers, food, milk, and clothing for     their children.

Through this bill, ex-convicts, having once served time for misdemeanors, will more   easily be able to find jobs and thus help expand our currently (though slowly) growing economy.  Thus, if the proposition is approved, those affected will be able to support   their families, and their children will be able to finish public school and have the opportunity to go beyond to a higher education (as will the parent who had been an    inmate).  Many of these formerly incarcerated will have learned (in prison) parenting and         other skills which will help them be successful in their pursuits and behavior.  It has been   proven that such treatment can reduce the rate of recidivism.

Passing this proposition will certainly not solve all the problems, but, unquestionably, it will make a positive difference that we all can feel—inside and outside the prison.  I ask for a Yes vote on Proposition 47.

I leave you also with the following from Crosby, Stills, Nash, and Young:

Teach your children well, their father’s hell did go by.

And feed them on your dreams …

Teach your parents well, their children’s hell will slowly go by.

And feed them on your dreams …

Something to think about.

(Rosemary Jenkins is a Democratic activist and chair of the Northeast Valley Green Alliance. Jenkins has written Leticia in Her Wedding Dress and Other Poems, and Vignettes for Understanding Literary and Related Concepts.  She also writes for CityWatch.)