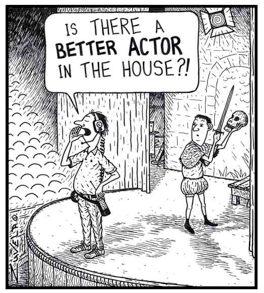 GUEST WORDS-I'll be the first person in a dogfight to throw down for equal justice and constitutional rights under the law for all people. I've been an advocate and community activist supporting race relations for nearly two decades in Los Angeles. But I'm afraid this latest example of alleged racism and discrimination by the LAPD plays more as a reenactment of the boy, or in this case, girl who cried wolf.

When I first saw the twitter feeds trending "Django Unchained Actress Mistaken for Prostitute", my initial response fell somewhere along the lines of: here we go again. As an LA native born and raised, my staunchest recollection of racial injustice at the hands of the LAPD was without a doubt the Rodney King beating by four white police officers all caught on tape in 1991. I remember the curfews put into place around the city when the officers were acquitted of the beating, along with ashes from the raging fires traveling as far west as Santa Monica when the riots began.

Over 20 years later, I am reminded just as emphatically of racial profiling and discrimination through the death of Trayvon Martin along with the events in Ferguson, Missouri -- where Officer Darren Wilson still remains uncharged for the death of unarmed teenager Michael Brown. And since those events, additional incidents of racism and discrimination by law enforcement are making new headlines...

Growing up in Los Angeles, there is in fact an undercurrent of distrust for law enforcement throughout the city. I know I'm not the only one who sneaks a quick peek at the driver's ethnicity when a car's been pulled over by highway patrol on the side of the road. It's my own cultural conditioning and perhaps even a little reverse profiling on my part as an Angeleno.

I'll also admit that I was certainly enticed by the headlines on this latest high profile story with the actress from Django Unchained (though I still don't actually remember her from the film) given my own interracial relationship with a white man.

Given the backlash against interracial couples historically, I was ready to pounce all over this one, even texting with a girlfriend this past weekend over the headlines. Of course she's a prostitute right? The man she's with is white! Shame on the LAPD!!!

And yes, I even thought of Hugh Grant's interracial indiscretion with prostitute Divine Brown in Los Angeles back in 1995 as this Django Unchained headline continued to regurgitate itself on Twitter.

But then I had the opportunity to watch the exchange and interview between CNN "News Day" co-host Michaela Pereira and actress Daniele Watts and I couldn't help but grow aggravated as additional details regarding the incident unfolded both through the audio footage taken at the time of the alleged incident and during the News Day CNN interview.

To be clear, the LAPD was responding to a 911-call that a couple was in the midst of a sexual act in a car with the door open. Law enforcement wasn't patrolling the area to then happen upon an interracial couple lip-locked on a public street outside of the CBS Studio Center in Studio City as many headlines may imply. Ms. Watts then refused to give police her identification, later admitting in her interview with CNN that because she believes in America and freedom, it is her amendment right not to have to show her ID to law enforcement unless being charged with a crime.

Not quite. Legal counsel for CNN actually provided News Day's Michaela Pereira with clarification that in the state of California, with reasonable suspicion, (in this case the 911-call) law enforcement is allowed to detain an individual for a reasonable amount of time in order to ascertain the person's identity. (Fifteen minutes went by before Ms. Watts' identity was given to law enforcement by her boyfriend.)

Clearly this was a very emotional event for Daniele Watts. It would appear that the incident all started because she was apparently in the throes of a little "TLC" with her beau in public. Watts goes on to say in her CNN interview:

"If they're [her and her boyfriend] fully clothed, it doesn't matter how passionately we are making out, it's my right and my pleasure to enjoy myself and I don't feel like I should feel shameful for that or should have to apologize for that."

Maybe so. But apparently, not everyone feels the same way -- including the unidentified individual calling 911. Ms. Watts, perhaps you were mistaken for a prostitute because of your conduct in a parked car in public, not your race.

Even in Los Angeles, some folks think it's more appropriate to "get a room" as the idiom goes, as opposed to getting it on in close proximity to strangers, associates at CBS Studio Center, and those young children who may have also occupied the same public space on this street at the time in question. But who said anything here about race in the first place?

Excerpts from the transcript of the actual audio footage published on CNN's Entertainment News site are even more revealing:

"Do you know how many times the cops have been called just for being black?" she responded.

"Who brought up the race card?" the officer said.

"I'm bringing it up because I have every right to be here," Watts said.

Hmm. The reality that racial profiling still exists not just in LA but globally, angers me too. I've experienced it -- in the classroom, in the supermarket, in Corporate America. And I'm especially irritated when racial discrimination is at play over interracial couples, their children and their families.

It hits home for me, and yes it also still exists today. But what's especially irksome is when people of color play the race card to further their own agenda or hitch a ride on the bandwagon of current news.

It challenges our credibility in communicating matters of race and injustice.

Somehow this incident is what's going to further the discussion on racial profiling or discrimination in America post Ferguson? I think not. But I commend Michaela Pereira and CNN for holding Ms. Watts to task and setting the record straight.

All this said, I do realize that it could have been me out there, as a biracial woman with white fiancé.

Only this time, I'd have been the one calling the cops.

(Kimberly Cooper is a writer, development consultant and public health advocate in Los Angeles. This perspective was posted first at huffingtonpost.com)