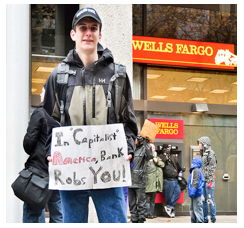 CONSUMERS BEWARE-The federal government has embarked upon a plan to limit the interest rates that are paid by banks.  While the government calls this program an economic stimulus program, the fact is the only groups that it stimulates are the banks and the wealthy. Why can't the government stimulate the economy by providing a livable minimum wage for those who work every day?

I have been a CPA for more than 30 years. I've also worked in the investment banking industry during my career. I'm thoroughly familiar with how money works. While we entertain all sorts of complex theories about the flow of money the most fundamental issue still remains supply and demand. When the government provides large quantities of money to the banking industry the basic elements of supply and demand and open markets are destroyed. As these elements are destroyed so are the aspirations of the average American citizen.

The billions of dollars of extra bank profits are extracted from the general public by virtue of the banks not being required to pay reasonable interest rates for the interest-bearing accounts that they may hold. While we are continually told to save money in order to protect our financial futures we are continually discouraged from doing that by low interest rates that are being paid by banks and money market funds. Senior citizens that depend upon safe investments are the most penalized.  Savings accounts and money market funds are paying less than 1% per year for the use of your money. The difference between interest rates paid and credit card interest are at a historical high.

While you may receive one half of one percent for your savings, the bank still charges you 18% interest on your credit card. Never in the history of America has there been a greater differential between what banks are paid and what they pay. They would have us believe that this is part of the free market but it is the exact opposite.  It is the destruction of the free market that allows this practice to go on. The government protects low interest rates by making unlimited funds available to the banks at less than 1/2% per year. The banks therefore feel that they have no obligation to pay consumers anymore than that. When the government and the consumers compete to provide money that the banks lend it is clear that the consumer will lose.

When the inflation rate exceeds the interest rate that is paid on your savings you are losing money each year you save.  How can you improve your financial situation if you are losing money by saving money? The answer is you cannot. In order to increase the yields that you receive on funds that you are holding they are trying to drive you into the stock market that is more risk. Each major bank has a stock brokerage division.

The record highs are not being brought about by such great management and product selection by the corporations. The most important factor is the large excess of money that is in stock market that is competing for the limited amount of stocks that are in the marketplace. This simple factor (supply and demand) drives up the price of stocks on a continuous basis.

When the government stops subsidizing and directing money towards the stock market with its interest rate protection plan for the banks, the stock market will have a major drop. It is simply a function of supply and demand. I do not propose that I have some idea about the relative value of numerous common stocks that are  traded in the open market. I do understand the concept of supply and demand.

You need only look at the profitability of the major banks in the United States in order to see the effect of low interest rates that are kept artificially low due to government intervention. With the tens of billions of dollars that are being paid by banks for their transgressions during the collapse of our economy you wonder how they can continue to have increased profits. The increase profits come at the expense of the average consumer and citizen.

The government is fully aware of the effect of its actions.  The big investor, Wall Street, can receive bailouts from the government when they make bad decisions. The same gifts that are given to billionaire companies are not available to average citizens. The government uses the tax money collected from citizens in order to fund the billionaire banks whose greed almost destroyed the world economy.

For other Clinton Galloway articles, go to search.

(Clinton Galloway  is the author of the fascinating book “Anatomy of a Hustle: Cable Comes to South Central LA”.    This is another installment in an ongoing CityWatch  series on power, influence and corruption in government … Corruption Watch. Galloway is a CityWatch contributor and can be  reached here. Mr. Galloway’s views are his own.)