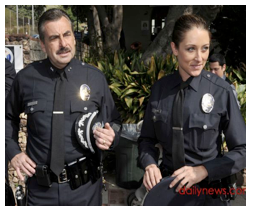 TOP COP WATCH-Los Angeles Police Department Chief Charlie Beck has been lobbying for a second term since the police commission began taking it under consideration this past May.

But Beck’s road to a second term has gotten increasingly rockier, despite record lows in violent crimes in the city and having weathered some serious crises that would have tanked most other police chiefs (i.e. Christopher Dorner episode that terrorized the police department or the more recent one, in which a detective recounted how he killed fellow officer and allegedly blackmailed former police Chief Bernard Parks into dropping the discipline hearings against him).

On July 20, the commanding officer of the LAPD’s Criminal Gang-Homicide Division, Peter Whittingham, submitted a letter to the Los Angeles Police Commission that was perhaps could completely derail Beck’s chances.

Per the city charter, the LAPD chief is required to apply to the commission for reappointment at least 180 days prior to the expiration of their first term. The commission must respond to that application, voting either to let him stay for another term or not, no later than 90 days before his first term expires. In this case, that would be Aug. 20.

In full disclosure, Whittingham has filed a lawsuit against the city, but does not address the cause of action in his letter. Whittingham filed a whistleblower suit in April. In that lawsuit, Whittingham alleges that since 2009, of the 58 possible candidates for promotion to captain, only three were African American. He, was promoted to captain in 2009, well before he filed the whistleblower suit.

Whittingham goes all in addressing the allegations of favoritism in the disciplinary process in his letter, citing a sex scandal within the department that allegedly involving Beck’s daughter Brandi Scimone (photo). Perhaps even more damning, he cites the Review Of Investigation Surrounding the Termination of Christopher Dorner that Beck conducted. Whittingham cites the Dorner case as an example of a disciplinary process gone awry.

Of those days, Whittingham wrote:

During those horrible days in February 2013, the entire community was united in support for our efforts to capture Dorner and bring him to justice. There was also a collective sigh of relief when it was announced that he died during a shootout with law enforcement personnel. However, what lingered on beyond his death were the unanswered questions about corruption in the disciplinary system. In an attempt to put the public’s fears to rest, the Chief assured everyone that he would conduct a fair/objective evaluation of the system; he was going to take responsibility for the imperfections and fix them.

In his manifesto, which he released online, Dorner cited an excessive force incident while he was assigned to the LAPD’s Harbor Division, in which Sgt. Teresa Evans repeatedly kicked a suspect in the chest and face while handcuffing him. Dorner said he reported the incident, but nothing was done.

“In fact, 10 months later on 6/25/08, after already successfully completing probation, acquiring a basic Post Certificate, and Intermediate Post Certificate, I was relieved of duty by the LAPD while assigned to patrol at Southwest division,” Dorner wrote.

Ten months later the Board of Rights, an internal disciplinary board, fired Dorner, even though there was video evidence and a witness. Even the victim testified, corroborating Dorner’s version of events.

The Inspector General investigated Dorner’s termination proceedings to determine the validity of Dorner’s allegations about the disciplinary process and ultimately found that the board’s decision wasn’t improper. Whittingham noted however that the Inspector General also refuted and discredited some of the most significant claims made in Beck’s report and called into question the credibility of the training officer. Whittingham said the Inspector General also pointed out significant discrepancies in Sgt. Evans’ arrest report, her statements to Internal Affairs investigators and her testimony in the Board of Rights.

Whittingham noted that at the time, the general public questioned whether the LAPD could investigate itself. Beck was quoted at the time as saying in response:

“I owe this community answers about how we discipline officers…I recognize the mistakes of the past, and I don’t intend to repeat them.”

Whittingham argues that not only did Beck repeat the mistakes of the past, he compounded them by distorting facts including misrepresenting the length of time it took Dorner to report the abuse incident; and that the relationship between Dorner’s training officer and Officer Dorner weren’t addressed. And that was just one of the bombshells in Whittingham’s letter.

The other bombshell was an allegation of Beck scuttling a Board of Rights hearing following a sex scandal in the department. Whittingham said that not only was the hearing scuttled, the case was settled by overturning the downgrade of a sergeant, who was charged with inappropriate sexual conduct. It is at this point Whittingham’s letter turns salacious, reading:

…this was no ordinary case. In fact, it was not even a settlement, as you may know it. This was more like extortion, blackmail, a high-jacking of the disciplinary system.

Whittingham recounts a barebones chain of events in which Internal Affairs investigated a series of allegations against the sergeant—some of which include inappropriate sexual relations with young female officers under his supervision. Whittingham doesn’t include names of individuals or station divisions.

“The allegations were sustained against him, and he was downgraded to the rank of Sergeant I, and directed to a Board of Rights (to be demoted and/or terminated, if found guilty),” Whittingham explained.

Whittingham, in recounting the story, explained that as the charges of inappropriate sexual relations were being read during the hearing, the sergeant challenged the charges by saying something to the effect:

The board chair inquired what he meant and the sergeant implicated another female officer who he said was known to Chief Beck and threatened to notify the press. In Whittingham’s recounting, Beck was notified, the Board of Rights proceedings were aborted, and the matter was eventually settled with the sergeant’s rank restored to Sergeant II. Whittingham doesn’t offer a hint as to the nature of the female officer relationship to Beck except to reference the fact that he is the father of two daughters, saying:

As a commanding officer (and a parent) with two daughters who could join the department, I shudder to think what would happen if any of my daughters was pressured and/or violated in this manner by their supervisor…I wonder what the Chief would have done had it been his daughter? This was an opportunity for the Chief to show courage and leadership, but for unknown reasons, he gave into the sergeant’s self-serving demands and in the process, the result was the irreparable damage done to the credibility of the disciplinary system.

Citing a series of Los Angeles Times articles endorsing Beck for another term based on the record low violent crime numbers, Whittingham challenged the police commission and the Times to look beyond the numbers and focus on the culture that is now in place in the department.

In order to evaluate how LAPD has evolved, how the intent of the consent decree has manifested itself in the behavior, attitude, and conduct of its employees, and the cultural shift that has taken place under Beck, the commissioners must look beyond the reported “numbers” and closely examine the “process” of how the numbers were achieved.

The Part 1 crime, Arrests, and Median response time comparison charts as shown in the Times articles, while informative, had very little to do with the direct involvement or  Beck’s leadership.

On the other hand, he was directly involved in, and responsible for, setting the tone/creating the environment that has reshaped the culture of the department over the past five years. It appears that Beck would prefer that the commissioners (and the mayor) focus their attention on 11-years of crime reduction data, but if they really want to know where the dead bodies are buried in this department, they will need to take a closer look at the last 5 years of risk-management numbers.

In his nine-page letter, Whittingham included bar graphs comparing the total number of complaints versus sustained complaints—complaints in which an investigation found that the complaint occurred as alleged; use of force incidents that did not result in death or hospitalization versus the number of officer involved shootings; and the number of employee sick hours covering the last year Bill Bratton was chief and all five years of Beck’s tenure.

Whittingham said that the numbers tell of a marked change in the police department’s culture under Beck, noting that in the last year of Chief Bratton’s term in 2008, of the 5,826 reported complaints, 1,020, or 17.5percent, were reported as having occurred as alleged. Those numbers were consistently reduced by half throughout Beck’s tenure.

Officer involved shootings under Beck ranged between 63 and 96 incidents per year, a number greater than Bratton’s final year by 61 and 146 percent.

During this same period of time, the city and the Los Angeles Police Protective League representing about 9,900 officers have been in contract negotiations—negotiations that have been turbulent at best.

The rank and file rejected the city’s current proposed offer in a July 8 through July 11 vote. In a released statement, the Police Protective League noted that the vote was due to “deep-seated frustration and anger among the officers caused by their low pay, working conditions, a disciplinary system that is viewed as biased and unfair, and their perception that management is unreceptive to their problems.”

League went on to say that “Adding to the frustration [was] the Department's refusal to revamp a disciplinary system that has lost all credibility because it is viewed as arbitrary and inconsistent.”

While other whistleblowers in Whittingham’s position have resigned or retired before filing such lawsuits, Whittingham stayed with the department, explaining that he loved his job and the people he works with. He also said he has received a great deal of support from within the department.

“The common thread through all of this is that more people in the department are more supportive than you’ll ever know.”