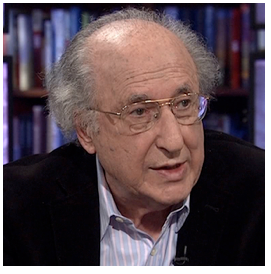 TRUTHDIG-The Israeli assault on the Palestinian people in the Gaza Strip has entered its fourth week. This military attack, waged by land, sea and air, has been going on longer than the devastating assault in 2008/2009, which killed more than 1,400 Palestinians. The death toll in this current attack is at least 1,300, overwhelmingly civilians.

As this column was being written, the United Nations confirmed that a U.N. school in Gaza, where thousands of civilians were seeking shelter, was bombed by the Israeli Defense Forces, killing at least 20 people. The United Nations said it reported the exact coordinates of the shelter to the Israeli military 17 times.

Henry Siegman, (photo) a venerable dean of American Jewish thought and president of the U.S./Middle East Project, sat down for an interview with the “Democracy Now!” news hour. An ordained rabbi, Siegman is the former executive director of the American Jewish Congress and former executive head of the Synagogue Council of America, two of the major, mainstream Jewish organizations in the United States. He says the Israeli occupation of the Palestinian territories must end.

“There is a Talmudic saying in the ‘Ethics of the Fathers,’” Siegman started, “‘Don’t judge your neighbor until you can imagine yourself in his place.’ So, my first question when I deal with any issue related to the Israeli-Palestinian issue: What if we were in their place?”

He elaborated, “No country and no people would live the way Gazans have been made to live ... our media rarely ever points out that these are people who have a right to live a decent, normal life, too.

Born in Germany in 1930, Siegman and his family were persecuted by the Nazis. “I lived two years under Nazi occupation, most of it running from place to place and in hiding,” he recalled. His father took his mother and their six children to Belgium, to France, to North Africa, then, after two months at sea, dodging German submarines, they arrived at Ellis Island.

His father was a leader of the European Zionist movement, which sought a national homeland for the Jewish people. Siegman said: “As a kid even, [I was] an ardent Zionist. I recall on the ship coming over, we were coming to America, and I was writing poetry and songs—I was 10 years old, 11 years old—about the blue sky of Palestine. In those days we referred to it as Palestina.”

Henry Siegman became a prominent leader in American Jewish life. When I asked him to reflect on his long history with Zionism and to respond to the current assault on Gaza, he said: “It’s disastrous. ... When one thinks that this is what is necessary for Israel to survive, that the Zionist dream is based on the repeated slaughter of innocents on a scale that we’re watching these days on television, that is really a profound crisis - and should be a profound crisis - in the thinking of all of us who were committed to the establishment of the state and to its success.”

I asked Siegman to watch a clip from CBS’s “Face the Nation.” The show’s host, Bob Schieffer, recently closed the program by saying, “Last week I found a quote of many years ago by Golda Meir, one of Israel’s early leaders, which might have been said yesterday: ‘We can forgive the Arabs for killing our children,’ she said, ‘but we can never forgive them for forcing us to kill their children.’”

Siegman said that he had seen the broadcast. He replied: “If you don’t want to kill Palestinians, if that’s what pains you so much, you don’t have to kill them. You can give them their rights, and you can end the occupation. And to put the blame for the occupation and for the killing of innocents that we are seeing in Gaza now on the Palestinians—why? Because they want a state of their own? They want what Jews wanted and achieved?”

As the United States resupplies Israel with ammunition, more than 250 children in Gaza have been killed. Instead of providing weapons, the U.S. and the rest of the world should pressure Israel to stop the slaughter.

(Amy Goodman is the host of “Democracy Now!,” a daily international TV/radio news hour airing on more than 1,200 stations in North America. She is the co-author of “The Silenced Majority,” a New York Times best-seller. This column appeared most recently at truthdig.com)