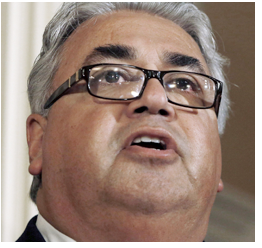 CALIFORNIA WATCH-California is quickly becoming a leader for disenfranchising voters. Recently a third elected California State Senator was suspended from his ability to sit in the State Senate. The reason for this removal was the fact that the federal government indicted him for corruption and gunrunning.

Still a third State Senator is under indictment for political corruption and is also suspended from attending sessions of the state California State Senate.  Two of these three persons come from the Los Angeles County area. By refusing to allow these persons to attend the sessions of the California State Senate the people that are represented by the Senators have in fact been disenfranchised. They have been disenfranchised by corruption.

While the State Senate has 40 members the removal of three for cause is an astronomical 7 1/2% of the entire body. If this same ratio was applied to the to the general population that would mean in the last one year, in the city of Los Angeles, with a population of almost 2,000,000 people approximately 50,000 would have recently been convicted of felonies and another 100,000 would currently be under federal indictment for major crimes.  This sort of crime rate would be the equivalent of anarchy in the streets. While we will not tolerate anarchy in the streets we will tolerate it in our legislative bodies.

In the city of Bell in Los Angeles County, the mayor and four senior officials of the City of Bell were recently sentenced to prison for political corruption. This represented about half of the senior officials in the city of Bell. These people have already been convicted and they represent about 50% of the senior officials of the government of the city. If we were to transfer that same conviction rate to the general population of Bell, a city of 35,000 people, we would have 17,500 individuals convicted of felonies and being sentenced to prison from one city.

In the city of Rosemead in Los Angeles County, the former mayor was recently sentenced to federal prison for charges regarding bribery and extortion while he was the mayor. Numerous other cities in Los Angeles County have also had elected officials charged and convicted of crimes related to their public office. These are merely the ones that are caught. We are not gullible enough to believe that each arrest has stopped the crime problem. It is quite clear that a crime problem exists in our legislative bodies at both the state and local levels but where are the dragnets and SWAT teams.

We do not believe that when they catch a bank robber that he is the only bank robber in town. We know that there are more bank robbers and other criminals that have not been caught. This is the same situation with government. For all that they catch there are more they have not caught. What sort of damage is done when the government is corrupted and being sold to the highest bidder?

While we want to believe that these are isolated incidents, we know that there is a systemic problem in the government that encourages this sort of corruption to exist.

There are enticements around each of us every day to violate the laws that exist. The decision to violate the laws is not only on those who would propose that you violate such laws but also mainly on yourself for lacking the will power to stand up for what you have sworn to do. Each of these people has taken an oath of office to not do the things that they have convicted of or indicted for.

Can it be that these people feel that they are so powerful they believe that they are no longer subject to the laws? These are the people that make the laws and yet they are the ones that violate them.

Our elected officials have become little more than commodities available for purchase by the highest bidder.

For other Clinton Galloway articles, go to search.

(Clinton Galloway  is the author of the fascinating book “Anatomy of a Hustle: Cable Comes to South Central LA”.    This is another installment in an ongoing CityWatch  series on power, influence and corruption in government … Corruption Watch. Galloway is a CityWatch contributor and can be  reached here. Mr. Galloway’s views are his own.)