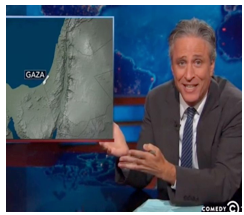 ALPERN AT LARGE-Inasmuch as we want to turn our backs on the nightmares of the world, the world is getting smaller and our local economies are increasingly being impacted by global events.  A downing of a civilian airliner here, a new warring conflict there, children being used as human shields to both change our political dynamic and keep American domestic wages pathetically low--all of these can and will someday affect our economic and political future--right here at home!

The nightmare in Gaza is just that--a nightmare.  The people there deserve a better future, and yet the question must be vigorously asked:  WHO are the greatest threats to the present and future for Palestinian men, women and children?

Well, we can always go with the misinformed tripe and hype that goes with a complete ignorance of history and greater detail--the Israelis and their Jewish worldwide allies (and, oh yes, their fundamentalist Christian allies, to boot) are behind the Gaza bombing, so clearly they are to blame.

We can also read the history of the creation of Israel, and the many givebacks of Israeli territorial conquest after Israel was repeatedly blitzed by its several neighbors in an attempt to wipe Israel off the map and help finish the job that the Third Reich started.  We can also read about the billions of Western (and Israeli) dollars to support the Palestinians, and where that money went to.

Or...we can listen to the biased blathering of Jon Stewart on The Daily Show, and ignore the fact that Stewart never had or has the courage to speak his mind outside of his all-liberal, all-anti-conservative echo chamber of an audience.

Yet we can also question why the hell anyone gives a damn what Stewart or anyone in New York, Hollywood or the radio (liberal, conservative or otherwise), because they're often so insulated and gushed over that they've drowned themselves in an inaccurate sense of their own self-worth.

And we can also question why so many young people decide to learn the news from Comedy Central instead of a newspaper, the Internet or any other venue that strives (and understandably with mixed results) to achieve journalistic integrity and true fact-checking over cynical one-liners that usually go away with the end of one's teenage years.

But it's important to understand that not only is there a disparity between individuals of all generations who strive to really read the news and understand all sides of an issue, and those individuals, usually Millennials, who eschew the complex learning process that involve both time and work and who choose instead to learn the news from a snarky, sarcastic comedian.

Furthermore, it's also of note to observe how so many Jewish individuals who normally are as liberal as they come are suddenly so hawkish about the current Israel/Gaza strife, and in particular those of the past two-three generations who've actually lived through the nightmares of the Israeli/Arab wars, the PLO terrorist era, and the repeated attempts of the West and Israel and the most intellectual Palestinian elements to create a peaceful, modern Palestine.

Perhaps the older Jewish individuals, as well as younger Jews who've actually had the curiosity to ask their parents what's going on now--and what went on for generations--have been witness to the reality behind the tactics of Hamas, such as hiding their missiles in religious institutions, hospitals and U.N. schools.

Those of us who remember the 1948 War of Israeli Independence, when the Palestinians were told by their Arab neighbors and allies to leave Israel so the Jews could be wiped out in a Nazi-like genocide ...

... but when that did not happen, and Israel both survived and took the lands of those who'd left them to be slaughtered, the Palestinians were abandoned and left to die in refugee camps by these same Arab neighbors.

Those who remember Kiryat Shemona, Munich, the Achille Lauro, the disco and bus bombings aimed at civilians, etc., and recognize the role that Iran (Israel's sworn enemy and a nation dedicated to destroying Israel) has in arming the Palestinians have a neverending battle with those who choose to ignore history as too boring and irrelevant--and therefore risk repeating it.

So while Libya and Iraq and Syria fall apart at the hands of the Islamists (who are NOT mainstream Muslim, but who apparently delight in attracting those who once were drawn to anarchism, fascism and communism as a way to control the greater population), Turkey falls away from the West and tilts towards international pariahs such as Iran, other nations can choose DIFFERENTLY.

And, as I stated in my last CityWatch article, WE must choose as well.

Both Egypt and Israel have very recently taken a firm stand towards modernity and pulled back from the moral relativism that offers Islamism a chance to be treated like any other movement.  One can only wonder what 1930's Germany would have done had it, too, realized that the National Socialist Party was revving up the impoverished masses to create the disastrous Third Reich.

There MUST be a Palestine, and there MUST be an end to the suffering of the Palestinians in Gaza and in the West Bank.  It was not long ago that Gaza had a choice, and elected not only a terrorist entity like Hamas (who, to be fair, also has a bureaucratic wing that doesn't just obsess over Jew-hatred and Christian-hatred), which then ended democracy altogether by killing and expelling its Fatah rivals.

To be fair, the Fatah had and have a horrible history of fraud and corruption under the late Yasser Arafat, who bilked the West for billions while exploiting (and even prolonging, and aggravating) the poverty of the Palestinian refugees for his own benefit.  But Hamas, as evidenced in Gaza, appears to be no better than Arafat and the PLO.

Yet a leader like Mahmoud Abbas of the Palestinian Authority is an example of by far more a reasonable man to do business with than Khaled Meshaal, the Hamas leader living in luxury in Qatar while the Palestinian people wallow in poverty and hopelessness.  Palestinians can choose, and choose better than they've done in the past.

So what can Egypt and Israel choose?  What can WE choose?

We can certainly avoid the examples of Arafat and Meshaal and make sure that Western funding goes to water, infrastructure, schools and economic enhancement for the Palestinians ... instead of the missiles, tunnels, and other military operations to which foreign aid has been diverted.

We can certainly limit-set with Iran and Turkey--whose leader, Recep Erdogan, appears to be dedicated to dragging Turkey into the sewer of Islamism and who reportedly no longer talks to President Obama--and we can certainly state the obvious :

IT IS HAMAS, AND IRAN, AND THOSE WHO SUPPORT THE DESTRUCTION OF ISRAEL MORE THAN THE CREATION OF A PALESTINE, WHO ARE THE GREATEST THREATS TO THE PALESTINIAN PEOPLE.

(Or IS it obvious in today's world of short attention-spans and a desire to get at the truth?)

What will be the result of the Gaza conflict is anyone's guess, but of note is that both liberal and conservative Jews (and their Christian and their other Western-influenced allies) have coalesced behind Israel's drive to end the reign of Hamas.

Most of the regional Muslim neighbors, with the notable exceptions of Qatar, Turkey and Iran, have ignored Hamas and left it to die--so perhaps they, too, have come to realize that Hamas is no reasonable neighbor, friend or ally to anyone.

It is hoped that Western and humanitarian aid can reach and stay with the Palestinian refugees...but without the secret diversions of foreign funds to military causes that have been the mainstay of Palestinian leaders' operations for decades (and to the unspeakable suffering of most Palestinians).

That will be the ultimate fight--for Egypt and Israel to reopen the borders once the military wing of Hamas is completely uprooted, in the same manner that we see Egypt uprooting the Muslim Brotherhood, Hamas' counterpart, in their own nation.

And for those of you who found this piece (or any article on the subject) to be too boring or detailed to read through it, or if the never-ending attacks and slaughters of Jews and Christians in the Middle East is just too dry a subject for you, you can always go to Comedy Central and enjoy a funny-but-dangerously-oversimplifying sketch on the matter instead.

(Ken Alpern is a Westside Village Zone Director and Board member of the Mar Vista Community Council (MVCC), previously co-chaired its Planning and Outreach Committees, and currently is Co-Chair of its MVCC Transportation/Infrastructure Committee.  He is co-chair of the CD11 Transportation Advisory Committee and chairs the nonprofit Transit Coalition, and can be reached at Alpern@MarVista.org .   He also does regular commentary on the Mark Isler Radio Show on AM 870, and co-chairs the grassroots Friends of the Green Line at www.fogl.us .   The views expressed in this article are solely those of Mr. Alpern.)