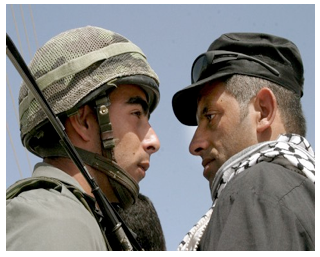 PERSPECTIVE-It’s difficult to have a conversation with someone who wants to get rid of you. That is why Hamas militants and Israel’s right-wing-dominated government are each on such a destructive path.

Hamas, the aggressive rival to the more negotiation-minded Palestinian government headed by Mahmoud Abbas, continues to blast rockets from Gaza into Israel, rejecting an Egyptian-proposed truce. So far, the Iron Dome missile defense has protected Israel.

Meanwhile, Israel is pounding away from the air at suspected missile launching sites in Gaza. The toll remains one sided, with more than 190 Palestinians killed since hostilities began July 8, and many more wounded, according to The Associated Press. As of Wednesday morning, one Israeli had been killed by the rockets, with others wounded. And the three dead Israeli teenage boys certainly rate as casualties of war.

It’s possible a grudging cease-fire will emerge from the latest carnage, as has happened in the past. But all it will do is maintain the status quo until the Israelis and Palestinians go at it again.

The only solution is two states, one Israeli and the other Palestinian, existing side by side. But as it now stands, that appears impossible.

Israel’s prime minister, Benjamin Netanyahu, expressed his distaste for an independent, sovereign Palestine at a news conference last week, as reported and analyzed by David Horovitz, founding editor of the online news site Times of Israel. He quoted the prime minister, speaking in Hebrew, as saying, “I think the Israeli people understand now what I always say: that there cannot be a situation, under any agreement, in which we relinquish security control of the territory west of the River Jordan.”

Horovitz, who seems to have insight into where the Netanyahu government is going, added this analysis: “Not relinquishing security control west of the Jordan, it should be emphasized, means not giving a Palestinian entity full sovereignty there. It means not acceding to ... Abbas’s demands, to Barack Obama’s demands, to the international community’s demands.

This is not merely demanding a demilitarized Palestine; it is insisting upon ongoing Israeli security oversight inside and at the borders of the West Bank. That sentence, quite simply, spells the end to the notion of Netanyahu consenting to the establishment of a Palestinian state. A less-than-sovereign entity? Maybe, though this will never satisfy the Palestinians or the international community. A fully sovereign Palestine? Out of the question.”

In other words, a Palestine run by the Israelis who would regulate Palestinians’ freedom, restricting them to areas under strict Jewish control and away from the rapidly expanding settlements.

The vision of Hamas—otherwise known as the Islamic Resistance Movement and rival of Abbas’ Palestine Liberation Organization—is equally wrongheaded.

The Hamas charter says Palestine is Islamic. Invoking the old anti-Semitic trick of using Zionist as a synonym for Jew, the charter says the “Zionist invasion is a mischievous one. It does not hesitate to take any road, or to pursue all despicable and repulsive means to fulfill its desires. It relies to a great extent, for its meddling and spying activities, on the clandestine organizations which it has established, such as the Freemasons, Rotary Clubs, Lions, and other spying associations. All those secret organizations, some which are overt, act for the interests of Zionism and under its directions, strive to demolish societies, to destroy values, to wreck answerableness, to totter virtues and to wipe out Islam. It stands behind the diffusion of drugs and toxics of all kinds in order to facilitate its control and expansion.”

As evidence, the Hamas charter cites the “Protocols of the Elders of Zion,” the notorious anti-Semitic hoax first published in czarist Russia and embraced by Hitler.

Hamas wants Israelis to withdraw from the West Bank and its settlements, the Gaza Strip and East Jerusalem. It demands the return of the Palestinian families displaced by the 1948 war, which had resulted in the creation of an independent Israel. This return, bringing an Arab majority, would endanger—or probably end—Israel’s existence as a Jewish state. Rather than a two-state solution, Hamas favors a one-state solution, an Islamic Palestine where Jews could live under Hamas sufferance.

A one-state solution is supported by elements of the American left, which questions the very legitimacy of the Jewish state. Most recently Max Blumenthal’s book “Goliath” advocated this point of view, Israel not as a Jewish state but a multiethnic democracy. But such a vision ignores history.

There are reasons that the young Jews living in Europe more than 100 years ago settled on Palestine as a Jewish homeland. I tried to explain it in a review of “Goliath” on Truthdig: “It’s not as though the Jews picked up a travel guide and chose to settle in Israel sometime in the 20th century. The Babylonians and the Romans exiled Jews from Palestine, but a small number remained through the centuries and religious services through the Diaspora always ended with a ringing ‘next year in Jerusalem.’ The Holocaust, of course, was a pivotal event, but before that were the murderous pogroms in Russia and the anti-Semitism deeply rooted in Europe, all of which led to the creation of Zionism.”

Believing this does not mean the blind support of Netanyahu and Israeli leaders who are more radical than him.

They want a skeleton, restricted Palestinian state on parts of the West Bank, under Israel’s thumb with little or no sovereign power—an Israeli version of apartheid. Hamas, on the other hand, invokes the “Protocols of the Elders of Zion” and fights for elimination of the Jewish state.

President Obama told Muslim Americans attending a White House dinner this week that “the situation in Gaza reminds us, again, that the status quo is unsustainable. The only path to true security is a just and lasting peace between Israelis and Palestinians.”

But with the Netanyahu government and Hamas calling the shots, neither Obama nor anyone else knows how to get there.

(Bill Boyarsky is a columnist for Truthdig, the Jewish Journal, and LA Observed. This piece was posted first at ZocaloPublicSquare.org)