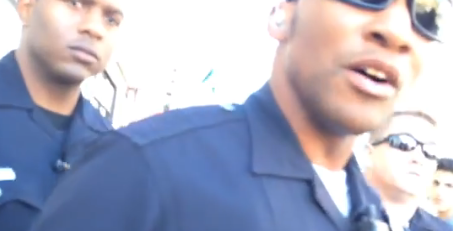 VOICES-Officers of the Los Angeles Police Department (LAPD) assaulted me without provocation as I spoke to and filmed participants at a pro-Israel rally on the north side of Wilshire Blvd. by the Israeli consulate this evening.

I was handcuffed and threatened, and I caught it all on video.

Across the road, on the south side of Wilshire, was a Palestine solidarity rally called for by a number of peace and justice groups to protest Israel’s rampage of lethal violence against Palestinians in the occupied West Bank and Gaza Strip.

I arrived directly to the pro-Israel counter-demonstration without first having been to the Palestine solidarity rally. I wanted to speak to people and record their opinions.

As I was arriving, I heard one participant say: “A good Muslim is a dead Muslim.” I approached him and asked him, “What could make all this stop?” He answered: “Eliminate Muslims” and launched into an anti-Muslim tirade.

Another person heard him and objected to his words, telling me, “That’s not true. Terrorists are the problem,” and “I have a lot of Palestinian friends.”

We were having a conversation when, without any warning, I was assaulted by LAPD officers. I was profiled: one officer asked, “Are you with the Palestine?”

In the video, the officers claim that I had disobeyed an order. This is untrue. I was assaulted and restrained without warning and when I asked the officers to stop assaulting me and let me go, they put handcuffs on me.

One officer can be heard on the video saying, “I know you are trying to fire everyone up.” This is also untrue – I was asking questions and listening to the answers.

I believe he may have said this because he suspected that my camera was still running. An officer also said that they were trying to “keep the peace” and “keep me safe,” all while physically assaulting me.

After the video cuts, the sergeant was called. I was questioned about my political beliefs and asked, “Which side are you on?”

I answered, “I am on the side of peace and justice.” The sergeant asked, “Which side is that?”

I responded, “Which side do you think it is?”

The sergeant said they would remove the handcuffs if I agreed to leave the scene and not come back. I agreed and I was escorted across Wilshire Blvd. where I joined the Palestine solidarity rally, which appeared to have several hundred people, more than the dozens waving Israeli flags and chanting, “Who are we? Israel!”

In my book The Battle for Justice in Palestine, I write about the close cooperation between Israel and US big city police departments, including the LAPD.

In January, as Rania Khalek reported, LAPD top brass went on their most recent junket where they fell in love with Israeli drones.

I wonder if it is that cooperation that predisposes officers to see anyone suspected of being “with the Palestine” as a threat.

What is clear is that I was profiled and treated as a threat like so many Angelenos, particularly people of color.

(Ali Abunimah is the author of One Country: A Bold Proposal to End the Israeli-Palestinian Impasse and a fellow with the Palestine Centre in Washington, DC.  Abunimah is Executive Director of The Electronic Intifada. This first person account and video were posted most recently at CommonDreams.org)