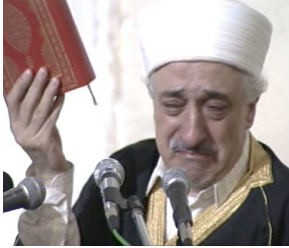 EXPOSED-The Gulen Movement is advertised by its' leader and his PR advisors as a "transformational and social movement led by Turkish Imam, scholar and preacher, Fetullah Gulen."

This highly secretive movement is often compared to the Catholic secret society, Opus Dei. Their goal is to be the world's leading Muslim network, and although it advertises that "it is funded by its 'own members" it is actually funded by American tax payers.

In the real light of day, Fetullah Gulen, who is the single largest charter school operator in the U.S., was chased out of Turkey by current Prime Minister Erdogan and his forces in 1999 and was given refuge in the United States, first by Bill Clinton, then by George Bush, and now by Barak Obama.

He lives in a large compound with a fortress-like surrounding and many armed guards in the Pocono Mountains in Pennsylvania.  From this protected enclave, and with the further protection of our government, he is fomenting revolution in Turkey to turn his homeland from a secular nation into an Islamist state ruled by strict Sharia law.

Even though the Turkish regime wants him extradited to stand trial for promoting insurrection and various other scandals, he is safe in America, calling the shots for extremists in Turkey.  He sends huge amounts of money to the Middle East and Turkey to promote his cause.

And this prodigious donation to influence Turkish/Sharia politics is all paid for by We the People, the American taxpayers.

Gulen is the largest owner of charter schools in the U.S.  He owns over 147 active charter schools with dozens more awaiting approval in many states including California, with tens of thousands of students who are taken out of public schools to attend his Islamic based charters which teach Turkish language as their prime language and their main focus on Turkish history.

He used to also teach Sharia law in these gender segregated schools, but when that became a problem he focused on math and science instead, and now teaches Sharia law on weekend outings for his students. His plan is to educate all students to follow him as their religious and political leader of Turkey, and all of them to return to his homeland with him as his supporters.

Most of his teachers, and all of his principals and other organizational leaders, are Middle Eastern men who are allowed into the U.S. on green cards to run this multibillion dollar operation.  According to the tax research done by Sharon Higgins who is the best reporter on his activities, he nets about $500 million a year, all on the back of the American taxpayer.

Each student gets ADA money, average daily attendance, which the school district is mandated to release since the money for education follows the student.  Each school has between 300 - 800 students financed by American tax money at about $7,000 per student, which represents a huge fortune over the past 15 years.

It is this money that is paying for fomenting revolution in Turkey where Gulen plans to return soon to become the nation's leader and make his country a true Sharia ruled state.  This means that girls no longer will be going to school, and all will be forced to wear purdah.  Boys will be studying mainly Koran as in madrassas world wide.

In an addition to American charter schools, Gulen runs about 1,000 other schools world wide.  His goal it would appear is to establish a second Ottoman Empire and all under rigid Sharia law.

Erdogan and his government see Gulen as a danger to their secular nation. He is pressing criminal charges against Gulen for a wire tapping scandal, and he feels that this is not only a religious movement, but it is also political and illegal. He accuses the U.S. of sheltering and supporting Gulen, and he wants him extradited to Turkey to face criminal charges.

All of this is factual and further information can be found online.

So the questions are why would three consecutive American administrations let Gulen operate under the aegis of American protection?  Also, why is there so little media attention paid to this secret group which, like leeches, is bleeding American public schools and filching the money for their own religious/political purposes, from the pockets of American tax payers?

The LA Times published a front page story on Gulen some months ago, but they did not print a single letter to the editor written by the many teachers in Joining Forces for Education, nor other members of the general reading public which asked these questions.  When they got complaints and questions as to why they dropped the whole issue, they were totally and completely silent.

Why is the mainstream media avoiding reporting on all this public information?

Are colluding with our leaders to keep this man in a protected shell while he continues to be a main player in shaping the politics of the Middle East?

(Ellen Lubic is Director of Joining Forces for Education and a public policy educator in Los Angeles. She is an occasional contributor to CityWatch. Her views are her own.)