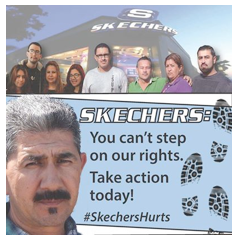 These descriptives are not nearly adequate to describe the appalling working environment at a number of companies with which we are all too familiar and which too many of us patronize (most of us being unaware of the conditions under which their employees work)--businesses like Target, Walmart, Nike, Gap,and Skechers.

Earlier this week, I was part of a teleconference whose purpose was to enlighten the participants (including other media people) about the port situation as it pertains to the workers.  Occidental College professor, Peter Drier, introduced us to many of the injustices that were being perpetrated by a number of companies which are more concerned about the bottom line than about the people who make those profits possible—their warehouse and driver employees.

He wrote the foreward to the detailed piece called “OUT OF STEP:  How Skechers Hurts Its California Supply Chain Workers” and shared much of its well-researched and annotated information with us.  He was unequivocal about his concerns regarding Skechers, the fastest-growing company in the footwear industry, reportedly earning record profits of $1.8 billion.  It is also an enterprise, says Drier,  found guilty of a multitude of worker violations for wage-theft, safety conditions, and health issues but, at the same time, is unwilling to perform reparative actions—even when heavily fined.  He urged that we be especially watchful of its practices.

It uses companies like Green Fleet Systems (shoes) and Olivet International (luggage) as subcontractors at the ports of Los Angeles and Long Beach to load the cargo containers onto trucks (and/or trains) which are then taken to warehouses in the Inland Empire (Moreno Valley) where they are unloaded, goods sorted, and reloaded onto trucks which take them to the stores that sell the items on-site or deliver them to the consumer.

Without question, we depend on these workers to “deliver the goods” for our consumption. Though their services are strategic to the supply chain, the employees are generally considered chaff that can easily and thoughtlessly be discarded.  Most of these employees are immigrant laborers, often speaking little English.  Frequently, they are coerced into signing away their rights through contracts they can neither read nor understand.

Forty ship containers are unloaded every day by workers who are often forced to work 59-hour weeks but lucky if they are paid for 40 hours.  Green Fleet and Olivet insist that these laborers are independent contractors who must pay for their own gasoline and truck maintenance but are not deserving of the typical Teamster salary.  These companies deliberately misclassify them so as not to list these workers among their regular employees, thus denying them the status and benefits of normal or traditional employment (despite the Employee Development Department’s deeming the workers as employees in the real sense of the word).

Incidentally, if these workers were truly independent contractors, the government would not be making unemployment payments to them when they get fired or laid off.  Skechers and Walmart and others just cannot have it both ways.

Skechers is being asked to require its subcontractors to abide by rulings cast by the NLRB, Cal OSHA, and other state and local governmental entities.  As of the time this column was written,  Skechers has failed to comply.  It claims it will look into the offenses and get them rectified, but Green Fleet and Olivet are still flagrantly disregarding rulings and continue to violate health and safety standards and fair-wage provisions which include illegal payroll deductions.

At the recent Skechers annual meeting in May, the CEO Robert Greenberg, promised to investigate.  Nothing good has come from his empty promises.  In fact, numerous agencies have assigned substantial fines adding up to millions of dollars in penalties for health and safety and other violations, but, apparently, that is not enough to force Skechers and its sub-contractors to remediate those areas for which they have been found deficient.  Rulings have simply been ignored!

Employees who grieve their treatment (some of whom shared their stories during the conference) are subject to punishment.  One person was suspended for 9 days because of his efforts on behalf of himself and his fellow workers to protest the company’s disgraceful practices.  Others, like Mateo G, have been fired outright.  Many have been threatened with beatings.  Unbelievably and outrageously, according to workers who offered testimony during the webinar (such as Yasser C), Skechers encourages (at least tacitly) such conflict between acquiescent employees and those who are part of the ongoing struggle (la lucha) to correct the wrongs being perpetrated.

Many employees are forced to work in stifling warehouses without air conditioning (according to claims by Cesar G, a former warehouse worker), and if they take a water break to cool off, they are subject to unpaid suspension.  (I have reported on some of these conditions before.)  They are pressed to work faster and faster, a condition that inevitably leads to mistakes and injury.  There are any number of egregious exploitative practices such as irregular and dangerous stacking of boxes, the use of run-away fork lifts that are not being maintained, and the blocking of fire exits!  Unbelievable!

These sub-contractors hire “union busters” (there is no union presently but many workers would like to organize one) to intimidate workers’ safety and, sometimes, go so far as to threaten their very lives.  The laborers are told that unless they withdraw their filed grievances, the company will fire those protesting employees and other workers and is also willing to close the company altogether rather than accede to worker demands (other companies are on record for making similar threats and even closing down).  In the past, I have met such workers as they share similar stories during demonstrations or at meetings.

To date, the movement to force change for these practices has garnered the support of more than 25,000 petitioners.  The coalition of such organizations is demanding that “sweatshop-like conditions and workers’ rights violations” be mitigated immediately.  They want to hold “Skechers accountable for exploitative working conditions.”

This company is trying to pawn off its responsibility to its sub-contractors, but rulings have found this policy unacceptable.  Skechers can require that enterprises like Green Fleet and Olivet abide by recent rulings.  Often, when departments like Cal OSHA are on-site to observe what is transpiring regarding worker conditions, Skechers affiliates have temporarily cleaned up their act, but after the oversight teams are gone, the supervisors authorize a return to the egregious conditions for which they have earlier been found guilty.

It takes audacity for the workers to make these claims before the media and in public--demonstrating the kind of bravery and courage that most of us lack!.  Kudos to each of them!

We need to put pressure on Skechers (and any company that continues to violate reasonable work conditions) to intercede on behalf of the workers.  These hard-working laborers are trying to earn a living and are willing to work diligently to support themselves and their families and can thus make subsequent contributions to their community through increased purchasing power.  They are virtually precluded from doing this, however, under the present circumstances.

Skechers and other companies outsource to third-world countries (which don’t enforce the high standards that the United States does) where children and women, in particular, work at starvation wages and under unsettling conditions (not unlike the circumstances in Mumbai—remember that?!).  Those workers make shoes and apparel as well as luggage and toys (often with toxic coating) so that the American customer can buy more for less.  We are no longer the manufacturing country that we used to be 50 years ago.  Ninety-five per cent of our apparel and shoes is made overseas.  We must change that scenario too.

According to Dr. Dreier, Skechers and others actually do have total control and oversight of every aspect of their industry.  They have a hands-on policy that is strictly followed.   Thus, any claim that the Skechers corporate leaders and the CEOs and CFOs of similar companies are not aware of current conditions is neither true nor possible. They must take responsibility for what transpires under color of their authority!

Spread the word about Skechers.  Patronize elsewhere.  Buy other brands.  Be part of the movement for fair practices.  Apply pressure.  Speak up.  Put your cell phones, note pads, and computers to good use.  We can get involved to make this unacceptable situation better.