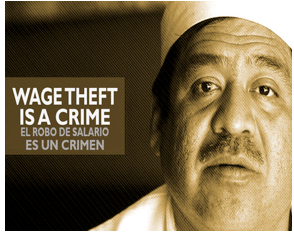 ACTION REPORT-At Brave New Films, much of our work focuses on the ways powerful people profit from exploiting non-powerful people.

Whether it's private prison companies profiting from locking up poor people for non-violent offenses, or the world's billionaires buying governmental policies that benefit them at the expense of the working classes. Our newest video tackles wage theft -- the various ways that employers save a buck or two by stealing from employees.

Wage theft is a crime, but we don't treat it like one. According to the Economic Policy Institute, the total amount stolen from workers far eclipses the total amount from all bank, gas station and convenience store robberies in 2008.

Los Angeles is the Wage Theft Capital of the United States, where $26.2 million is stolen from workers every week. That's why Brave New Films joined forces with the Los Angeles Coalition Against Wage Theft to demand that the LA City Council address this problem. In our video, we profile four victims of wage theft who tell heartbreaking stories of working for low wages and then suffering the indignity of not being paid. We took the video to City Hall Tuesday morning to urge the council to take action.

Wage theft takes many forms. Sometimes, a restaurant manager will schedule an employee for 9 a.m., but tell them not to clock in until 10, if the restaurant isn't that busy. Or tell them to clock out and then clean up the kitchen for another hour off the clock. Construction workers' invoices are underpaid. Meal and rest breaks are violated. Overtime isn't paid properly. Or, worst of all, work goes completely uncompensated. There's a word for working for free and I don't mean "volunteer."

This situation disproportionately affects low income workers, people of color, and LA's large immigrant populations, some of whom are least able to fight back. And if they do, the procedure for reclaiming wages is long and often unsuccessful. Even if they win their claim, only 17 percent of workers actually have any of their wages restored.

It's essentially a dare. Employers know full well there is little chance of getting caught stealing.

They're hiding behind the bureaucracy that's meant to regulate them!

Wage theft is not hard to understand and the solution is even easier to grasp. Los Angeles and California (and just about everywhere) have laws on the books to tackle this problem. In LA, we've simply not enforced this consistently or strongly. A new ordinance was introduced by Council Members Koretz and Cedillo that will increase penalties on scofflaw employers and beef up enforcement.

Getting paid for the work that you do shouldn't even be an issue. In Los Angeles, it's up to the City Council to make sure every you keep every dollar your earn.