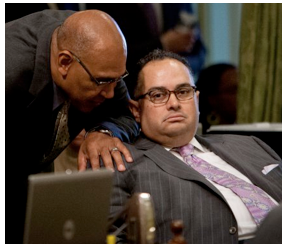 WHO WE ARE-To demonstrate his passion to serve as Secretary of State for the great State of California, Alex Padilla, the lackluster Democratic senator from Pacoima, proposed legislation that would impose a blackout on political fundraising at the end of legislative sessions.

Such legislation, he said, would be “good public policy … shows we are serious about reform and committed to separating fundraising and votes.”

Not to be outdone in the light of three Senate Democrats facing jail time for various acts of public corruption like bribery and perjury, Senate Republican Leader Bob Huff of Diamond Bar proposed  what he called the “toughest ethics and campaign finance reforms” that get to “heart of the political corruption charges.” The legislation would require reporting of contributions within 72 hours, bar use campaign funds for criminal defense, double penalties for taking bribes and ban paying immediate family members out of campaign funds.

“Californians deserve an honest government and shouldn’t have to question the ethics or integrity of their elected leaders,” he declared.

Of course, Huff and his GOP colleagues waited until a week before the June primary to announce their proposal in hopes that somehow they could remove their status as politically irrelevant and allow them to become a legitimate minority party with one vote more than a third of the seats so they could at least have some legislative leverage.

True to form with the primary election out of the way, both Padilla’s and Huff’s reform bills were killed in committees where enough Democrats and Republicans found common ground on an important issue for the first time in ages to make sure unethical conduct continued to be encouraged.

All is not lost for those few who still hold out hope for honesty and integrity in our government – the king of unethical political conduct in the legislature, at least among those not already criminally indicted, appears to be on his way out of public office.

With nearly four million votes counted and only 6,000 still to go – all but four in largely rural Lake County north of Santa Rosa – Speaker John Perez (photo) is running third nearly 900 votes behind Democratic Sen. Betty Yee for the right to face Ashley Swearengin, the Republic mayor of Fresno, in November.

Perez, a cousin of  Antonio Villaraigosa and living proof that good looks and charm don’t run in the family, is the living embodiment of all that is overblown and smug about the Democratic Party these days.

To Perez, politics is all about money and power, ruthlessly using one to get the other. Public policy and the well-being of the state and its people count for nothing.

As Speaker he used the power over the purse strings to punish even members of his own party who didn’t roll over to his demands which according to some amounted to a “shakedown” for campaign cash to fill his coffers. Those who raised the most and gave much of the fruit of their peddling of favors  like Bob Blumenfield and Mike Gatto were rewarded the plum juice committees to help them raise even more to enhance the Speaker’s power and control.

According to Secretary of State records, Perez spent more than $800,000 up to May 17 in the Controller’s race and still had more than $1.8 million in the kitty for the closing days or the runoff.

Ambitious as he is, Perez has nearly $500,000 in the bank to fund his race for lieutenant governor in 2018 four years from now plus more than $600,000 for a ballot measure committee called “Building California’s Future.”

Having a big hand in creating the state’s fiscal crisis, Perez refused to reveal the cost of Assembly staff and operations even authorizing spending hundreds of thousands of dollars to fight the LA Times and Sacramento Bee which demanded the information under the California Public Records Act.

He spent even more taxpayer money suing state Controller John Chiang, the man who hoped to succeed in that office, for carrying out state law enacted by voters and ordering two weeks of legislators’ pay withheld after the Democrat-controlled legislature approved a budget that was not balanced.

The list of misdeeds in office goes on and on, like failing to conduct a required audit and never carrying out his promise to appoint a task force on “transparency and accountability.”

What would you expect from a guy who has claimed over and over he is a Cal grad when in fact he was a Cal dropout.

Scandals and incompetence like we have seen in the legislature don’t just happen. It takes leaders like John Perez to set the tone.

The wonder is voters actually saw through it statewide and Perez is now down to his last thin hope to salvage his political career.

Assuming 2,500 of the remaining votes in Lake County go to Republicans then Perez would have to get nearly two-thirds of the rest to catch Yee and finish second, which is unlikely given the statewide vote and the fact that the county voted in favor of Proposition 8, the anti-gay marriage measure, despite a strong Democratic advantage in voter registration.

What’s good for the state of California might not be so good for LA.

Perez won election to the Assembly from a district stretching from the Eastside to South LA by margins of 83 to 100 percent.

With a City Council made up of eight former legislators, six former city staffers and a former school board member, the City Hall political machine surely will find a place sooner than you think for a guy like John Perez who would fit in so perfectly.

(Ron Kaye is a lifetime journalist, writer and political observer. He is the former editor of the Daily News and the founder of the Saving LA Project. He writes occasionally for CityWatch and can be reached at Ron@RonKayeLA.com)