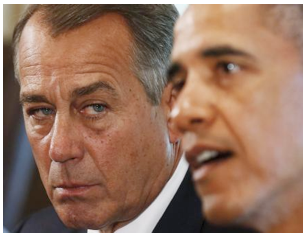 POLITICS-After going out on a not-so-wobbly limb to suggest that Republicans would push to impeach President Obama if they succeeded in retaking the Senate, George Will’s Sunday column read like a real threat.

Fed up with what he views as Obama’s “offenses against the separation of powers,” the conservative columnist advocated that Congress sue the executive branch to stop a lawless president. Yesterday, Speaker John Boehner told the House Republican caucus that he was contemplating such a step.

According to Roll Call, Boehner “could have an announcement within days on whether the House will file a lawsuit against President Barack Obama, challenging the executive actions that have become the keystone of the administration.” The paper reports that the speaker has been consulting legal experts as part of his deliberations. (Read the rest … including the theory on which the litigation would be based … here.)