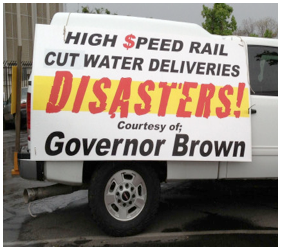 LA WATCHDOG-Last week, Councilmembers Tom LaBonge and Felipe Fuentes introduced a motion requesting that the California High Speed Authority update the Sacramento dominated City Council on the “progress” of the High Speed Rail project “in light of the renewed attention and funding.”

But once again, the City Council’s credibility is on the line as Angelenos want a fair and balanced presentation of the issues, including the finances of this increasingly controversial project and whether the 25% allocation of the cap-and-trade greenhouse gas emissions fund is an efficient and legal use of this money.

In November of 2008, 53% of the voters approved Proposition 1A, the Safe, Reliable High-Speed Passenger Train Bond Act.  This authorized the State of California to issue almost $10 billion in bonds to help finance the $33 billion high speed rail system from Union Station to San Francisco.

The principal and interest payments of $650 million a year would be paid for by the State’s General Fund.

The bond measure specified that the “maximum nonstop service travel time” between Union Station and San Francisco not exceed two hours and 40 minutes; that the system would not require a local, state, or federal operating subsidy; and that all funding would be arranged in advance of any construction.

However, the cost has ballooned to from $33 billion to $68 billion which is actually down from a 2011 estimate of $98 billion. But this required that the Bullet Train operate in a “blended” system. This means that so called Bullet Train has to coexist with commuter trains and even slower freight trains in the LA and San Francisco metropolitan areas.

As a result of the reliance on the much slower ‘blended” system, the travel time between Union Station and San Francisco will be considerably more than the bond mandated 160 minutes, a clear violation of the terms of the Proposition.

It also appears that the Bullet Train will need a significant operating subsidy as original ridership and revenue projections were overly optimistic (despite a near doubling of ticket prices) while initial operating, maintenance, and equipment costs were underestimated by the California High Speed Authority, a politically appointed body whose members do not have adequate managerial experience or industry expertise to oversee one of the largest infrastructure projects in the world.

The financing plans for the entire $68 billion system are up in the air, relying on questionable allocations from the cap-and-trade greenhouse gas emissions fund; unsecured federal grants; and highly speculative private capital for $48 billion, representing over 80% of the required funding.

The State’s most recent budget allocated 25% of the cap-and trade revenues to the Bullet Train.  However, these funds are not bankable as the State’s Legislative Analyst opined that the Bullet Train does not qualify for cap-and-trade money.  Furthermore, the Bay Area Transportation Solutions Defense and Education Fund has filed a lawsuit questioning the methodology used to determine the environmental benefits of this massive infrastructure project.

Other environmental groups have questioned the use of these funds since there are more worthwhile projects that will result in the elimination of significantly more greenhouse gases for every dollar invested.  Others have speculated that the breakeven point between elimination of greenhouse gases versus the emissions spewed during construction is 70 years.

The prospect for Federal funds is unlikely as the new Majority Leader of the House of Representatives, Keven McCarthy from Bakersfield, is an adamant foe, calling the Authority’s business plan “deeply flawed.” This caused him "serious concerns with the Authority's finances and how they plan to come up with the tens of billions of additional funds needed to complete the project."

The Bullet Train is so unpopular that four California Democratic members of Congress* who are in competitive races voted to block the allocation of funds to the “beleaguered” Bullet Train.  But this political maneuvering is to be expected as almost 60% of the voters are now opposed to this boondoggle.

The Bullet Train is also bogged down in litigation, including a recent opinion by Sacramento County Superior Court Judge Michael Kenny that the State violated the law by not presenting a legitimate funding plan that met all the environmental hurdles.

The direct and indirect costs of this $68 billion project is in the range of $4.4 billion a year (6.5%), of which $440 million (10%) will hit Angelenos.  This is the equivalent of an 11% increase in our real estate taxes or about an increase of 1% in our sales tax.  This also assumes the unlikely event that there will be no cost overruns.

Before proceeding with a one sided dog and pony show with the California High Speed Rail Authority, the Herb Wesson led City Council should instruct the City Administrative Officer and the Chief Legislative Analyst to prepare an unbiased report on the Bullet Train and its finances and its impact on the State budget and Angelenos.

A thorough and independent review and analysis of the so called Bullet Train would be an excellent way to start the long process of gaining the trust, confidence, and respect of the voters.