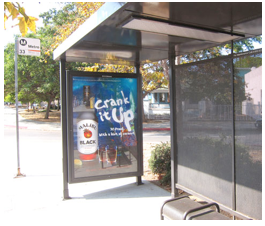 BILLBOARD WATCH-Ads for beer, whiskey, vodka and other alcohol beverages commonly seen on bus shelters, kiosks, and other items of street furniture became an endangered species yesterday when the City Council directed the City Attorney to draw up an ordinance banning such advertising on city-owned property.

The ban, approved by a unanimous vote, would exempt property under control of proprietary city departments as well as city-sanctioned events at which alcohol is sold. Those beverages could continue to be advertised at LAX, at parks and recreation facilities, at harbor facilities, and at the city convention center.

And while alcohol could no longer be advertised on the city’s thousands of bus shelters and kiosks, the ban would not take effect until the city’s street furniture contract with CBS/Decaux expires in 2021.

Alcohol advertising is already prohibited on bus benches, which are under a separate contract, and on the city’s commuter and DASH buses. The LA County MTA also prohibits alcohol advertising in its transit stations and on its buses and trains.

The ordinance was originally sponsored by former Councilman Richard Alarcon, but was taken up by Councilman Paul Koretz year after Alarcon’s council term ended last year.  It had been pushed for more than three years by the Coalition to Ban Alcohol Ads on Public Property, an organization comprising more than 25 local groups working on issues of substance abuse and community health.

Supporters have cited studies showing that young people most likely to abuse alcohol are also the age group most influenced by alcohol advertising .  Statistics also show that the accidents, crime, and other negative effects of alcohol abuse and addiction cost the city millions of dollars a year for law enforcement and emergency services.

Nobody spoke in opposition to the ban at yesterday’s council meeting, or in prior committee meetings, although in the past some council members have expressed concern about the city’s share of street furniture revenue being reduced if alcohol ads were prohibited.  A city report estimated that loss at $4-600,000 per year, although it said some of that amount could be offset by other types of advertising.

(Dennis Hathaway is the president of Ban Billboard Blight and an occasional contributor to CityWatch. He can be reached at: [email protected])