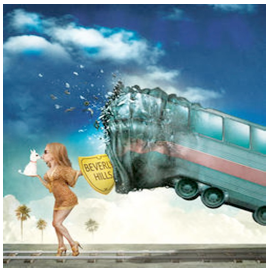 WHO’S PAYING FOR THE SUBWAY SABOTAGE?-There it was on my screen. And oh, how I wish I'd written the headline: "Beverly Hills Unified's Legal Fight Against Purple Line Subway Route Paid for With School Construction Bonds."

Of course the Beverly Hills School Board was misappropriating money meant for its students to pay for its meritless litigation and media campaign against the Wilshire Subway extension. Why had it taken us so long to put two and two together?

Even in Beverly Hills, money doesn't grow on trees.

How else could "public servants" like John Mirisch, Brian Goldberg and Lisa Korbatov find the war chest to stand in the way of progress?

The School Board's three stooges' irrational opposition to the exhaustively studied route for the subway tunnel is nothing short of the equally myopic decades-old resistance Congressman Henry Waxman demonstrated until 2006 in forbidding federal spending on subway tunneling.

It was way back in 1985, that King Henry sponsored a bill supported by heavy hitters in his district to ban federal funding for the Westside subway after a methane gas explosion at a Ross For Less store in Fairfax.

It cost a lot to not build the subway. Just ask the generations of Angelenos who needlessly spent decades commuting east and west by car rather than by subway because of the intransigence of the powerful legislator and others. I am not saying that Congressman Waxman took money from Westside NIMBYs to stand in the way of transit to the Westside, but countless others have.

Are we're not talking pocket change. LA's failure to build the Subway to the Sea when it should and could have means it will now cost us billions of dollars more to bring the train to the Westwood VA rather than all the way to the Pacific Ocean. And that's if we are lucky.

I will grant them this: Soon-to-be-former Congressman Waxman has unusually able imitators in Mirisch and the others on the Beverly Hills School Board. Thanks to an asleep at the wheel Beverly Hills electorate, the School Board has for too long used the bully pulpit to throw up obstacles to the subway at every turn.

Of course the jury is still out on whether the School Board also spent north of $3 million of voter approved school construction funds on litigation opposing the train.

What we do know is, it sure smells bad. So bad that even one-time Waxman ally on no tunneling Supervisor Zev Yaroslavsky is saying so.

I expect that I am not alone among commuters who feel that stiff personal monetary sanctions and even jail for former and current School Board members who promulgated this charade against the subway on the public teat would be just desserts.

With public accountability and transparency in Beverly Hills at an all-time low, what a fine message sanctions and jail would send to those whose transgressions go against the greater good of public infrastructure improvements like transit.

It has been heartening to watch as court after court rules in favor of Los Angeles Metro and the public interest with regard to the School Board's meritless litigation against the subway.

Now it is time for the courts and public to sit in judgment of the School Board. Like the tunneling itself, that judicial proceeding should proceed with all deliberate speed.

(Joel Epstein is Chief Talent Officer at bliss lawyers and a Los Angeles based strategic communications consultant focused on transportation and other critical urban issues … and an occasional contributor to CityWatch. For more about Joel visit: blisslawyers.com or JoelEpstein.com.)