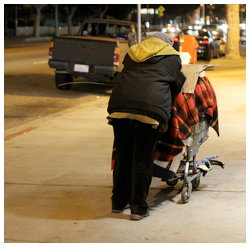 ALPERN AT LARGE-It's not hard to conclude that--as a society--we like to talk about, and politically exploit, the homeless problem but we're not willing to actually fix it.  Perhaps it's because some of us like partisan politics (and that goes both ways, doesn't it?), and perhaps it's because we're intolerant (and tolerance also goes both ways, doesn't it?), but it's also not hard to conclude that a lot of us really, REALLY want this problem solved.

As I stated in my last CityWatch article on the thorny issue of transportation, money is an issue...but the real issue here is of political will to fix this thorny problem.  And our homeless problem IS one that's going to derive some rather unsavory answers if it's not confronted in a realistic manner.

For example, the Downtown Los Angeles high-rise pedestrian bridge between two apartment buildings so that the residents don't have to confront the homeless encampments on the street below.

Whether it's building high-rise bridges above the homeless, or fleeing into tony and cost-prohibitive areas of the City, this town suffers from all sorts of "liberal, open-minded and caring" folks who do and say all kinds of things to assuage their guilt and rationalize their exclusive-only attitudes toward the homeless.

Yet some of us can't do that, or won't do that--as a physician married to a social worker, and whose favorite portion of my third-year student core clinical curriculum was Psychiatry, I don't look at the homeless and just shake my head.  As someone who treats homeless and near-homeless people every day, I want something to be done--and have a big problem with those who throw roadblocks that prevent the problem from being solved.

Certainly, the discussion and history of homeless can be traced to the dawn of Humanity--but with the end of the open frontier of the United States, and the virtual end of one's ability to be anonymous and left alone in an urban or suburban environment, the reality of sharing an ever-smaller city, county, state or nation is getting harder to ignore.

Yet what's complicating this problem's solution is--in addition to the aforementioned guilt and its associated lack of will for action--the addled or agenda-driven bobbleheads who keep popping up and shouting down the problem-solvers.

BOING!  Try to fix the problem ... and then it's "You don't care about the homeless!"

(Huh?  I thought we DID want to take care of the homeless!)

(Huh?  I thought we DID want to take care about the mentally ill!)

... and so on, and so on.  Yet add these bobbleheads to the addled and creepy ranks of the "homeless rights lawyers" who claim that the homeless have the right to live and sleep anywhere they want, and it's easy to see why some just will build their high-rise bridges, or move to the expensive and cost-exclusive areas of town, just to avoid the seemingly-unfixable headaches of solving the problems of homeless and public safety.

But the fact remains that the homeless are and always will be human beings, and are like the rest of us God's children who are our responsibility to help.

Fortunately, even those oft-demonized conservatives who increased mental health funding after the horrific Sandy Hook shooting, and those oft-demonized conservatives who passed Laura's Law to pay for and require appropriate mental health facility placement for individuals who are a danger to themselves and/or others, "get it" that something must be done to address the issues surrounding homelessness.

Can we do that in open-minded, compassionate and liberal Los Angeles, too?

Maybe not, considering that the Los Angeles City Council and the LAPD can't (or won't) even take action against owners of RV's who knowingly and illegally park their vehicles on public thoroughfares to the detriment of traffic flow and quality of life in our City's neighborhoods.

The problem, again, is that the City Council and the LAPD don't have the stomach and/or backbone to call out, take on, and take down the lawyers and histrionic screamers who thwart the majority will to fix our City's homeless problem...and, of course, other cities and states have no problem dumping their homeless to this town because they know we'll just ask our City's otherwise-caring and law-abiding resident's to "deal with it".

Yet there ARE those who've tried a solution, and they deserve credit for it.

Social worker and then-City Councilmember Bill Rosendahl and his then-chief-of-staff Mike Bonin (now Rosendahl's successor) deserve major props for trying to assist with both illegal RV's and the homeless.  They wanted a place for the RV owners/homeless to go, and that could, in theory, both help those who needed it and clean up our neighborhoods.

I'm sure that Rosendahl and Bonin have a different take and approach towards the homeless that this moderate-to-conservative CityWatch writer does, but they DID show courage and WERE onto something.

I'm not entirely certain where the "right" places should be, but there DOES need to be a place (or places) where social workers, mental health workers, physicians, employers and even law enforcement needs to go to help the homeless get their lives together.

Because...well...NO, I do NOT believe that mentally-ill individuals, or anyone else, have the "right" to camp themselves on public or private property at the suffering of others.  The mentally-ill, and anyone else, certainly have the "need" (and, to some degree, the "right") to live somewhere because they have nowhere to go, so it behooves us as a society to figure out where those who need help can go to get that help.

In a nutshell, and with the understanding that the following can easily be subdivided and redefined, there are three main groups of homeless:

2) Those who are mentally-ill and/or who have substance abuse problems--these are the individuals who MUST be diagnosed, who have a VERY high rate of recidivism (over 50% when it comes to schizophrenics), who MUST have virtually life-long supervision of both medication, counseling and healthcare, and who MUST be placed outside of our prison system if they are nonviolent yet placed in some type of incarceration if they do pose a threat to the general public.

3) Those who just want to live a life without bills or hassles or responsibilities--maybe these individuals, too, are among the mentally ill, but for those familiar with the terms "ego-syntonic" versus "ego-dystonic" or with the term "personality disorder", these individuals are quite "sane" by medical standards, and they should have two options:  get help and get with the program...or get out of the City, courtesy of a legally-approved LAPD escort.

A recent CityWatch article recently got distracted from addressing the benefits of Laura's Law, and from the benefits of confronting mental health and the homeless, and from the safety of both the homeless and general public, because that article's author was more focused on attacking the late Ronald Reagan than addressing mental health and homelessness.

Which is a pit y... because Laura's Law (Look it up!) and the homeless issue isn't just something to blame on one individual or one party, and problems surrounding the resolution and payment for that resolution will have to be paid for and confronted by everyone, and in all political parties.

If it makes political sense to blame both sides of the political aisle, and to blame each and every one of us, for getting us to this current sad, sorry state of affairs then so be it.  A "blame-free do-over" might just fix our City's own inertia and renew L.A.'s resolve to get the homeless off the streets and into safe, sane, and supportive places to live.

Or we can just keep building bridges over, and moving away from, those "awful and ugly homeless" people who need to be dealt with by someone...else.

(Ken Alpern is a Westside Village Zone Director and Boardmember of the Mar Vista Community Council (MVCC), previously co-chaired its Planning and Outreach Committees, and currently is Co-Chair of its MVCC Transportation/Infrastructure Committee.  He is co-chair of the CD11 Transportation Advisory Committee and chairs the nonprofit Transit Coalition, and can be reached at [email protected]. This email address is being protected from spambots. You need JavaScript enabled to view it. He also does regular commentary on the Mark Isler Radio Show on AM 870, and co-chairs the grassroots Friends of the Green Line at www.fogl.us .   The views expressed in this article are solely those of Mr. Alpern.)