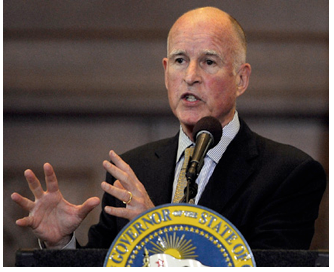 NO ON RAINY DAY FUND-Governor Jerry Brown is aggressively pushing a California state constitutional amendment requiring budget surpluses to be used to pay down municipal debt and create an emergency “rainy day” fund, in anticipation of the next economic crisis.

On the face of it, it is a sensible idea. As long as Wall Street controls America’s finances and our economy, another catastrophic bust is a good bet.

But a rainy day fund takes money off the table, setting aside funds we need now to reverse the damage done by Wall Street’s last collapse. The brutal cuts of 2008 and 2009 shrank the middle class and gave California the highest poverty rate in the country.

The costs of Wall Street gambling are being thrust on its primary victims. We are given the choice of restoring much-needed services or maintaining austerity conditions in order to pay Wall Street the next time it brings down the economy.

There is another alternative – one that California got very close to implementing in 2011, before Jerry Brown vetoed the bill. AB750, a bill for a feasibility study for a state-owned bank, passed both houses of the state legislature but the governor refused to sign it. He said the study could be done by the Assembly and Senate Banking Committees in-house; but 2-1/2 years later, no further action has been taken on it.

Having a state-owned bank can substitute for a rainy day fund. Banks don’t need rainy day funds, because they have cheap credit lines with other banks. Today those credit lines are at the extremely low Fed funds rate of 0.25%. A state with its own bank can take advantage of this nearly-interest-free credit line not only for emergencies but to cut its long-term financing costs in half.

That is not just California dreaming. There is already a highly successful precedent for the approach. North Dakota is the only state with its own state-owned depository bank, and the only state to fully escape the credit crisis. It has boasted a budget surplus every year since 2008, and its 2.6% unemployment rate is the lowest in the country. Contrast that to California’s, one of the highest.

In a 2009 interview, Bank of North Dakota President Eric Hardmeyer stated that when the dot-com bust caused North Dakota to go over-budget in 2001-02, the bank did act as a rainy day fund for the state. To make up the budget shortfall, the bank declared an extra dividend for the state (its owner),  and the next year the budget was back on track. No massive debt accumulation, no Wall Street bid-rigging, no fraudulent interest-rate swaps, no bond vigilantes, no capital appreciation bonds at 300% interest.

California already has a surfeit of surplus funds tucked around the state, which can be identified in state and local Comprehensive Annual Financial Reports (CAFRs). Clint Richardson, who has made an exhaustive study of California’s CAFR, writes that he has located nearly $600 billion in these funds. California’s surplus funds include those in a Pooled Money Investment Account managed by the state treasurer, which currently contains  $54 billion earning a mere 0.24% interest – almost nothing.

The money in these surplus funds is earmarked for particular purposes, so it cannot be spent on the state budget. However, it can be invested. A small portion could be invested as capital in the state’s own bank, where it could earn a significantly better return than it is getting now. The Bank of North Dakota has had a return on equity ranging between 17% and 26% every year since 2008.

California has massive potential capital and deposit bases, which could be leveraged into credit, as all banks do. The Bank of England just formally admitted in its quarterly bulletin that banks don’t lend their deposits. They simply advance credit created on their books. The deposits remain in demand accounts, available as needed by the depositors (in this case the state).

The Wall Street megabanks in which California invests and deposits its money are not using this massive credit power to develop California’s economy. Rather, they are using it to reap short-term profits for their own accounts – much of it extremely short-term, “earned” by skimming profits through computerized high-frequency program trading. Meanwhile, Wall Street is sucking massive sums in interest, fees, and interest rate swap payments out of California and into offshore tax havens.

Rather than setting aside our hard-earned surplus to pay the piper on demand, we could be using it to create the credit necessary to establish our own economic independence. California is the ninth largest economy in the world, and the world looks to us for creative leadership.

“As goes California, so goes the nation.” We can lead the states down the path of debt peonage, or we can be a model for establishing state economic sovereignty.

(Ellen Brown is an attorney and founder of the Public Banking Institute.  She is the author of twelve books, including her latest book, The Public Bank Solution, which explores successful public banking models historically and globally. This piece was posted most recently at CommonDreams.org)