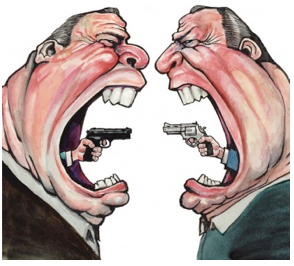 GELFAND’S WORLD-I was having a polite chat in the hallway when all of a sudden, shouting broke out inside the meeting room. The Los Angeles Neighborhood Council Coalition is usually a fairly discreet group, but this time around, things got heated. The yelling was about an already much abused tool that the Department of Neighborhood Empowerment likes to use. It's called exhaustive efforts, and in the hands of DONE, is equivalent to the city taking over control of a neighborhood council. It's like putting you and your colleagues into receivership. If the Board of Neighborhood Commissioners has its way this Tuesday night, May 6, exhaustive efforts will be the fate of neighborhood councils that forget to post paper notices of 4 committee meetings over the course of a year.

Such a ridiculous bit of bureaucratic overreaching demands a public airing, so let's have at it.

As we've explained to our CityWatch readership in previous stories, there has been a long running argument over the demand that our neighborhood councils post notices of upcoming meetings. It shouldn't be that much of a problem, and I don't intend to rehash it here. The state's open meeting law, colloquially referred to as the Brown Act, requires that meetings of legislative bodies be announced to the public 3 days in advance.

That's about it. If you are a city council or a neighborhood council governing board, you are supposed to post a printed agenda in a place that anybody can get to, and you have to do this at least 72 hours in advance.

The purpose of the Brown Act is to protect the public interest by letting the news media  know in advance that a meeting is going to occur, and what the meeting will be about.

Serial aviacide, you might call it. If you think about it, it's a remarkably cynical idea, this underlying belief that the city government would never advertise the existence of its own neighborhood councils. So the unpaid, volunteer council members would have to do it on their own.

It was inept and untimely. After a decade or so, we've come to understand that there are better ways to do outreach than posting letter sized pieces of paper in odd locations.

I mean, there's this thing called the internet, there's another invention called email, and there are even cell phones which can display text messages. We're one-seventh of the way through the twenty-first century, and the BONC hasn't figured any of this out yet.

So here we are, in the situation I predicted a couple of months ago. The BONC is willing to reduce the posting limit to 1 per meeting, but it feels some sort of primal need to threaten us with punishments most dire if we should stray from the new list of rules.

So that's what the shouting was about at the LANCC meeting. It started over a discussion of a proposal that will presumably be taken up on Tuesday night at the BONC meeting in Wilmington. One group of BONC commissioners is willing to entertain a proposal to elevate posting failure to a major infraction, and to punish entire governing boards for this failure.

Here's the text of the item that will probably come up at this Tuesday's meeting, since the document it is taken from is linked in the BONC agenda:

"If a Neighborhood Council is found to be in violation of this Policy three (3) times within the current fiscal year the Board and any non-Board member committee chairs shall be required to take additional training as may be determined by the Department. If after receiving additional training the Neighborhood Council is again found to be in violation of this policy during the current fiscal year, then exhaustive efforts to remedy this matter, including loss of funding may be taken by the Department pursuant to Article VI section 4 and Article X section 3 of the Plan for a Citywide system of Neighborhood Councils."

Notice that the rule, if passed, gives DONE power over your lives, in the sense that it can demand you take its training. Of course you could always quit, but that punishes you and the people who voted for you. If the mandated training fails, in the sense that some committee chair sometime in the future forgets to do another posting, then the whole neighborhood council goes down the tube, into those exhaustive efforts.

OK, so each of these steps is not an automatic. There is a certain amount of wiggle room, most notably the fact that you might miss a posting but not get caught. Or DONE might look the other way because it is understaffed. Remember that line, because I plan to come back to it later.

Of all the requirements put upon us faithful, unpaid volunteers, the posting requirement is pretty close to the most useless. People find out about neighborhood councils or they don't, but it's not because of the presence or absence of pieces of paper tacked up in obscure locations.

So why would the BONC decide to take up such a self-destructive  policy?

In a word, they're young, or at least young in the job.

It's not exactly a revelation that newcomers to the Board of Neighborhood Commissioners start out by looking for ways to help us. Take that word "help" as a euphemism for making new rules and coming up with ways to punish us if we get out of line. Of course they can't cut our salaries because we have none. Instead, each new BONC generation goes through a phase in which it thinks about how to force us to take some kind of mandatory training about irrelevancies, even as it misses the point about how it actually could make the whole system work better.

If you are interested in standing up for your dignity, come to the Tuesday, May 6 meeting of the BONC [and give them an earful].

By the way, this BONC agenda also has that list of all the additional training that the commission wants to start requiring of you. Hint: You're not going to get paid for your time. The list includes ADA compliance, sexual harassment, and finance, and in addition, invites DONE to offer classes in several more topics including -- get this -- leadership.

And one more thought that DONE should really consider carefully. Giving DONE more power to run roughshod over neighborhood councils is not actually in DONE's best interests. For one thing, it gives neighborhood council participants a strong incentive to oppose any additional funding for DONE. That's because giving DONE more bodies provides for more enforcement of the already silly rules. Cutting DONE staffing to the bone and keeping it that way is the most effective way of preventing unnecessary enforcement of destructive policies. And remember that the current more benign leadership at DONE may not always be with us. Not much more than half a dozen years ago, we had some rough going with the city. What's to guarantee it won't happen again? So DONE should be careful what it wishes for, if nothing else out of a sense of its own self preservation.

It's all an exercise in waste and futility. As one of my longtime colleagues points out, this obsession with rules and bureaucracy ensnares us in process while undercutting outcomes. And as another colleague pointed out long ago, the city is heading towards regulating us out of existence.

A Cultural Heads-Up for next weekend\

Long Beach Opera, in its usual insane, wonderful way, brought back a piece originally composed by Stravinsky and updated two-thirds of a century later by Kurt Vonnegut. It's called An American Soldier's Tale. It's somewhere between an opera and a chamber orchestra piece, because the 3 performers don't sing. They recite and speak and dance. Meanwhile, the outstanding 7 piece band develops the musical side. The score is tuneful and rhythmic, without the dissonant blasts we know from Rite of Spring. Violinist Alyssa Park wins over the audience. Tony Abatemarco plays the general and also plays a Red Cross nurse. Not kidding about this -- The Old Campground meets camp in his excellent dual performances. Mark Bringelson, an LBO regular, plays the Military Policeman and also doubles as a different Red Cross nurse.

Kevin Reich plays Private Eddie Slovik, the only American soldier to be executed for desertion in the entire time between the Civil War and the end of WWII. Vonnegut took this true story, and used the music from the 1918 Stravinsky piece. In Vonnegut's updated wording, the language is a kind of profane rhyming. Definitely not safe for work. Reich is particularly compelling when he reads from the Army's manual that prescribes how to conduct an execution by firing squad.

In the second part of the program, LBO presented A Fiddler's Tale. It's the Wynton Marsalis reply to the Stravinsky/Vonnegut piece. It uses the exact same orchestration, and makes the female violinist part of the plot line. But the plot is entirely different, being a sort of modern version of Faust. Roger Guenveur Smith carries the entire vocal end of the performance, doing the voice of the devil and also doing the lines for the female violinist; he does triple duty as a narrator, switching back and forth among the characters and once in a while doing expressive dancing. The music goes into different places as the plot simmers, reminding one of Ozark mountain music at times, a little like Mahler at other times, and big band swing at still others. The Marsalis piece could have been written to be a little shorter, as it ran at slightly over  70 minutes.

There is only one more performance, on Saturday, May 10, at the Center Theater in Long Beach. Getting Stravinsky and Marsalis on a double bill is a can't miss.

(Bob Gelfand writes on culture and politics (and in this case, in the same column) for CityWatch. He can be reached at [email protected])