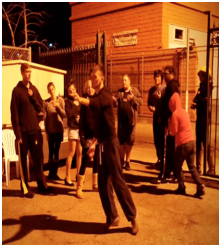 GELFAND’S WORLD-The TE San Pedro Rep (TE Rep, or TESPR for short) came to town as a collection of talented people taking over an unlikely space in an area more known for artists' lofts than for the upscale. Their working area consists of two tiny rooms connected by a hallway, and a yard facing onto a back alley. Making virtue out of necessity, they have now adapted this entire space for a production that is, in essence, an amalgam of My Fair Lady and its theatrical precursor, George Bernard Shaw's play Pygmalion.

In the tension between the two versions, Shaw's rather more realistic, less Hollywood version wins out. The TE Rep musical play Wouldn't It Be Lovely manages to build a story around Liza Doolittle as a real person with needs, and ultimately a deep strength of her own. This message is present in Shaw's play, but was downplayed in the musical. It's an auspicious debut for Columbia trained actress, dancer, and singer Paris Langle.

As most anyone with a pulse remembers, the original Shaw story and its Broadway offspring involve a professor of phonetics named Henry Higgins. His work seems to involve our modern academic subject called linguistics, along with a side trade in teaching proper pronunciation to those who wish to be upwardly mobile. It's the 19th century, verbal form of plastic surgery.

In the Shaw play, Henry Higgins takes on his greatest challenge, when he more or less playfully boasts that he can turn an illiterate flower peddler into someone who will pass for an upper class woman. It's curious that Shaw seemed to believe his own message, namely that teaching people to sound like the upper class would allow them to participate in the upper class.

At least that's what he says in his notes. It's not clear to me whether Shaw was just having a little fun with the reader, but the deeper, more despairing view of class separation in England can be found in the essays of George Orwell, who would find Shaw's remarks naive. Later generations of thinkers have largely sided with the Orwell position.

Shaw's Pygmalion was later adapted in the form of a musical play, My Fair Lady, which combines musicality with a rather cartoonish version of Shaw's recognition of class warfare. In order to build a storyline around musical numbers and send the audience home happy and humming, the production of My Fair Lady downplayed Liza Doolittle's real life issues, turning her concerns about what her life would be after Henry Higgins into something of a laugh.

In our more modern era, the idea that Liza Doolittle would be a person who recognizes at some level not only the existence of class structure, but what we call, for lack of a better term, institutionalized sexism, should be obvious.

My Fair Lady was one of the biggest Broadway hits of all time. Julie Andrews and Audrey Hepburn were Eliza in the Broadway and film versions, respectively. The musical has contributed songs that have become embedded in our culture. Most of us still know them, so when the TE Rep cast starts humming the song Loverly, we immediately get it.

There are differences between My Fair Lady and Pygmalion -- The TE Rep takes the music from the one and the thematic elements from the other. It then moves the story to New York City, stirs in dance numbers of a distinctly modern style, and even tosses in a few moments where one character gets to walk through the assembled cast while they are frozen in time. West Side Story, meet Star Trek meet La Boheme.

In discussions with the cast and the director, I was informed that this production takes off on what has been called Immersive Theater, a style in which the audience is invited to move from place to place. The New York performance Sleep No More invited audience members to wander through the rooms of a fictionalized hotel, where the elements of Shakespeare's MacBeth were laid out.

TE Rep is a little more structured. We begin in the courtyard facing on the back alley, with most of the audience standing around. We are introduced to the main characters and the theme song Lovely (essentially Loverly from My Fair Lady, with the odd change of lyric every now and then to modernize the story), and are eventually taken by the arm by a cast member and escorted into the next playing area.

This is definitely "breaking down the fourth wall" with a vengeance. The old style of a character walking to the front of the stage and talking directly to the audience was revolutionary in its time. This staging, with direct contact between the performers and the audience, takes it to another level. We get a hint that things are going to be different at the very outset, where the players first walk, then run through the audience, brushing us aside, as if we are on a subway platform or in a crowded city square.

The physical contact between players and audience members is not the only radical element. During an intermission which is not quite an intermission, the players come around and introduce themselves to audience members one by one -- imagine that happening at the Geffen! At one point, the cast invited the audience to join in a dance number. It's not mandatory, but quite a few did.

It's not enough to engage in gimmicks just for the sake of proving that you can be novel. There has to be point and purpose. For TE Rep, the purpose, whether ultimately intentional or just the high cost of renting space, is to bring the performance up front and close. When Eliza comes into Henry Higgins' parlor and sits down to fret, pout, and beg, she is among us. Higgins is in the same small room with us, as the two engage in emotional battle.

The effect is to allow the acting to be more nuanced and subtle compared to actors working on a stage at a distance from the audience. The closest analogy is with stage vs. film. In film, the actor gets to communicate by small gestures and facial expression. In the TE Rep performances so far (Hamlet, and now Lovely), we are exposed to a performance that is in closeup.

Chris Lang plays the role of Henry Higgins ably. He is a Harvard trained voice coach among other things, and the high standard of diction among TE Rep players speaks well of his efforts. Gugun Deep Singh shows strong comedic chops as Alfred Doolittle, Liza's gutter-rat dad who is willing to sell her for a five pound note in Shaw's play. He's the same guy in Lovely, but the bribe is upgraded to fifty dollars in this modern day.

San Pedro is developing into a theatrical destination, what with TE Rep, Shakespeare By the Sea, and James Blackman's San Pedro Theater Club.  There is also a television pilot in the making called Hand of God, that seems to involve the local courthouse and lots of police cars.

(Bob Gelfand writes for CityWatch on culture and politics. He can be reached at amrep535@sbcglobal.net)